Trending
You are at:Home»Reviews»Graveyard – Innocence & Decadence
By Nick Dunn on February 5, 2016 Reviews, Rock
Band: Graveyard
Album: Innocence & Decadence
Record label: Nuclear Blast
Release date: September 25th, 2015
Facebook & Twitter
Purchase/Download
Tracklisting:
1. Magnetic Shunk
2. The Apple and the Tree
3. Exit 97
4. Never Theirs To Sell
5. Can’t Walk Out
6. Too Much is Not Enough
7. From a Hole in the Wall
8. Cause & Defect
9. Hard-Headed
10. Far Too Close
11. Stay For A Song

In 1966, American psychologist and psychedelic drug advocate Timothy Leary popularised the phrase ‘turn on, tune in, drop out’ as a means of expanding one’s consciousness so as to accept cultural change and detach from current modes of thought. [1] Although the countercultural movement that phrase helped inspire is buried behind the hazy smokescreen of history, Leary’s advice still has currency, particularly with the recent rise of retro-rock, including bands like bluesy Swedes Graveyard. On Innocence & Decadence, their latest album, they have drawn not only from the lighter numbers on their earlier works, but also on the psychedelic rock bands that Leary would have listened to when he made the above statement.

To start with, Graveyard have smoothed off the darker, doomy edge that lurked beneath the swinging blues of both Hisingen Blues and Lights Out. It still lurks in places, such as the gorgeous ‘Exit 97’, and there are flashes in other songs, such as the intro to ‘From a Hole in the Wall’. Overall, however, the album is lighter, and almost jovial compared to their past releases. A factor in this is less emphasis on the bass from ‘new’ face Truls Mörck – who was, in fact, the band’s first guitarist who left just before their first album was released, and has returned to fill the hole left by fellow co-founder Rikard Edlund’s recent departure. Compare the bass-heavy ‘Uncomfortably Numb’ from Hisingen Blues to ‘Exit 97’ here: both songs are soaked in a bluesy, moody atmosphere, but the former has a much more prominent bass line, giving it more weight than the latter track. On the latter, the guitars are free from the weighty bass, and wander into more psychedelic regions, such as the brief but noticeable change in rhythm around the two-minute mark of opener ‘Magnetic Shunk’, or the key changes in ‘Too Much is Not Enough.’

Joakim Nilsson’s vocals further lighten the album: on the previous two, his singing style had a rawer edge to it, evidenced on songs like ‘Goliath’. On Innocence & Decadence, however, his voice is generally calmer and softer. This helps bring the far-out atmosphere across in songs like ‘Can’t Walk Out’, but also allows emotion to pour out of ‘Exit 97’and ‘Too Much Is Not Enough’. That raw edge still comes across though, most clearly on ‘Never Theirs To Sell’ – a song that could easily have fitted on either of the previous two albums. 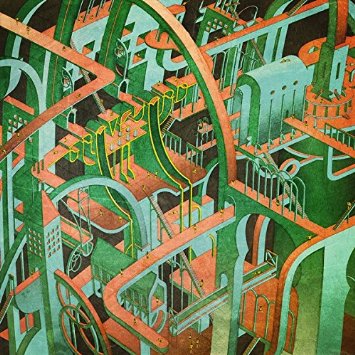 The whole album is, in essence, the sound of the swinging, psychedelic ‘60s, remastered and remixed with 21st century instruments and production techniques. Keyboards evoking Pink Floyd are woven throughout, and there are some splendid Motown-inspired backing vocals on the soulful ‘Too Much Is Not Enough.’ Most impressively, however, they have managed to almost-perfectly replicate the guitar playing of none other than Jimi Hendrix. The guitar solo on ‘The Apple and the Tree’ sounds exactly like something Hendrix would have conjured up, were he still alive and trippin’.

The psychedelia does not just come from the music, however. Note the eye-catching green artwork of a futuristic city, such as might have been imagined in the sci-fi tales popular in the 1960s. A far cry from the Rothko-esque black square of Lights Out and the lake scenery of Hisingen Blues, the artwork perfectly complements the album’s lively, imaginative songs. Images that can only be described as ‘far-out’ spill colourfully from the lyrics: ‘Can’t Walk Out’ argues that “You can’t walk out on the universe”, though clearly no one ever mentioned this to Hendrix, given the amount of acid the man supposedly dropped. The very idea of walking out on the universe, springing as it does from the other lines “We saw you try to walk out on yourself” and “Push, push, push, reality aside/Freak, freak, freak, freak them out and sing” evokes the idea of someone taking Leary’s advice a little too far and dropping out of reality altogether. The refrain of ‘Cause and Defect’ is just as trippy: “It’s like climbing a dream/Tumbling down a failure/Trippin’ on a nightmare/To see that no one is there.”

As a huge fan of Hendrix and the Swinging Sixties in general, it’s a joy to hear Graveyard echo that sound with 21st century packaging. Innocence & Decadence may be lighter in tone than their previous works, but it fits neatly into the canon as a maturation in sound: smoothing over the raw edge to Nilsson’s vocals allows him to communicate the emotions behind his lyrics more effectively, and lightening the bass frees the melody to follow psychedelic paths out of reality with carefree abandon. Graveyard have turned their instruments on, tuned in, and dropped a fantastic record.