Identifying genre is often contentious, especially when a band’s membership comes from diverse musical backgrounds or has consciously decided to bridge the conceptual gaps between. But far from narrowing the artistic potential of a band or solo musician, genre tags can be useful tools with which to find and select musical preferences, providing they remain adaptable and are descriptive rather than prescriptively laying down what music ought to sound like. But this freedom also risks their most useful function being undermined. ‘Sludge’ as a label for a style of heavy rock and metal is in danger of depreciation. As more and more bands of vastly disparate styles are tagged with it, its usefulness as a label and filter grows ever more uncertain. We learn to mistrust it.

In such a treacherous and unstable landscape, London’s Gurt appear as a reliable if more recent landmark, ticking many of the boxes you would expect from a band that has picked up the sludge tag. Through a gaggle of small releases and splits, and impressive support slots for the likes of Weedeater, Cough and Dopethrone, they have been cultivating their brand of drink’n’dance groove rock since 2010, all the while never taking themselves too seriously. And yet, though they meet their quota of bluesy licks and bassy pummelling (especially in their live work), referring to them as a sludge band just doesn’t do. That said, if you enjoyed their first full-length – the upbeat, buzzy beer-swiller that is Horrendosaurus (2014) – you’ll definitely still get your kicks from Skullossus: it is just as much a faithful expression of the band’s persona. But their talent has not been lying dormant the last three years. Here the songwriting has become more involved, the vocals and instrument phrasing more nuanced and the palette broadened.

One thing that has remained static, however, is their sound. Arguably more a question of personal taste, the guitar tones on Skullossus, as with earlier releases, feel rather too well turned out, sober and orderly for the sort of drink-fuelled midnight street party it wants to showcase, and that feels like a missed opportunity. A few tweaks at the controls of amp and pedal is all that would be needed to lift the guitar free from the bass and give rise to a more throaty, unbalanced, analogue sound. 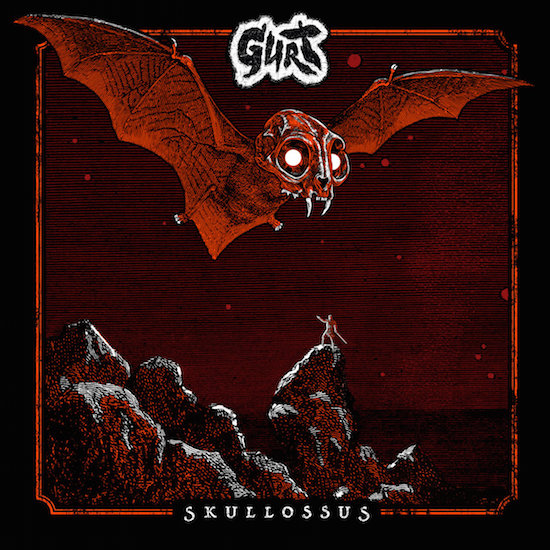 In fairness, there are attempts to shake it up. The most vintage tone, for example, comes on ‘The Crotch Wobbler’, where the guitar finally tears away into its own stratum, and during the lightly funky ‘Existence Is Pain’, the tone becomes akin to pink noise, a sound that is taken through into ‘Broken Heart Heroin Man’ – reminiscent of Mudhoney’s racket.

Style elements are also toyed with. ‘Double Barrelled Shot-pun’ produces surprising moments of chest-slapping and gang vocals to which you just know a handful of young guns in the audience will drop their shoulders and begin to sway delightedly, before bursting out a full chorus line of kicks and trace a complex pattern of hardcore semaphore across the dance floor. But the biggest (and best) surprise on the album comes in the middle of ‘John Garseeya Later’ when, falling from a cloudless blue, the smoothest sax part drops as light and sweet as spring sunshine through a young green canopy and the whole tenor of the album seems to change – for a bit. It would be easy to listen to that sighing sax riding high over a fat, dirty groove for a good long while. It’s a lot of fun.

The biggest problem, then, with Skullossus being a ‘sludge’ record, is this record is missing pain. The levity of Gurt’s music robs the groove of its blues, and despite a final note of regret in the pair of closing tracks, ‘The Ballad of Tom Stones and Reg Montagne’ parts One and Two, its shy presence there doesn’t do enough to repay its absence elsewhere.

Many will enjoy it all the same and in a way in which Gurt intended, separate from all manner of genre labelling. But for those looking for the aggressive sorrows so redolent of bands like the aforementioned Weedeater and Dopethrone – for those seeking to hold a mirror up to pain and turn bad luck and dog days into a roaring, rupturing, defiant scream – Skullosus may leave them wanting.