Despite the current metal climate of genre fusion and experimentation, Hexis have managed to carve their own lane. They have consistently put out material in the last six years and toured like crazy around the world in between recordings. In an effort to make splits with dissimilar sounding bands [1], they have worked with the likes of Primitive Man and This Gift is a Curse. As a follow-up to their first full length album Abalam, Hexis has released Tando Ashanti, [2] a dissonant and intense piece of blackened hardcore.

The first track ‘Tando’ sets the stage, a desolate piece of music with slow echoing chords underneath whispered vocals. ‘Ashanti’ bursts in hard but slow, steadily building momentum before it drops the guitars, leaving a heavy bass, hard-hitting drums, and feedback. ‘Calamitas’ picks up the pace, the hardcore element becoming more apparent through the drumming. ‘Nocturnus’ acts as a bridge between the album’s two halves, ending in a refrain of sorts of the cold composition in ‘Tando’. Conversely, ‘Resurrection’ breaks the mold as a drone-esque track with lyricist Filip’s bilious vocals. 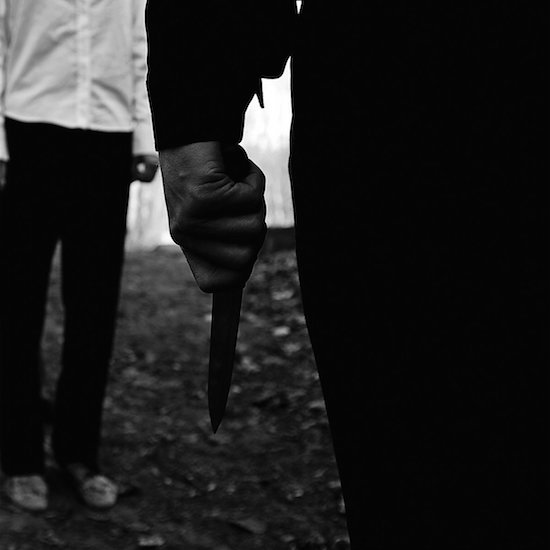 A major defining characteristic of black metal is its use of atmosphere, which is especially true in the trend of long tracks and ethereal soundscapes. However, while ‘Tando’ effectively sets the mood, the rest of the album doesn’t spend too much time on establishing an atmosphere, and certainly not to its detriment. Although the band’s sound takes more inspiration from hardcore punk than black metal [3], their sound would not be as effectively cold and dark as it is without the influence of the latter. The tremolo picking of the guitars is very much a trademark of black metal, which rides on top of the hardcore drumming and bass. [3]

With their first EP XI, the objective seemed to be playing as aggressively as possible with a seamless blend of black metal and hardcore. That appears to still be the case, but since XI they have experimented with their sound, using ambience that accentuates and adds another dimension to the already dark material. Bleak lyrics of nihilism, murder, victims clinging to a cross in a godless world, and anxiety-ridden nightmares, coupled with an icy sound design and coarse vocals, gives the album all the cold and barbaric atmosphere it needs. Although not without its flaws (several songs sound a bit too similar to each other), Tando Ashanti still proves to be an overall solid album, using the best aspects of both black metal and hardcore punk to chilling effect, and post-metal tendencies to experiment and emphasize their already ruthless and abrasive sound.

Footnotes:
1. As referenced in an interview with CvltNation
2. Released through Bloated Veins (cassette), Halo of Flies (vinyl), and Init Records (CD).
3. A different interview on CvltNation