Trending
You are at:Home»Reviews»Metal»Immortal – Molten Earth
By Dan Jackson on April 1, 2017 Metal, Reviews
Band: Immortal
Album: Molten Earth
Record label: Nuclear Blast
Release date: January 22nd 2018
Website & Facebook
Purchase/Download
Tracklisting:
1. Blazehyrkh is Blashyrkh, But The Opposite
2. Burning Mountains of Blazehyrkh
3. The Hand of Doom Ignited
4. Molten, All Too Fucking Molten
5. Crab-Walking Around the Abyssal Bonfire
6. Singeing While We’re Singing
7. Watch An Inconvenient Truth Before Al Gore Spontaneously Combusts
8. The World’s on Fire And We’re All Gonna Die Soon (Is What We’re Getting At)

For a black metal band as legendary as Immortal, introductions typically aren’t necessary. But this isn’t the Immortal of old. Following the departure of long time vocalist Abbath in 2015, the band was bound to undergo some drastic changes. Abbath had served not just as the band’s chief songwriter, but also as it’s public face. Immortal’s new lineup was largely kept a secret, with the exclusion of Apollyon — of Aura Noir and Dødheimsgard fame — returning to his bass duties when Abbath left. Those secrets were revealed at a recent Nuclear Blast press event and listening party for the new album Molten Earth, where it was revealed that Peter Tägtgren had replaced Abbath on guitar and vocals.

Tägtgren is by no means a stranger to black metal as a genre. He was part of a pair of classic melodic black metal albums Hypocrisy recorded under the name The Abyss back in the mid 90s. Then you might consider the dozens of historic black metal albums from Immortal, Marduk and others Tägtgren has produced through his work at Abyss Studios. With all of that in context, Tägtgren seems like an obvious, given his previous relationship with the band, and Horgh in particular, who also drums for Tägtgren in Hypocrisy. None of that explains the shift in lyrical themes and musical direction, however. 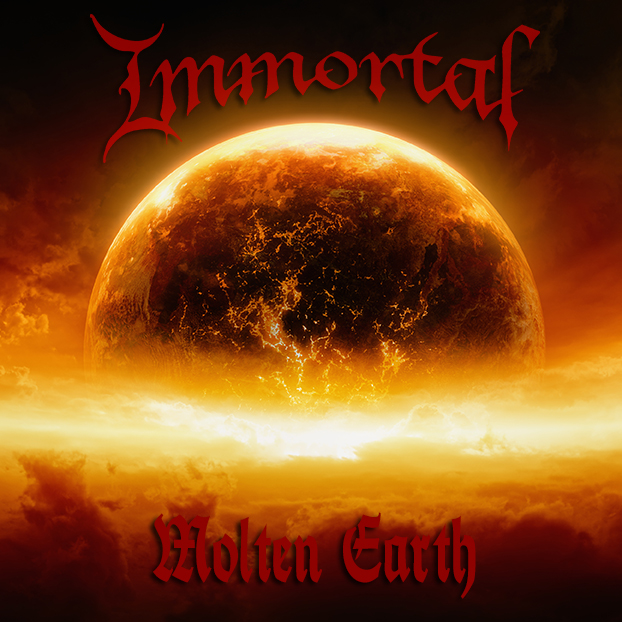 Immortal has, for more than twenty years, been associated with winter, snow, ice, and virtually anything else having to with the cold. All of that changes with Molten Earth. Thematically, the lyrics take a scathing, harrowing view of humanity’s lackadaisical approach to dealing with global warming. In the press materials for the album, Tägtgren addresses the dramatic shift from wintry fantasy to blistering reality: “I do a lot of reading on the subject, and the science is so fucking clear on it, and yet we’ve got these assholes in positions of power condemning the world to becoming a ball of molten shit well before the sun even expands to the point of turning the planet into a black ball of ash. It’s pretty brutal, honestly.” Song titles like ‘Burning Mountains of Blazehyrkh‘ and ‘Blazehyrkh is Blashyrkh, But The Opposite‘. give you just a glimpse into the terrifying narrative the album weaves.

The strangest choice of all is the album’s musical direction. The band has apparently chosen to simply pay the cover song licensing fee for every song on Abbath’s self-titled debut album, re-recording his entire album front to back, with only Tägtgren’s lyrics and vocals choices being noticeably different. Immortal’s rendition of ‘Ashes of the Damned‘, here titled ‘The World’s on Fire And We’re All Gonna Die Soon (Is What We’re Getting At)’ needlessly takes aim at the former singer by replacing the strangely chosen horn section in Abbath’s original song with a choir singing “Fuck! Your! Band!”. It’s childish and out of place with the album’s Global Warming theme to boot. And really, that’s the best way to sum up this album: wasted effort from people that should know better. That the album doesn’t actually exist is just the tip of the, er, iceberg.