Trending
You are at:Home»Interviews»Impavidus: “You can’t just take money and time from people, you have to give something back.”
By Angel on May 27, 2016 Interviews

The Manchester scene has long been an excellent source for metal, from established acts such as Winterfylleth to rising names such as Absolva, Gone Til Winter and Crepitation. Impavidus are another name to keep an eye on; formed from ex-members of My Wooden Pillow and Driven Apart, the band may be less than a year old, but they’ve already racked up some cool tours around the UK, and an EP released in January on Bandcamp.

“The local music scene brought us together,” the band agree. “When My Wooden Pillow went on hiatus in June 2015, Michelle, myself and Chris decided to continue jamming. Chris suggested Gav, who he’d previously worked with in Driven Apart. We’d met Gav socially a few times so we knew we’d get along on a personal level, and just needed to see where the music would take us.”

The resulting style explores the area between melodic death metal and groove, with Michelle showcasing an incredible vocal performance. “We always knew that Michelle had an amazing rock/clean voice but we hadn’t used it in the last band, favouring screaming/growling at the time. This time round, we let the music guide us much more and we were really keen for Michelle to sing clean.” The trade-off between the two is seamless, such as on opener ‘Heavens Gate’, where her rasps echo Jeff Walker’s finest. On the flipside, “the idea of having a strong clean vocal over some really heavy/grooving riffs is exciting to us,” as shown in the heavy tapping section of ‘Exculpate’ which Michelle croons over. Patrick points out that “the mix of clean and growling vocals is nothing new. Burton C Bell of Fear Factory turned heads when he successfully introduced the style on Demanufacture in particular.” 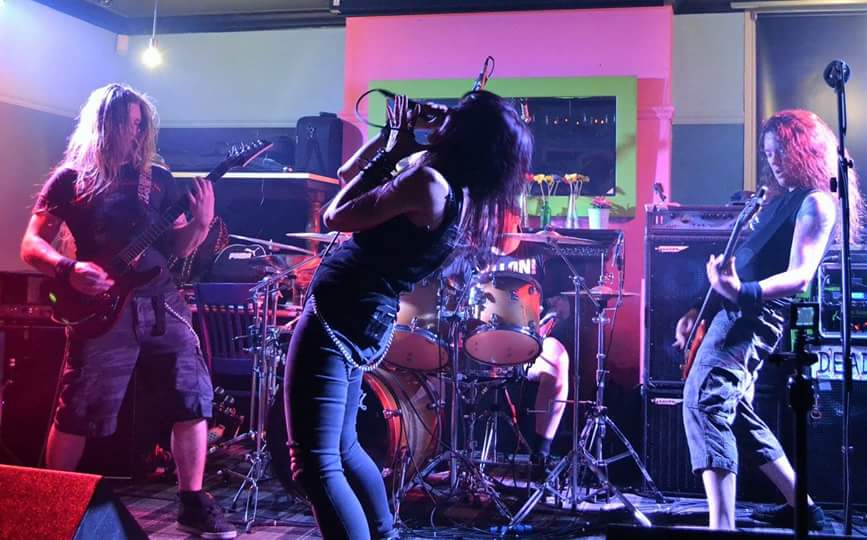 The band keep schtum on specific lyrical topics, with valid reason: “As listeners we love to interpret lyrics in a way that means something to us individually, and we hope that people will be able to do that with our lyrics. It’s much more personal and creates a bond between the listener and the song – even if your interpretation of the lyrics doesn’t match the original idea.” Whatever the topics are, the lyrics are potent and well-inflected, particularly on closing track ‘Scourge’ where Michelle taps into Angela Gossow (ex-Arch Enemy)’s rage as she duets viciously with Patrick McBride.

Turning to the creation process of the EP, the band praise producer Chris Fielding highly: “he’s calm, patient, and knowledgeable and his work ethic encourages the best out of you. At no point did we feel under pressure.” The best moment? The whole process. “Because it’s a residential setup [at Skyhammer Studios]and we were physically detached from our normal lives, we were able to concentrate 100% on the recording.” It’s paid off in the results: an excellent-sounding self-titled EP where the riffs and drums pop out of the speakers, the chunky Lamb Of God-esque grooves meeting the melodeath influences head on. It’s a novel twist on a well-trodden path, and comes highly recommended.

Another area the band have excelled in is social media, a compliment not often given in this day and age owing to how difficult it is to get right. “That credit goes to Chris. It was his idea to post topics which don’t relate directly to the band and it’s working really well. People are engaging with the band because we aren’t begging them to buy our EP or a T-shirt. You can’t just take money and time from people, you have to give something back.”

We asked them for some tips on how to interact on social media as a band:
1. Support and post about local bands – they will return a favour.
2. Offer your fans something, i.e. free download, free T-shirt, free entry to gig.
3. Put out videos giving updates- people are more willing to watch a video more rather than reading War and Peace. So keep your posts short and sweet.
4. Post fun videos, fun pictures, also hints and tips about the music industry
5. Speak to your fans, ask them questions and for their opinions.
6. Make sure you network with as many people as you can. 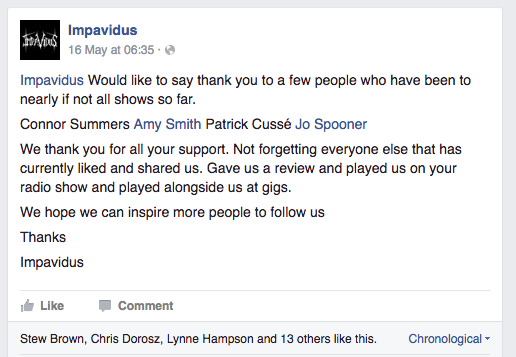 We round out discussing the future plans of the band, of which there are many. “We have a whiteboard full of riffs. Sometimes though, as happened recently, we’ll go into the jam room to work on a song. Someone will play a riff or a drum pattern, and before you know it a whole new song has been written which didn’t exist in our minds or on the whiteboard! Those are the most exciting moments in the jam room.” There are also movements in the live realm coming up as well: “We have some gigs planned up to November so far and hope to book some more for the end of the year. 2017 will see us back at Skyhammer Studios to record our follow-up EP.”

The band’s raison d’être is simple; the one goal they aim to maintain over the next few years is “to still enjoy playing music together. That was the major factor which brought the four of us together and our main drive. This band thrives on the energy between the four members, everyone plays an equal role, has an equal voice…it’s a real collective effort.” That honesty and passion is something which could only come from the underground, and is a mentality which will pay dividends in the long run. “The fact that we look forward to rehearsal, enjoy creating music together and enjoy being in each other’s company is something to be proud of and it should be celebrated. Long may it continue.”

You can check out Impavidus on Facebook, and you can pick up their EP on Bandcamp here. Thanks to the band for their time, and John for the opportunity.