Trending
You are at:Home»Reviews»Metal»Inconcessus Lux Lucis – The Crowning Inquietus
By Stuart Wain on December 20, 2017 Metal, Reviews
Band: Inconcessus Lux Lucis
Album: The Crowning Quietus
Record label: I, Voidhanger
Release Date: 3 November 2017
Facebook
Purchase/Download
Tracklisting:
1. With Leaden Hooks and Chains
2. Armour Rides Upon Midnight
3. At the Behest of the Sinister Impulse
4. To Satiate Silence
5. The Crowning Quietus
6. Fever Upon the Firmament

For better or worse, black metal is often defined by its darkness. Not just in terms of the obvious aesthetic trappings of the genre – the monochrome artwork, the corpse paint, the fascination with death and evil. The very best black metal is, almost without exception, defined by a darkness that is best explained in terms of the Other – whether that Other be defined in terms of Satan and pagan rituals; of Lovecraftian horrors and the crushing weight of cosmic insignificance; or of one’s connection, almost spiritually, with nature. Those are the albums that stay with you, that make a record something more than just something to listen to, and that make black metal a genre that means so much to so many in the underground.

Yet sometimes, an album can confound your expectations. On the face of it, The Crowning Quietus, the second album from Mancunian duo Inconcessus Lux Lucis, is typical black metal to the core – monochrome artwork, corpse painted promo shots and all, even if they do describe themselves as playing “Saturnian Black Magick”. And sure enough, the album starts off in the way it might be an expected; introductory track ‘With Leaden Hooks and Chains’ sets a suitably Satanic atmosphere, and first track proper ‘Armour Rides Upon Midnight’ conjures the kind of sound and feel that Watain‘s last two records so clearly aimed for, albeit with much more successful results than what their bigger-name contemporaries achieved. So far – based upon the presentation of the band and previous records – so expected, though with admittedly great results, and a marked improvement over past releases. This is especially evident in terms of production, which gives the band an extra strength and makes the harsh, commanding vocals especially powerful. 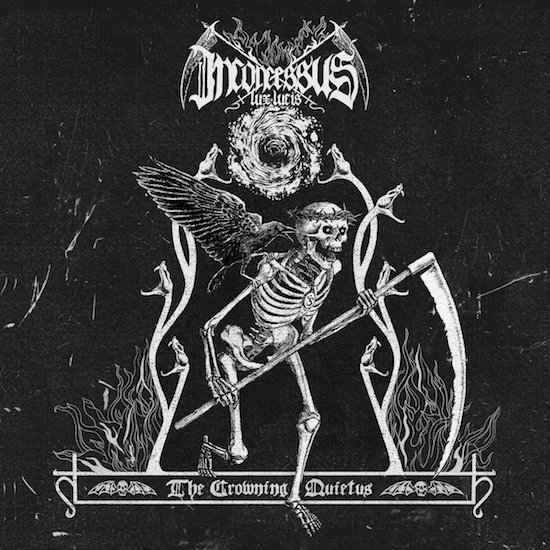 But as The Crowning Quietus goes on, the album begins to change. There is no singular moment of metamorphosis where one can point and go “there! That is where the skin is shed and the beast reveals its true form!” Third track ‘At the Behest of the Sinister Impulse’ may have the kind of off-kilter, frantic black-thrash feel typically associated with Absu, but there’s also plenty of that Watain-esque darkness and Satanism to the track, but it’s clear that something is happening, and that Inconcessus Lux Lucis have aspirations higher than being just another black metal band.

The section that makes this clearest is during the final two minutes of the song, as it slips in to true heavy metal territory. Iron Maiden galloping rhythms; guitar heroics; and even a King Diamond wail emerge, and the remarkable thing isn’t just that a band would combine the blackness of orthodox black metal with 80’s heavy metal. What is truly notable is that Inconcesses Lux Lucis do so in a way that makes the two styles seem like natural bed-fellows, and that it is done with no great fanfare, just a simple switching of styles that is as impressive as it is seamless. Following track ‘To Satiate Silence’ only ups the ante; a hyper-speed, eight minute virtuoso display of black-thrash (both in terms of song-writing and musicianship), it is a rush of adrenaline that is simultaneously incredibly enjoyable, yet rooted in Satanic darkness.

As impressive as preceding tracks are though, the final two tracks are where The Crowning Quietus proves itself to be a work of absolute mastery. The subtle shift towards more heavy metal techniques and references becomes more pronounced, especially in the guitars which begin to pull of the kind of small turns and melodies associated with classic metal, mixed in with traditionally black metal sinister tremolo-picked melodies. The combination of styles – one designed to thrill and excite, one centred around hate and misanthropy – is done with such confidence and skill, that it’s hard not to be utterly swept along with the energy it creates. The solos on these final two tracks are where that heavy metal feel is most prevalent; the closing minutes of the title track are pure 80’s guitar heroism, all soaring leads and head-spinning melodies; whilst the later half of ‘Fever Upon the Firmament’ almost completely abandons black metal for a stirring, jaw-dropping display that wouldn’t be out of place on the first two Iron Maiden albums. A segment this exciting, this god-damn enjoyable has absolutely no business being placed on a black metal album that, for its first half, feels so traditional in intent and aesthetic. And yet it absolutely belongs here, and is the perfect way to see out an album that demonstrates a character all of its own, and by its end has moved so far beyond what was expected that it’s hard not to be amazed.

There’s so much going on during The Crowning Quietus that repeat listens are practically mandatory. For sure, it’s enjoyable and impressive enough initially; but spend time with it, and the album reveals a band who are not afraid to subtly toy with the listener, to foreshadow the coming twists and turns in understated ways, showing both intelligence and bravery. Black metal that aims to be enjoyable may not be a novel proposition – see the likes of Abigail or Midnight for evidence of this, or even practically any proto-black band you care to name, such as Venom or Sodom – yet they are almost always delivered with a knowing wink and a nod, something obvious that makes it clear they’re not wholly serious. And whilst previous releases hinted at the direction of The Crowning Quietus, especially previous EP Crux Lupus Corona, there was little hint that the album would be such a success, or so subtle in the way it changes directions. It’s this, and the seriousness with which it is presented, that makes the album so vital, and noteworthy in terms of the Zeitgeist of black metal – a record that can only be described as “trve” [1], with a sense of absolute enjoyment. It’s also one of the best black metal records to have been released this year, and there’s everything here to suggest that it could one day be considered an underground classic.

Footnotes:
[1] As much as I despise this word in this usage, and generally only use it to affectionately, gently mock the self-seriousness of much black metal, as a short-hand descriptor of black metal that considers itself to be bigger, and more important, than just music, and feeds into wider intellectual or spiritual implications, I can think of no better term.