Media coverage [1] has painted the Colombian duo, Inquisition, in a bad light, politically speaking; the net result is one of discomfort among listeners within and without the black metal fold. Historically, this is nothing to be surprised by – one of the founding fathers of the second wave of Norwegian black metal, Burzum’s Varg Vikernes, is erroneously vilified (deservedly or not) to this day as exhibiting National Socialist tendencies, thereby splitting an already polarised subculture even further. My reaction to these outpourings of offended sensibilities is usually one of annoyance:  after all, to quote Cesar Cruz, “art should disturb the comfortable and comfort the disturbed” [2] and Bloodshed Across the Empyrean Altar Beyond the Celestial Zenith, the latest record from Inquisition, is undeniably a work of art. Writers wiser than I [3] have discussed this phenomenon of outrage in more detail than I will enter into here, but the bottom line is a simple one: if you dismiss the creative output of an artist purely because you disagree with their stance (political, thematic or otherwise), you could well be missing out. Especially when said output is as much fun as this record is.

Bloodshed Across the Empyrean Altar Beyond the Celestial Zenith is exactly what any long-term Inquisition listener would expect: riff-based compositions, a strong thrash metal influence, drum-driven shifts in tempo that keep a listener on edge and an unmistakable rasping, retching vocal style (the relative monotony of which is possibly the only low point of this album). This ‘metal 101’ approach to composition, coupled with the groove that the pace shifts impart, give an immediate comparison that’s hard to shake, but not necessarily negative – on Bloodshed Across the Empyrean… Inquisition can easily be mistaken for a harder, heavier Immortal. Drop some technicality in favour of turning the ferocity up a notch closer to Swedish standard (à la Marduk) and you’re on the right track. Vocalist/guitarist Dagon may do less with his vocal style than Abbath, but the result is similar: grim, unsettling, but catchy as hell. And even if the harsher guitar work, being less rich in reverb-drenched treble tones, may lessen the icy atmospheric impact Inquisition are no less immersive. Put another way: the Sons of Northern Darkness may channel the icy bleakness of Blashyrkh, but Inquisition evoke the scorched wastelands of Hades itself.

One way metal (specifically black metal) can be constantly surprising is in the poetic content of their work – and I’m not just referring to wordy album and song titles [4].  Yes, Inquisition’s themes are fairly standard theistic Satanism fare, but the lyrical approach is almost hymnal: their paeans to the lord of the underworld are surprisingly soft in terms of vocabulary – an approach recently echoed in the output of the likes of Dark Funeral and Gorgoroth. The central theme of ‘Vortex from the Celestial Flying Throne of Storms’ is a great example:

“Element of earth, fire and wind
Raise from the ashes of the dying son
Rivers of blood flowing from skies
Cult of the stars where the third eye shines”

Inquisition – ‘Vortex from the Celestial Flying Throne of Storms‘

If it weren’t for Dagon’s demonic delivery of these lines, they could be lifted straight from an early 70s psychedelic stage musical dealing more with gnosis than with apocalyptic visions. One interesting sidebar is the lack of profanity that more mainstream acts tend to fall back on to better scatter their message of dissatisfaction across a wider (read: less literate) target audience.

Musically speaking, Inquisition shine where riffs are concerned: the slow, building intro to ‘A Black Aeon Shall Cleanse’ is hypnotic, making the sudden shift in pace so much more powerful;  the midway bridge section on the title track that elevates with its clean melody before dragging you right back through the brimstone… Even the big, open chords in the outro of ‘Power from the Centre of the Cosmic Black Spiral’ are a breath of fresh air within the clouds of burning sulphur. Add in Incubus’ tight, solid drums and you have a winning black metal recipe [5]. He may not be as showy as some drummers, but what he lacks in flair he more than makes up for in sensitivity. Even on tracks like ‘A Magnificent Crypt of Stars’, which waste no time in getting brutal, his drumming is more than just percussion; it’s a counterpoint to the main text that adds to the drama with careful expression and unexpected changes in attack. 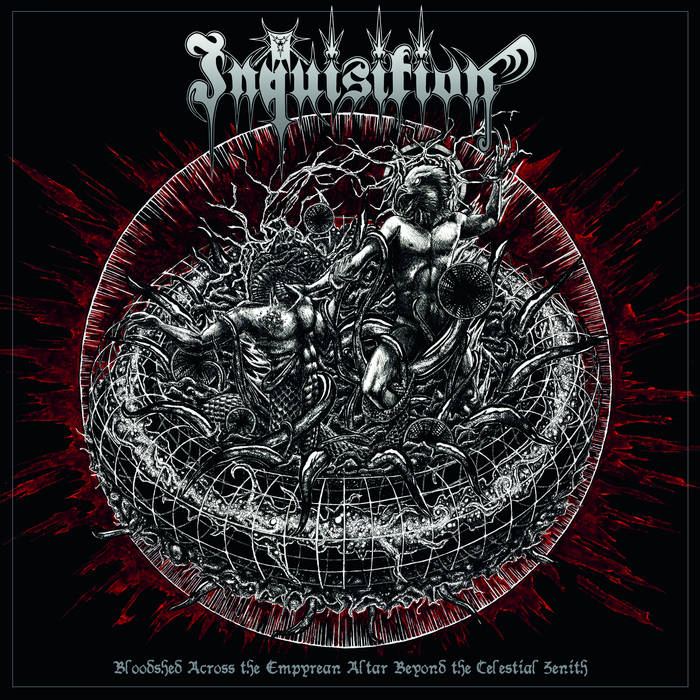 The opening and closing tracks (‘The Force Before Darkness’ and ‘The Invocation of the Absolute, the All, the Satan’) are completely incongruous, but the mood they generate with their sampled soundbites that range from Aleister Crowley to bleating goats is one hundred percent appropriate – if a trifle unsettling, if the written history of some of his ritual practices [6] can be believed. The same holds true for the ‘post-conclusion-epilogue’, ‘Hymn to the Cosmic Zenith’, which translates in my mind as the soundtrack to an as-yet unrealised film exploring every human perversion perpetrated in the name of Lucifer.

Honestly, I can find very little wrong with Bloodshed Across the Empyrean Altar Beyond the Celestial Zenith. From the very first listen, I’ve been hooked: it’s far further along the extreme metal end of the spectrum than I usually enjoy, but it carries its own unique atmosphere. Its rock ‘n’ roll sensibility makes it catchy, too, with hooks a-plenty. Not since Satyricon’s The Age of Nero have I had as many spontaneous fist-in-the-air moments while listening to a black metal album. Factor in the controversy the band themselves have attracted (deservedly or not) and the result is exactly what I find myself looking for in contemporary black metal – a combination of misanthropic music, theatrical imagery and provocation that definitely “disturbs the comfortable” and, by extension, comforts me.