Trending
You are at:Home»Interviews»Trey Williams (Dying Fetus): “The world is more fucked than any tale of fiction.”
By Michael Pementel on July 13, 2017 Interviews

Death metal is amongst one of the most extreme art forms of our time. For years we’ve come to thrash and mosh to the blast beats, searing guitar riffs, and guttural vocals the genre is known for. The scene’s history is full of brutal bands that have contributed great works, building a quality reputation for heavy and punishing material. As one of the genre’s leading acts, Dying Fetus continue to unleash some of the most violent sounding work in the world of metal.

“This is our life,” drummer Trey Williams shares. “We are death metal heads and love this [the music], that’s our driving factor.” His passion for death metal continues to fuel the band’s utter rage, bursting through the metallic clashing and grinding blast beats he is known for. Dying Fetus are a band of multiple styles and sounds. “Our approach is different,” Williams says when discussing how the band composes. “We use all our influences, including: grind, death, and hardcore, and use all the best parts of them.” All these styles bleed through the band’s work, annihilating listener’s eardrums for the past 20 years. 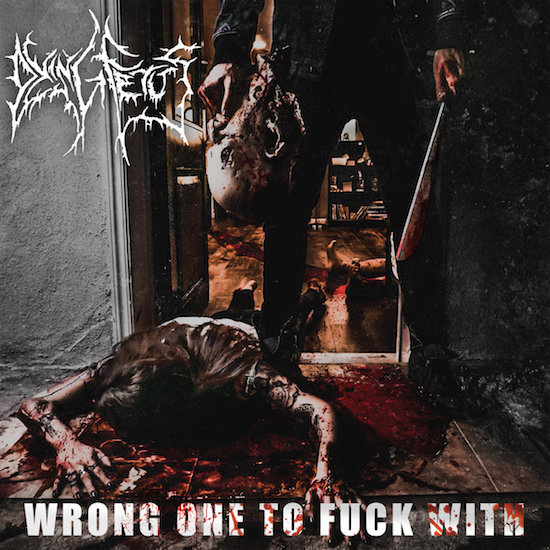 As of this June, Dying Fetus released their eighth studio album, Wrong One To Fuck With. “We cover drug addiction, the end of the world, and revenge,” Williams says when sharing some of the themes in Wrong One…. With the record only out for almost a month now, the reception has been overly positive. The album marks the band’s biggest chart debut so far into their career, and is perhaps their heaviest work as well. Along with their skin blistering instrumentation, Dying Fetus’ lyricism has always been an essential component to their grizzly atmosphere. The violence that comes through the music has always been grounded in reality, always pulsating with gore and anger. You won’t find Williams and the guys writing about demons with horns, but monsters of the flesh. “The world is more fucked than any tale of fiction, and we want compelling subjects and content with brutally honest lyrics,” Williams says. On the instrumental side of things, he shares his appreciation for his contributions. “I’m most proud of my increased involvement, such as in the preproduction,” he states.

From the moment Wrong One… begins, it never stops in grinding out the savagery. Take the track ‘Seething With Disdain’ for example, opening on low metallic riffs that rev like a buzz saw. The drum work pumping away with adrenaline, the vocals raging on. The grinding blasts away as the song’s anger rises. If that isn’t enough to get the death metal heart racing, then maybe the band’s heavily controversial music video for ‘Die With Integrity’ will get the blood pumping (and some stomachs turning). With each new release, Dying Fetus continue to push the envelope of extreme metal. Wrong One is a proud achievement for Williams. Along with Wrong One…, he also shares the record most important to him in the Dying Fetus discography. “Killing On Adrenaline was the big one for me.  It was an album that started the ball rolling fast.”

Dying Fetus have been instrumental to the progression of death metal, helping to build the quality of the genre, while also being inspired by the bands that have come out today. “The genre as a whole has developed more proficient musicians,” Williams states. “The abilities the new generation has are amazing, and that has helped push ourselves.” 20 years is a long time to continuously produce death metal of such a brutal caliber. For Williams, the passion and reaction of the fans is worth every moment of it. The death metal community has become a home for him to connect with fans who unify over a shared love. “The community as a whole is more friendly than most. Once you find a click you like, most of them stick by you.”

After 20 years of brutal and slamming death metal, Dying Fetus have proven themselves to be one of the most significant bands of the genre’s legacy. “We will play music for as long as we have the listener’s ear,” Williams says. The band is preparing to co-headline this year’s Summer Slaughter Tour, and stir mosh pits into a hysteric rage. Death metal has commitment that is unique compared to other forms of music; being a form of art primarily within the underground, the genre is home to some of the most loyal fans and musicians around. It is a loyalty and passion that Williams shares as he grinds away with fury and rage in each record. That love could push Dying Fetus to write eight more records and shred away for another 20 years. One thing is for sure with them though… Dying Fetus is a band that will forever be remembered as contributing some of the most brutal and sinister music ever made in the world of metal.

Thanks to Trey Williams for his time. You can follow Dying Fetus on Facebook here. Their new album Wrong One To Fuck With is on Bandcamp here, or via Relapse Records. You can catch the band on tour as part of the Summer Slaughter package in the US.