The second album is often the most vital step of a musical career. While there are many débuts which can be considered as ‘classics’, the majority are sandboxes in which bands can experiment while searching for their calling. The second album, then, is a natural progression which sees the band more comfortable in their skin, having learned lessons from the first time round. In the case of Karybdis, a UK band fusing Gothenburg-style melodeath and chug-tinged groove metal, Samsara is a firm step up from From The Depths. While on paper the genre blend sounds cookie cutter, they have moved away from the influences that formed their début, and branched into new territory.

In a rare case of the first single being a good representation of the new style, rather than ‘playing it safe’, ‘Constellations’ starts out with familiar melodeath before whipping through Dissection-esque tremolo and a brief jazzy interlude – and of course some Lamb Of God-loving muscular chug – before rounding out on a grandiose note with orchestral strings swirling around the rumbling drums. This finale acts as an early highlight of the record, and will be a potent live moment. 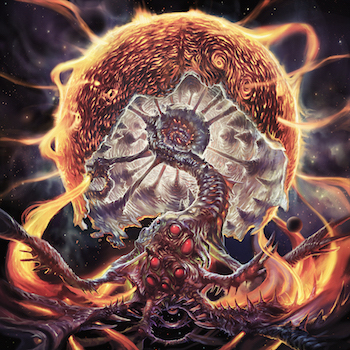 Where Karybdis have always had strength is in their tight songwriting, and Samsara only reinforces this. From the melancholic yet catchy opener ‘Rorschach’ to the full-throttle title track, Karybdis are exploring their influences in fresh new light, and nowhere is this clearer than on ‘Summon the Tides’. What is initially assumed to be a solemn classical interlude then introduces drums, and a symphonic death metal aura. The classical elements crop up on other tracks as well, and provide one of the many excellent facets to their sound.

Vocalist Rich O’Donnell has always been a dominating factor for Karybdis’ presence both on record and onstage – those who have witnessed him live knows his boundless energy – but Samsara sees him dial back a touch. He still puts in a stellar varied performance of growls and shrieks, but what is also key is where he lets the music breathe, so new guitarist Matt Lowry can trade off with Pierre Dujardin. The melodies and solos on this record are first-rate, from the blackened ‘Mermaids’ to the dirty death metal groove of ‘Avarice’, there’s barely a bad track on here.

A couple of minor weak points hold this record back; the mix occasionally renders the drum sound a little wet (especially the snare), but otherwise Audiohammer blends the diverse metallic and orchestral elements smoothly. Track-wise, ‘Monster’ is solid but brings little to the table aside from a fun groove, and closer ‘Absence’ lacks the same potency that saw From The Depths end on the majestic ‘Deathtoll’. It has incredible drum grooves – and in fact Mitch McGugan’s work is top-notch across the board – but lacks the finality of the début’s respective ending track.

Broadly speaking, though, Samsara is an extremely strong record and thoroughly enjoyable listen. The new wave of melodic death metal – infused with groove and vigor – has a leading light to look to in Karybdis. This band will go far with this current trajectory.