Trending
You are at:Home»Reports»Live Preview: Damnation 2016
By Richard Lowe on October 31, 2016 Reports

Sweden’s Cult of Luna are one of the pioneers of the post-metal genre, utilizing doom metal and shoegaze into their progressive sound. This show, however, is special – the band will be performing Mariner – featuring the vocal prowess of Julie Christmas (Made Out of Babies/A Battle of Mice) – in its entirety. Already album of the year for many (and with a glowing review from Jim Parry-Smith), the room will be packed for this rare occasion – possibly one of the only outings of this album ever.

Having begun his reign over the icy kingdom of Blashrykh 25 years ago as frontman of the ever piss-taking Immortal, Abbath is set to grace the vaunted headliner slot this November. Following his departure from Immortal last year, Abbath Doom Occulta has formed his inventively named solo project Abbath, whom he will be leading to the headlining slot at this years festival – expect earth shattering riffs, frost bitten grimness and plenty of trademark crab dancing, and (hopefully) some Immortal cuts. Another veteran proposition, Enslaved are to co-habit the headlining slot with Abbath. Nigh on 25 years into their career – having begun as Norway’s premiere no-right-wing-strings-attached Viking Metal act – Enslaved will be rewarding any and all festival-goers with a 25th anniversary set as part of their ‘Spinning Wheel’ tour, which focuses on the band’s latter output.

Accompanying the Scandinavian frost are a host of British talent old and new, with the likes of Akercocke and Electric Wizard ensuring that Britain’s expert contributions to the field of metal are left in no doubt. Electric Wizard need no introduction; the band are to round off their 23rd year with a headlining performance at this year’s Damnation – at a time when sludge and doom are seeing a renaissance, they will be leading their very own fuzzed out black mass at this year’s edition, affirming their status as the kings of smoked out UK riffage. The recently reformed Akercocke make a return to this year’s Damnation festival for their first performance at the festival since their breakup four years prior. In the wake of their sudden departure from the Bloodstock lineup, this may be the prime time to catch the band’s blackened, occultic brand of death metal in a festival setting. Meanwhile, quietly returning to the live circuit in the wake of a mysterious but thankfully brief hiatus, metallic hardcore titans Nails are also to grace the bill. Following a busy year in the wake of the release of You Will Never Be One Of Us, Nails’ furious audial death machine will doubtless be tightly honed for lover of barbed, blasting violence – expect moshpits, circle pits and (hopefully) minimal crowd killing.

The Infernal Sea are also set to bring their early-modern period theatrics to Damnation’s stage this year. Having been everywhere (including this show with Anaal Nathrakh we reviewed) in the wake of the conceptual mastery of The Great Mortality – the soon-to-be UK black metal heroes will be at their peak after a hard year’s touring. On the flipside, in the vein of blackened, crawling riffage are 2016’s post-sludge breakout act Conjurer. Fresh from the runaway success of the crushing I earlier this year, the Sheffield lads are set to bring their engrossing fusion of old and new styles to the stage this year – and if the hype behind their tightly honed live sets this summer is anything to go by, they will be leaving Damnation with a host of new fans. On the softer side of the riff-laden spectrum, Bossk follow up the shimmering soundscapes of this year’s Audio Noir with their appearance, bringing their innovative dreamscape fusion to Leeds.

With such a varied selection of noise old and new there’s something for everyone at this year’s Damnation. Things kick off at 1pm Saturday 5th November, be there. 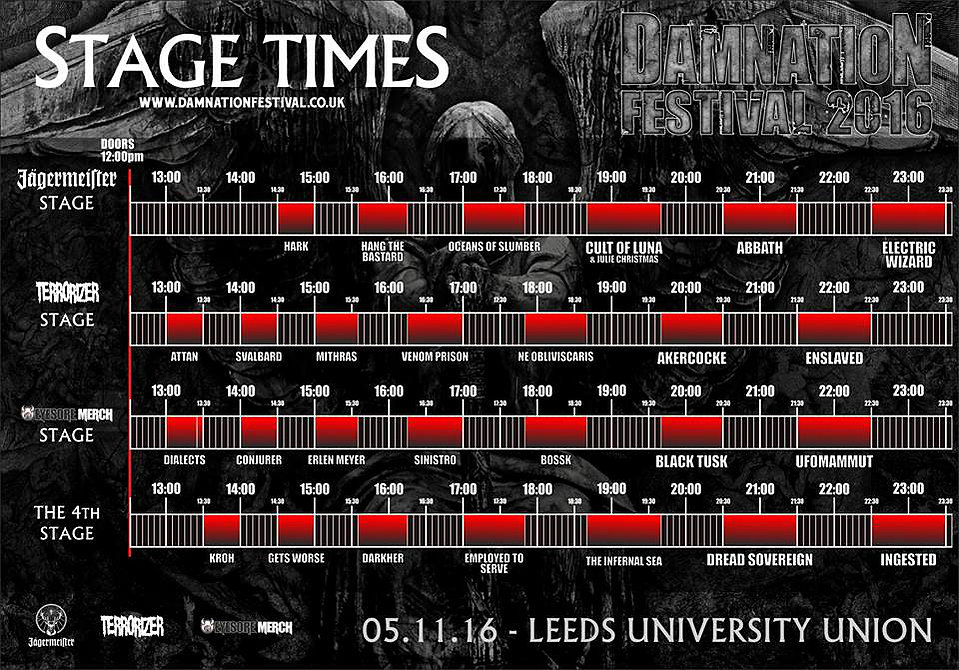