Rock Altitude is an eclectic four-day festival held in the Jura mountains of Switzerland, now into its twelfth year. It prides itself on providing a musically varied line-up (from punk to post-rock to indie to electronica) and on championing local bands as well as big names. The festival organisers know what they are doing and put all the metal bands on Friday, ensuring a loyal turn-out of metalheads who braved the terrible weather along with locals and campers, adding up to several thousand spectators over two arenas. Even within the genre of metal there was an eclectic mix on Friday, a clever balance to please metalheads of most persuasions. Headlined by Finland’s Children of Bodom, Friday also featured Wolves in the Throne Room (US) and Underside (Nepal), with the other five bands – all Swiss, two of whom are making huge waves on the international scene. 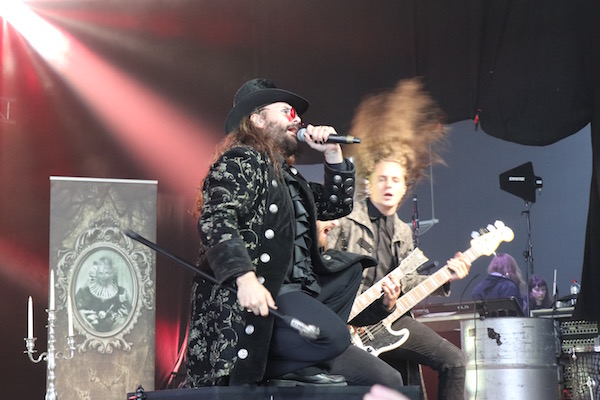 Local band Silver Dust had the difficult task of opening the main stage with an arena still only a quarter full, but they had an endearing charisma and played like headliners. Silver Dust have only been around since 2013 but they are hugely ambitious, having already supported Lordi and Battle Beast on European tours, and with a second album Age of Decadence just released. I found their unique brand of ‘baroque-punk’, or as they call it ‘Tim Burton-ian metal’ surprisingly entertaining. Their performance is a circus show; it’s all about the elaborate steampunk costumes and makeup, with a succession of ladies appearing on stage to act out the songs alongside the musicians. An expensive-looking ‘magic mirror’ screen provides visual effects throughout. The ludicrousness works because Silver Dust are genuinely good musicians; drummer Mr Killjoy performs a remarkable drum solo, and frontman Lord Campbell plays an impressive duet of a Bach Toccata & Fugue with an organist in the magic mirror. Silver Dust’s concept rock has some unexpected thrashy and industrial sounds behind the anthems, and with their charm and ambition they are worth keeping an eye on.

Another act also from nearby town La Chaux-de-Fonds, Papertank, are a punk band with a difference: no guitar. Superstars Royal Bood have shown that bands can hit the big time with a rhythm section only, and Papertank bassist Anthony demonstrated the true versatility of the bass guitar. There was certainly nothing missing from their sound, and although punk is not really my thing, they were hugely popular with the local crowd. 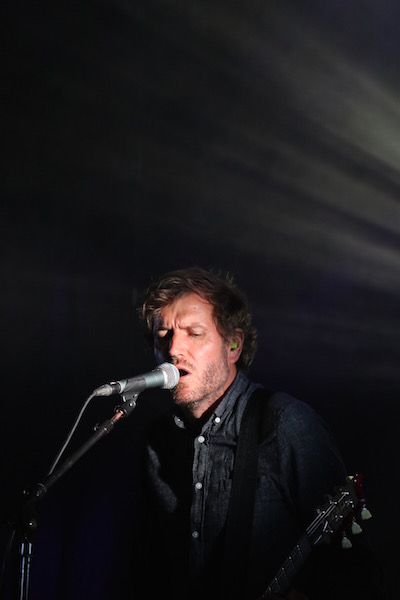 Although they were billed by the festival as ‘the most important Swiss band of the last twenty years’, I confess that I had not heard of Impure Wilhelmina before this festival. Swiss metal is thriving within the country, but struggles to break out internationally, and Geneva’s Michael Schindl (the vocalist/lead guitarist/driving force of the band) deserves to have had more commercial success. Having said that, he has been producing music steadily for twenty years, surviving multiple line-up changes with seven full albums under his belt, and there was a palpable sense of reverence for his achievements amongst the other Swiss musicians backstage. Impure Wilhelmina play an intense blend of rock/metal that tugs on the heartstrings in a deeply unsettling way. Layers upon layers of sound build up to a catharsis of emotion, and I found myself inexplicably tearful at certain moments, the 45-minute set seeming to pass by in a flash. 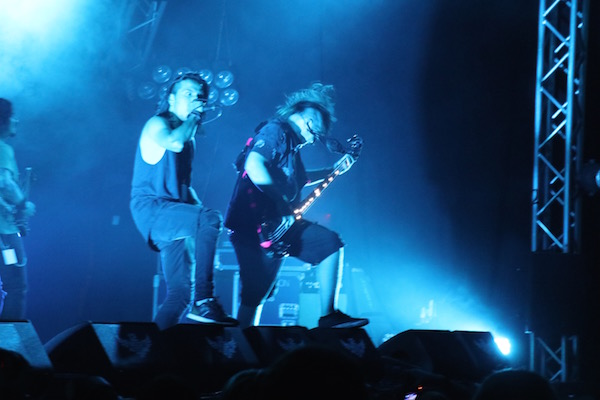 Underside were replacements for Walls of Jericho, who pulled out at the last minute leaving a gap in the programme. Hailing from Nepal, Underside are not as big a name as Walls of Jericho, but they do have a number of Swiss connections, having played benefit gigs for Nepal here in the past, and borrowing Enigmatik’s drummer Guido Wyss since their own drummer had visa issues. Again knowing nothing about them before the festival, I was blown away by their aggression and tight playing. Underside are a metalcore band with old-school thrash elements, and they are decidedly political, oppression being a major lyrical theme. Vocalist Avishek KC is very keen on audience participation, and managed to get a wall of death and a circle pit going despite initial lack of enthusiasm from the crowd. Underside are releasing their second album this week and I will definitely be checking it out. 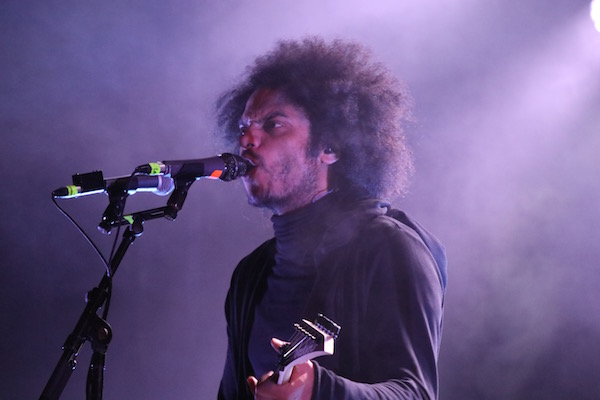 The first big name of the night, Zeal & Ardor, is also Swiss, but has made an indelible mark on the international stage. Manuel Gagneux’s experimental concept album, Devil is Fine, took the metal world by storm last year, mixing slave spirituals with black metal to unique and brilliant effect. Since then a one-man band has evolved rapidly into a full band with a busy string of tour dates. This was the second time I’ve seen them and their performance has lost none of its ominous power. In between songs Manuel is shy and retiring, but he comes alive with the music, invoking multiple demonic personalities and displaying an impressive vocal range. ‘Don’t You Dare’ is genuinely terrifying to watch. The album is less than 30 minutes long, so Zeal & Ardor have added several new tracks to the live show (including ‘Servants’, ‘We Never Fall’ and ‘Ship on Fire’) which are in keeping with the rest of the album. Lyrical themes of childhood, sacrifice and satanic rituals are still there, with a feel of the deep South. Musically the new tracks are still black metal, but with hints of blues and slightly softer rock, showing that while there is still scope for Manuel to explore this new genre he has created, he may move in other directions too. Title track ‘Devil Is Fine’ has become something of a black metal anthem, and provided the perfect sing-along encore. 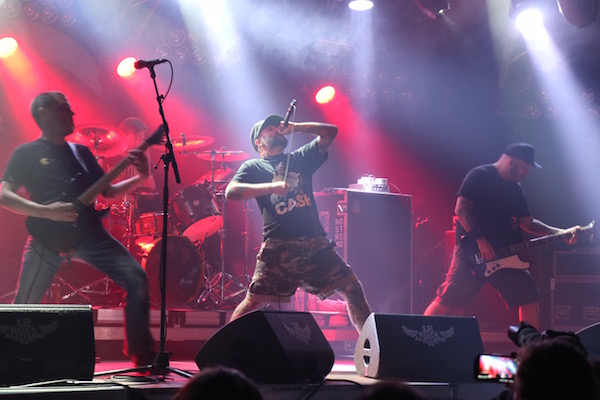 Nostromo were up next in the second tent, playing their last festival of the summer before they hit the studio to record new material. Geneva’s Nostromo have had an extraordinary year, after a twelve-year hiatus reappearing from nowhere on Europe’s biggest festival stages. Nostromo’s sound is best described as grindcore/hardcore, and while it is impossibly heavy – often sounding more like a series of explosions than a piece of music – it is full of colour and expression. The exhilaration of Nostromo’s live performance comes from the precision playing; it’s hard to believe that less than a year ago they hadn’t played together for twelve years, as recalled in our interview. Vocalist Javier commanded the stage, expressing huge gratitude for Nostromo’s new opportunity to return to the scene, as well as plenty of humour. He introduced ‘Sunset Motel’ as “une ballade… pour les filles” (hint: it’s not a ballad). Nostromo added one new track, ‘Uraeus’, to their set, and have promised new songs for their tour this autumn. 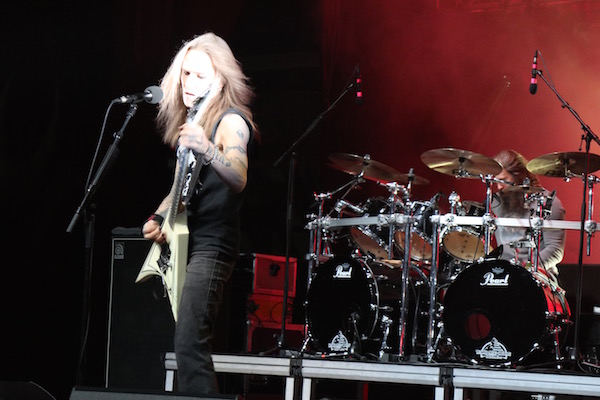 To the headline act: Finnish melodeath legends Children of Bodom, who are this year celebrating twenty years in the business with their ’20 Years Down and Dirty’ tour, in which they are playing only material from their first four albums. It was business as usual for Children of Bodom tonight, and that means virtuosity, frantic speed, and absurd amounts of swearing from frontman Alexi. The band and their fans enjoyed a nostalgia trip with some deep cuts from early in their career, including some tracks (eg. ‘Red Light In My Eyes Part 2’) which they hadn’t performed live for a long time before this year. Despite twenty years on the road, side projects and rumours of severe back problems for drummer Jaska, the group certainly appear from the outside to be as committed as ever. Musically they are at the top of their game right now; there has always been great chemistry between Alexi and keyboardist Janne (who broke into a random rendition of Eighties classic ‘Axel F’ at one point), but he and new guitarist Daniel Freyberg have also developed a great onstage rapport, performing some spectacular solos in harmonised thirds. A flawless performance, with stand-out track ‘Every Time I Die’. But as a huge fan I’m hoping that this year of performing old material has inspired them for a new album and the start of the next twenty years of Children of Bodom. 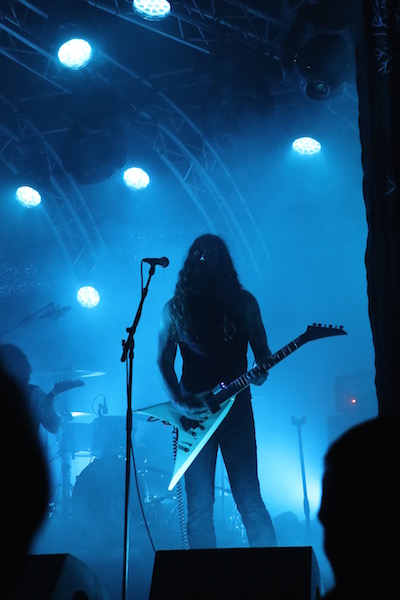 Wolves in the Throne Room are a US black metal band renowned for their atmospheric, nature-inspired epics. With a 1.15am start-time, I must admit I was flagging a bit by this stage, and the sonic immersion provided was an effective musical come-down after the frantic energy of Children of Bodom. On a dark blue-lit stage, almost completely shrouded in smoke, Wolves in the Throne Room very slowly built walls of guitar sound; brutal riffs backed by keyboard effects and shrieked vocals that seemed to come from far away. An interesting and surprisingly relaxing way to close the festival.

Rock Altitude is a pain in the backside to get to but I’m so glad I made the trip to that mountain. A small but perfectly-formed festival, with metal day striking an excellent balance that reflects current trends in metal while championing Swiss bands and bringing in a crowd-pleasing headliner. The “motherfuckin’ cold and rainy-ass weather” (as Alexi Laiho put it) may have harmed camping revenue and ticket sales on the night but certainly didn’t dampen spirits in the packed arenas. I’ll be back next year. 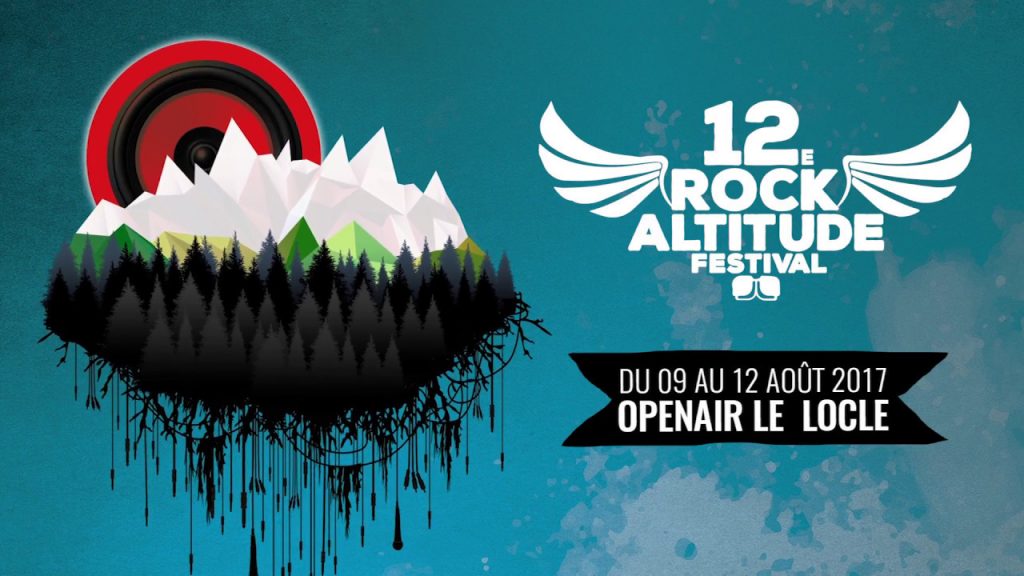