To be asked to participate in Festival du Chant du Gros – or its smaller brother Le P’tit du Gros – in Le Noirmont, Switzerland, is a great privilege for many Swiss bands and artists. The festival has been running for 26 years now, and is now a prodigious event on par with the Montreux Jazz Festival; up to 50,000 music fans trample the field over the weekend. For Silver Dust to be asked to perform at the festival was an immense honour for the up-and-coming Swiss metal band – though front-man Lord Campbell and bassist Kurghan are no strangers to the event, having previously played at the festival with their other musical projects.

So, for my tenth Silver Dust concert – and to celebrate this momentous occasion in their short history – I went along for the ride to see how well they could rock this impressive festival. Silver Dust were billed to play on the second Scène Déménage (‘Domestic Stage’ in English), with plenty of space for them to act out their flamboyant theatrics.

As the lights dimmed and the introduction clip played on the Magic Mirror, cheers began to ring out from the established fans in the half-full marquee – they knew what was coming. Silver Dust thundered onto the stage at 20h30, with their familiar opening track ‘Welcome’ – its explosive notes and Lord Campbell’s death metal growls making the tent reverberate – announcing that the steam-punk phenomenon had arrived. Because of their one-hour time slot, their set list differed a little to what I am used to; focusing more on second album Age of Decadence (which was released Europe-wide this year) with the big hitters like ‘Heaven Knows’, title track ‘Age of Decadence’ and ‘My Heart is My Saviour’ making an expected appearance. Only ‘So Let Me Now’ from 2013’s Lost in Time made it into this set – Silver Dust perhaps focussing on their latest, more concise release for promotional purposes and to win over new fans. 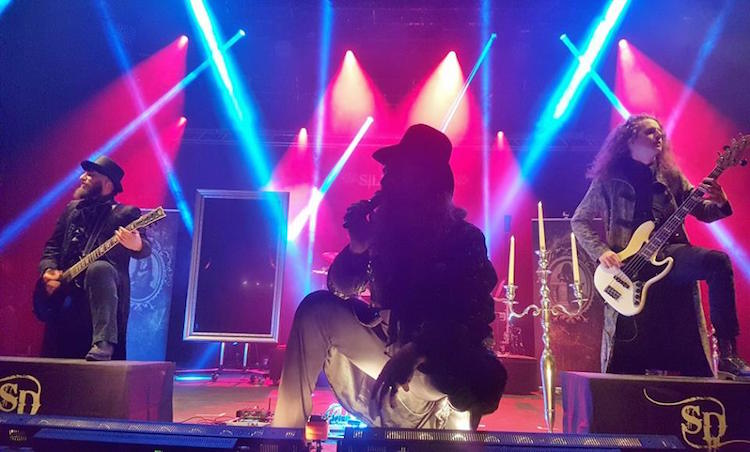 To celebrate Silver Dust’s participation in Chant du Gros, we were gifted with the full spectacle of the stage show featuring ‘Morte D’Aimer’ with Mèlissa, Georges and the Black Priestess – who destroys their holy union and turns Mèlissa into the sinister Dame Blanche. However, that was not our only treat – the giant marquee was now bulging at the seams with around 5000 people all there to watch the spectacle unfold – as we were also rewarded with the emotional ballad of ‘Forgive Me’, soprano Carlyn Monnin taking to the stage to fulfil her guest cameo once again. I had last seen her on stage in January at Tavannes, and still she takes my breath away with her and Lord Campbell’s haunting duet.

Such was the emotion that the band felt at seeing so many music fans enjoying their set, and the majority of the vast audience crouching down at Silver Dust’s request for ‘Age of Decadence’, that it moved Lord Campbell to tears. A very poignant moment captured by their photographer Stèphane, and another reason why this band deserve all they are rewarded with, after they have worked so hard to get this far so quickly.

Evergreen crowd-pleaser ‘The Judgement Day’ was the final track in this glorious cabaret, the band still bursting with energy and playing out their percussion finale with glee painted across their dark-eyed visages, as they watched the crowd go wild. The concert ended with an almighty cheer from the audience, and the band were straight over to the merch stand to sign and pose for photos. It is a testament of their humility that they always carry this out with such good nature.

I have seen this band ten times now, and still their act continues to entertain. With a new album and all-new stage show coming up in six months, they will continue to entertain us all.

For further reading, check out our interview with Silver Dust here and our report of their set at Rock Altitude.