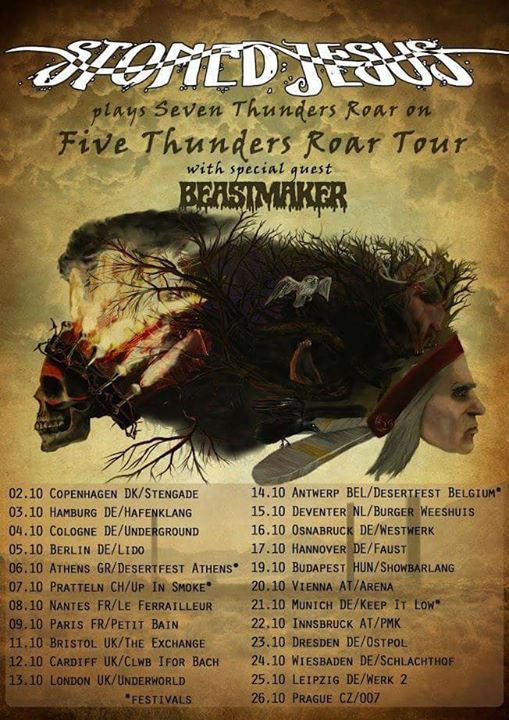 Stoner doom is a genre known for its heavy riffs and even heavier bass lines. Coming in at the more melodic end of the scale is Ukrainian trio Stoned Jesus, whose amusing name is brilliant enough on its own. Supported by Californian trio Beastmaker, whose latest album was covered for us by Toby Saunders, they played their best album Seven Thunders Roar in full for the delighted crowd of Cardiff’s iconic Clwb Ifor Bach on Thursday 12th October.

Enjoying the lack of stage or barrier between band and audience, Beastmaker walked over to the performance area as if they were simply members of the crowd who had been asked to get up and perform. This did not detract from an impassioned performance of their greatest hits, including ‘Inside The Skull’, ‘Now Howls The Beast’, and crowd favourite ‘You Must Sin’. It’s not hard to see why they are rising stars within the stoner genre: their music is pure, but very well-done Sabbath-worship, right down to the emulation of Ozzy’s vocals by vocalist Trevor William Church. John Tucker’s bass playing was so heavy it was actually palpable; the crowd’s bones were literally shaking with the power of the bass. While it took a couple of songs for Trevor’s skillful guitar playing to become more audible over this potent bassline, it was still great fun to experience such bone-crushing heaviness. Trevor himself took full advantage of the intimacy of the venue, walking out amongst the crowd with his guitar during his solos. The aforementioned sound issues aside, Beastmaker put on a storming show, proving they are ones to keep an eye on.

Seven Thunders Roar is one of the most melodic and relaxed stoner doom albums I know, and hearing it live in full was a treat for the ears. The band rejigged the song order slightly, so as to finish on the album’s 16-minute crowning glory ‘I’m The Mountain’, but this was a change that mattered largely to my inner purist. It certainly had no effect on the performance, which had all the power of a true doom band but stripped of any theatrics, and enlivened by the fun that frontman, guitarist, and vocalist Igor Sydorenko was clearly having playing. Where Beastmaker’s music was mostly bass-driven, Sydorenko’s guitar attack blends seamlessly with Sergii Sliusar’s bass into a more potent melodic line. While this helps retain all the heaviness inherent in stoner doom, it also helps the melodies they conjure and weave together to shine through, making for easy, enjoyable listening that translates well live. Neither instrument outshone the other, and Sydorenko’s passionate vocals were not lost beneath them. This was particularly notable in ‘I’m The Mountain’, an epic 16-minute track used to close out this set. They quickly returned for an encore, which took the form of 11-minute barnstormer ‘Black Woods’ from their debut album First Communion, and closed the show with its rousing, thunderous riffs.

Welsh metal is a nascent scene, mostly populated with unsigned local acts. Arguably the biggest name is stoner doom act Mammoth Weed Wizard Bastard [review here] from North Wales. If Stoned Jesus’ set is anything to go by, Mammoth Weed Wizard Bastard may have some competition from the crowd at Clwb Ifor Bach. Buoyed by the excellent melodic stoner doom on display, they were the happiest crowd I’ve seen in a long time, and I have no doubt that Stoned Jesus, whenever they come back to Welsh shores, will be able to tap one or two of those local acts as support.