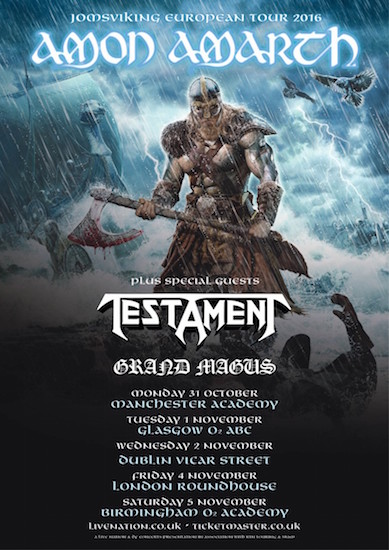 Sweden’s premier Viking invaders Amon Amarth have conquered British shores twice this year; once at Download Festival, and again in November, and departed our shores with a final skirmish in the Birmingham O2 Academy on Bonfire Night, November 5th. With them, they brought previous stage-mates Grand Magus and Bay-Area thrashers Testament.

Given the unenviable task of opening proceedings, Grand Magus put heart and soul into a performance that was sadly overshadowed by the slowly-filling venue, due to some confusion over when the doors opened. [1] The unintentionally empty venue did not phase them, and they kicked straight into ‘I, The Jury’. A commenter in the queue outside worried that, being a trio, the sound might be a little thin. He need not have worried. Aside from a few squeaks on Janne ‘JB’ Christofferson’s guitar, their bass-driven stomp sounded full-blooded and potent, exactly what was needed to get the frozen Birmingham crowd pumped up. Their bombastic brand of melodic heavy metal is tinged with an element of power metal, and JB’s vocals were pitch perfect. A personal highlight was ‘Like The Oar Strikes The Water’, purely on the merit of it being my favourite Grand Magus song, but the crowning moment of their set was closer ‘Hammer of the North’: a fan-favourite, the emotion in JB’s face when the crowd sang along was palpable and moving.

The moshpit went wild for main support Testament, touring in support of their newest album Brotherhood of the Snake. Their heavy, aggressive take on thrash makes them more akin to Slayer or Kreator than the gritty, Viking-flavoured melodic death metal of the headliners or the bombastic pomp of the openers, but the crowd, made up of equal parts old-school thrash fans and younger moshers, loved them. Small as it was, a moshpit quickly opened up during opener ‘Brotherhood of the Snake’. This was actively encouraged by vocalist Chuck Billy, who later provoked numerous crowd-surfers with a query as to whether the venue’s security had the night off. This was the prelude to ‘Over the Wall’, taken from their debut The Legacy, which had the die-hard fans in the audience chucking themselves either at each other, or over the barrier. The security were less than pleased. While Testament are not an obvious choice for an Amon Amarth support act, their meatier thrash playing and near-screamed vocals neatly bridged the musical gulf between Grand Magus and Amon Amarth – and the moshpit certainly got the blood flowing for the appearance of the headliners.

Fully pumped up by the support acts, the crowd could very easily have led their own Viking raid by the time Amon Amarth appeared on stage. Their set at Download involved two draconic longboat figureheads which shot fire from their mouths, and fireworks set off as the encore started. Vocalist Johan Hegg was visibly apologetic that they could not do the same in honour of Bonfire Night, but their set – a big, horned, helmet of mock-Viking style – was suitably impressive nonetheless. The set helped make up for the lack of fireworks, being a fleshed-out version of the one they brought to Download. What really sold the performance, however, was the tongue-in-cheek performance from two recreationists [2] during ‘The Way of Vikings’ from the Swedes’ latest full-length Jomsviking. Shards of wooden shield were sent flying, though nobody was hurt, as the two hacked and thrust at each other with real swords, but it was all in good humour. The two would later return as archers for ‘A Thousand Burning Arrows’ (no members of the audience were harmed), and spear-carriers for ‘Guardians of Asgaard’.

The crowning moment of good-humoured silliness, though, was when the band channelled their inner Spinal Tap for ‘Twilight of the Thunder God’. At Download, as the song’s opening riff thundered over the baying crowd, Hegg used a giant prop of Thor’s hammer, Mjölnir, to set off fireworks. Sadly restricted by being indoors, what could he use this prop hammer for? Fighting a giant, inflatable version of Jormungandr the world-serpent. With the speakers turned up to 11, red light shining from the eyes of the helmet to give it an evil glare, Hegg slammed the hammer into the serpent’s head during the bridge and sent it howling to the depths, much to the audience’s delight.

Theatrics aside, Amon Amarth suffered from the same problem that seems to have always plagued their performances – nobody seems to know how to give Hegg’s thunderous growls the prominence they need to balance them against the guitars. This is a minor issue, however, given that the audience knew most of the words by heart; indeed, the sound guy could well argue that Hegg was simply overwhelmed by the audience. However, this is nitpicking at best: in technical terms, the band put on a brilliant show. Their new full-time drummer Jocke Wallgren filled the shoes of Fredrik Anderson with ease, and as Hegg’s slightly muddy vocals were the only real problem of the night, the show can definitely be classified as a roaring success.