Trending
You are at:Home»Reports»Live Review: ArcTanGent 2016
By Joshua Hall on September 6, 2016 Reports

ArcTanGent is perhaps the friendliest UK festival there is. No other festival I have attended equates to the love found when walking around the festival’s greenery. Covering a wide array of genres, from twinkly emo (American Football) and left-field math-rock/post-rock all the way to technical metal (Animals as Leaders/Monuments), ArcTanGent is no stranger to diversity. Making new friends is a staple of the festival, as everyone chats profusely about the bands they’re excited to see, or starts a wall of death at 2:30pm in the afternoon. It’s unequivocal good fun.

This year’s ArcTanGent came with one big downfall: rain. Thursday was better, but as Friday and Saturday commenced, the heavens opened: A flooded tent started a depressing Sunday morning, and the gale-force winds denied the ability to sit around your tents, sipping beer and chatting incoherently about life. But even with all this, people crowdsurfed, circle-pitted and amused themselves over the three days of festivities. That sort of atmosphere is what makes ATG; it is undeniably positive in the face of adversity. 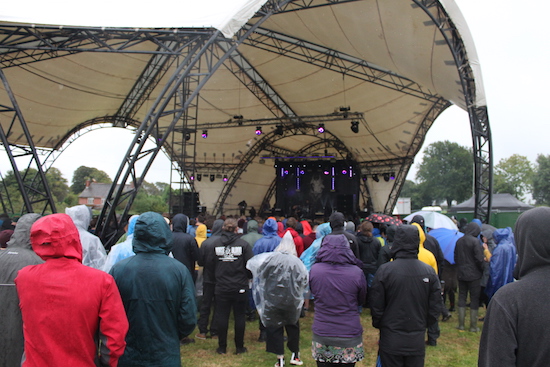 The overall layout of the festival had changed from last years. The smaller stage that housed Delta Sleep last year was instead positioned next to the main The Arc stage, meaning that the four stages were paired next to each other at either end of the festival. Effect and electronic music company BOSS also had their own van-stage, which saw demonstrations of their latest effects and amps demonstrated by bands and musicians at the festival (such as a collaboration with Space Blood and Cleft’s Dan Beesley, as well as Alpha Male Tea Party).

So, let us commence this gigantic review of the festival’s three packed days.