Trending
You are at:Home»Reports»Live Review: Baroness and No Spill Blood at Leeds University Stylus – February 26th 2016
By Tom Woodward-Massey on March 20, 2016 Reports 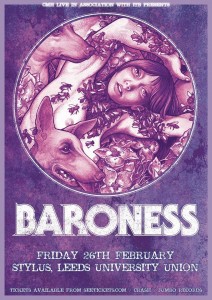 
It isn’t often that when bands play, they are just as ecstatic to be there as the audience members. This is definitely the case for Baroness, who have grins on their faces from ear-to-ear for the entirety of their Friday night performance at Leeds University Stylus. The vested, (mostly) long haired and tattooed band members are a stark contrast to the polished venue with its trendy bar, packed full of beer-drinking revellers. The onlookers surround the balcony, whilst those in the standing area gazed at the stage sporting a backdrop of masterful artwork (designed by frontman John Baizley) from the sunken venue floor. The four-piece’s material is enriched by playing in this live environment, enhancing sentiment and vitality through their performance of mostly recent output.

The support slot for the night is Dublin trio No Spill Blood, consisting of bass, drums and synthesizer. The fuzz of the bass is venue-shakingly heavy, whilst the syncopated drums (which included disco-style beats) forced the room nod their heads in perfect measure, a room which gradually grew in size as their set peaked. Those who missed No Spill Blood missed out on difficult-to-define music of unusual character; sludge metal met industrial with a flair of horror theatrics akin to John Carpenter horror scores [1] thanks to the mind-bending synth-work. The crowd’s enthusiasm increased throughout their set; applause became noticeably louder and cheers became more prominent, leading to a huge ovation as they left the stage; a perfect example of how to get the crowd in the mood for the main event.

Led by the bearded Baizley (guitar/lead vocals), Baroness took to the stage, checked their instruments, nodded and swung into action with ‘Kerosene’ from their most recent album Purple. Purple reveals the tribulations of the group’s horrific tour bus accident in 2013, yet materialises as a foray into anthemic triumphs; the crowd are reflective of the sentiments of the Purple-centric set, singing in fine voice and reacting to the songs with equal delight to that of Blue Record classics such as ‘The Gnashing’. The twofold appreciation between crowd and band created incredibly potent moments of enthusiasm, such as in the chorus of ‘Shock Me’ and the emotive conclusion of ‘Chlorine and Wine’. The newly-utilised keyboards supported the group’s rock effortlessly on these tracks, adding a layer of dreamy psychedelia to their usual sludgy-tech-prog brilliance.

Tracks from Yellow & Green prompted similarly enthusiastic responses; the rolling drums of ‘March to the Sea’ saw the formation of obligatory mosh pits whilst those who didn’t partake watched in awe of the technical musicianship of Baizley and Peter Adams, whose clean, melodic solos culminated in a superb mirroring of Thin Lizzy dual-guitar theatrics. These theatrics are kept to a minimum, although a nice touch is the house lighting matching the colour of the album from which the tracks originated, adding a conceptual flair to the live show. Baroness are overjoyed to be here, and their contentment make the audience feel enormously welcome. Requests for tracks and friendly shouts are bellowed, to which Baizley exclaimed “it’s good to be alive!”. They respond aptly with the echoing opening sounds of ‘Eula’, which are shadowed by mellow, striking vocalisms which extend to potent shouts to form a crescendo of emotion.

Following this, Baroness leave the stage to rapturous applause and chants for their return, which follows with only a moment’s delay. The unmistakable notes of ‘Isak’ begin to sound and the cheers returned, the sole song off the Red Album to be played. The crowd sang to the melodies of Adams’ guitar solo whilst he conducts them at the left hand side of the stage. Surprisingly, this is to be their final song tonight. The house lights are switched on and the audience appear confused; the set seemed a tad short (comparatively, the performance is shorter than other nights on the tour [2], possibly due to the enforced 10pm curfew of the student venue). Regardless of this, they stumble out overjoyed at the music they experienced.

Although Baroness have returned to these shores for prior events following their nightmarish catastrophe, this is their first tour showcasing material from the experience. They did so victoriously and commendably, in a manner which left every audience member with a smiling face and the realisation that although their weekend had just started; nothing would top a Baroness gig.

Footnotes:
1. John Carpenter is a director, screenwriter and composer associated with horror and science fiction films such as Halloween and The Thing. His synth-heavy scores have become iconic and influential, accentuating the unnerving and violent themes of the movies and spawning the genre known as “horror synth”. No Spill Blood effectively captured similar sounds and moods with their synthesizer-led music.

2. Setlists from Leeds show compared with Manchester and Southampton dates via Setlist fm. These setlists are posted from fan/volunteers so may have slight inaccuracies.