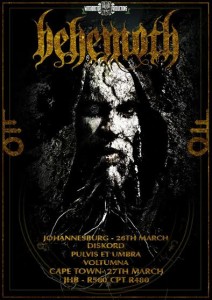 Thanks to the efforts of a few dedicated promoters, South Africa has in recent years finally become a valid port of call for international touring bands. The culmination of this was 2015’s Witchfest festival, a three-day event that saw Johannesburg playing host to acts as diverse as Cannibal Corpse, Alestorm, Decapitated, Septicflesh, Fleshgod Apocalypse, Carnifex and Epica, among many others – both local and international. Although this past Easter weekend was supposed to be Witchfest’s follow-up, the poor economic climate in South Africa left promoters with no choice but to cancel their next big festival. [1] Instead, four of the international acts that had been billed for Witchfest 2016 came to Johannesburg for one night of metal to placate the masses.

Pulvis et Umbra from Italy started the proceedings with a jarring set that vacillated between djent and melodeath. Despite a small audience, frontman Damy Mojitodka’s energetic performance did filter through to a receptive crowd and by the end of a 40-minute set a small, but intense moshpit was in full swing. The penultimate track on the setlist, ‘Lullabye’, was easily the best received by the crowd, balancing clean acoustic passages with straight-up melodeath grind. The relative ‘unknown’ status of the band in South Africa was improved no end by free copies of their 2012 album, Reaching the End to interested parties. This, coupled with the band heading straight to the bar after their show to get to know the locals, made for a favourable reception from Johannesburg.

Next on stage, Norwegian three-piece Diskord took no prisoners, leaping straight into a half-hour of early-90s death metal. While the experience of a death metal singer behind the kit à la Autopsy, rather than clutching a guitar, is unusual, the novelty didn’t save a fairly mediocre performance marred by shoddy sound and far too many guitar effects from new guitarist Dmitry Soukhinin. While South Africa’s metal following does tend more to traditional death than other genres, and repeated salutes of “Skål!” from bassist Eyvind Axelsen did manage to work up the crowd momentarily, Diskord nevertheless failed to make as big an impact as they had hoped.

Third in line and also from Italy, Voltumna were next with their brand of pagan blackened death metal. The four-piece employed theatricality that outstripped the first two acts and were, at first impression, a far more appropriate choice of opener for Nergal et al. A very strong social media presence over the past ten months (since the initial Witchfest 2016 lineup was announced) including a South Africa-specific group on Facebook [2] made for a much more responsive audience than either of the first two bands enjoyed.

While the overall sound – especially on Bruno Forzini’s drums – could have been better (in part due to the headliners taking up over four hours of the available six for soundcheck, if Voltumna themselves are to be believed), the self-styled ‘Etruscan Priests’ delivered a tight, powerful performance comprising mostly tracks from their most recent release, 2015’s Disciplina Etrusca. A rigorous touring schedule across Europe and Russia was evident in the band’s show, which came across as the most polished of the night thus far. Vocalist Simone Scocherra put on a convincing portrayal as High Priest, though more audience interaction would have won the band more fans. Guitarist Michele Valentini’s use of seven-string tuning on a six-string guitar suited the contrast of slow chugs and tremolo riffs that made up a fair proportion of the band’s material. Despite having already drawn a crowd almost double the size of the opening acts, when Voltumna launched into their cover of Venom’s ‘Black Metal’, the venue noticeably filled as a very respectable moshpit opened up. The forty minute set flew by, and ended far too quickly for the crowd’s liking.

Witchdoctor Productions’ backline crew very quickly and efficiently cleared the stage for final sound check, and barely twenty minutes elapsed before the lights went down and the opening strains of ‘Blow Your Trumpets, Gabriel’ rang out as Behemoth took the stage. While Voltumna were excellent, Behemoth were incandescent. This performance of 2013’s The Satanist in full showcased a band at the top of their game: having already experienced their original The Satanist tour in late 2014, it was incredible how much they refined this show to the point it is now. What was immediately evident was the vastly improved band dynamic: Nergal and Seth shared far more lead guitar duties, while Orion took on a greater portion of the vocals as well.

Make no mistake, though; despite these seamless interchanges, this was still Nergal’s show: he was the consummate frontman, leaping along monitors, handing out the new ‘Furor Divinus’ eucharist wafers and swinging thuribles of incense between barking out lyrics with unmistakeable passion. And it was this passion that translated to his audience as well: tears flowed unchecked down any number of faces throughout most of the show, a phenomenon I have never witnessed at metal shows in South Africa in over twenty years of attending gigs. While the big ‘singles’ from the album – particularly ‘Ora Pro Nobis Lucifer’ – were massive crowd pleasers, it was the closing track, ‘O Father O Satan O Sun’ that dragged palpable waves of emotion from the attendees. Fists and horns were raised, but in subdued reverence. Following this, Behemoth returned to the stage for a mini-set of encores made up of old favourites ‘Pure Evil and Hate’, ‘Antichristian Phenomenon’ [3] and ‘Conquer All’, before ending the night’s festivities with ‘Chant for Eschaton 2000’.

Sadly, this unforgettable experience was soured for everyone on the so-called VIP list, as a meet-and-greet that was to include book signings – which had been in the works since May last year – was called off at the last moment with very flimsy excuses given. Further salt was added to this wound the following night, as an open meet-and-greet was enjoyed by the entire Cape Town audience. So yes, Behemoth may be putting on some of the greatest shows in contemporary metal, but whispers nevertheless could be heard, asking if they could be forgetting the fans that make their lifestyles possible, especially in developing countries where any kind of international performance is a rarity. In Behemoth’s defence, broken promises to the paying fans have unfortunately become something of a staple when dealing with the local promoter, Witchdoctor Productions. One can only hope they remedy this before their next event (Fear Factory recently added South Africa to their current Demanufacture 20th anniversary tour for two shows in June, and Rotting Christ are touring the country in July), or the South African metal scene may well find itself facing a new drought of international metal concerts.

Footnotes:
1. The official reasons for cancellation were given here.
2. Here is an officially endorsed band page for Voltumna. Not only does it maintain regular posts by its admins, the band themselves are active users.
3. The inclusion of these two numbers is particularly apt, following religious protests at so-called ‘satanic’ shows in South Africa. See examples of this posted by Nergal himself, one and two.

For further reading, you can also check out Dan Jackson’s live review of Behemoth’s show with Cannibal Corpse here.