Trending
You are at:Home»Reports»Live Review: Behemoth & Cannibal Corpse at The Sunshine Theater – 2nd Feb 2015
By Dan Jackson on March 6, 2015 Reports

New Mexico isn’t exactly renowned for its metal scene. The best of its moderate contributions to extreme music at large are Word Salad, Noisear and, more recently, Predatory Light and Hollow Tongue. Albuquerque in particular is known more for meth and Breaking Bad than anything musical. The crowds for metal shows in general seem to be increasing, and more and more tours are starting to include a stop in Albuquerque rather than just driving through it on their way to Phoenix, Arizona or western Texas.

For my part, it’s my first time seeing either Aeon or Tribulation live. It’s been ten years since I last saw Cannibal Corpse, and twelve years since I last saw Behemoth. That Behemoth show had them playing before Deicide and just after Amon Amarth and Revenge. I bet the order for that tour might be different if it were to take place now.

I was still waiting in line, waiting to get into the show when Tribulation started their set. There was a small group of crust punk kids asking to bum smokes from people in line. I don’t think they’re local, though: the venue doesn’t allow you bring cigarettes or lighters inside, so no one brought any with them. I wonder if they thought we were all completely void of compassion. On the surface it probably seemed like a promising opportunity for them. The security is much stricter at The Sunshine Theater than it is at The Launchpad, which hosts tours that are a notch below this as far as expected attendance goes. The man who patted me down had to confirm with his supervisor whether or not it was okay for me to bring a pen and notebook into the show. They determined that I didn’t look like the type to vandalize the place, and let me bring the pen and notebook into the theater. I couldn’t help but feel a little insulted that I came out on the positive end of their social profiling.

I only get to catch about two-and-a-half songs of Tribulation’s set, but what I do catch is excellent. They’ve got so much personality, and they pull off the material from The Formulas of Death tremendously. They don’t do much as far as pulling faces for the crowd or hamming it up for added entertainment value; they’d rather let the music speak for itself. Still, they have a kind of cool charisma, even though they aren’t really doing much to actively engage us as spectators. You get the sense that Tribulation are only beginning their upswing, but they’re also a weird fit for this particular bill. I’d love to see them on a tour with In Solitude and Enslaved, for instance.

Aeon is up next and I feel bad for them. I’m not sure what happened sound-wise, but the mix is really rough. Nothing really had any definition to it. The guitars sounded muddy, the kick drum was a deep hum that left 16th and 32nd notes notes virtually indecipherable. The snare drum cut through well enough, but it had a weird electronic drum kit sound to it. As far as I could tell, their performance was spot on from a technical standpoint, and the crowd seemed to be into them even more than Tribulation, though I believe some of that can be explained to an extent by Aeon being a better fit for the headlining acts. 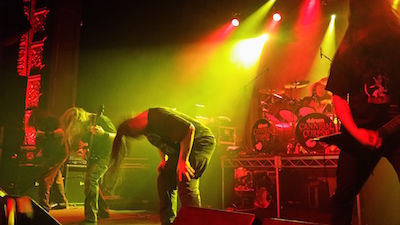 Soon, Cannibal Corpse take to the stage, which surprised me a bit at first. I would understand why by the end of the night, but Cannibal still seem like the bigger band, at least in the U.S. Their setlist was made up of a lot more mid-to-late 2000s material than I was prepared for, but a lot of those songs play much better in a live setting than they do on record. Everyone is on the ball tonight, and the sound is massive. The newer songs came across well enough that I want to go back and revisit their respective albums. Even Gore Obsessed, which I’ve always been lukewarm about, was exciting tonight.

They hit a handful of the old school favorites: ‘Stripped, Raped and Strangled’, ‘Skull Full of Maggots’, ‘I Cum Blood’, ‘Devoured By Vermin’ and ‘Hammer Smashed Face’. ‘Kill or Become’ will likely join them as a live staple for years to come as evidenced by the crowd being ready for Corpsegrinder’s “fire up the chainsaw” line during the song; it seems to be a hit among the faithful. We might take a moment to appreciate how good Cannibal Corpse is at this stage in the game, given the time they’ve put in. You might also take a moment to consider where most bands are at after twenty-five years, not just in death metal, but metal or hard rock in general. Their dedication to quality and overall perseverance is remarkable.

I mentioned earlier that it would make sense to me later why Behemoth went on last. I’m not sure if this is the order for the whole tour, but pragmatically it makes more sense for Behemoth to go on last, even if they aren’t necessarily the “main event”. There is a ton going on visually: the props, the more elaborate light show, the fire, the smashing of a Catholic priest’s thurible.[1] It seems obvious now that Behemoth would be a lot more visually-oriented than Cannibal Corpse, but it still surprised me to some extent. 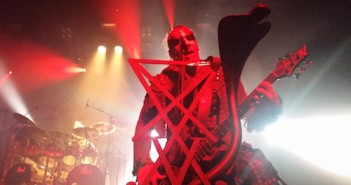 When I last saw Behemoth twelve years ago, it was in on a stage barely six inches off the ground in a place that wouldn’t have fit half of this crowd. Just like with Cannibal Corpse, even the material I’ve never been a big fan of – from the albums after Thelema.6 but prior to The Satanist – fares really well in a live environment. The songs chosen from The Satanist sound fantastic in this setting, which should be no revelation if you’ve heard the studio versions. What I wasn’t prepared for is just how much of the vocal responsibilities fell to Orion and Seth, and both performed admirably. It also communicates that Behemoth are a band where every member’s personality plays a part, as opposed to a dynamic of “Nergal and his backing musicians”. It felt like a Nile set, though the three vocal styles vocal styles don’t contrast as strongly as they do in Nile.

What stood out to me most, besides all of the ceremony and music taking place on stage, was just how different this crowd was compared to all of the shows I went to last year. I saw Eyehategod, Pallbearer, Deafheaven, The Dillinger Escape Plan, Toxic Holocaust, Thou, and more last year. None of those crowds could hold a candle to the rabid excitement the people were experiencing. The reactions for Cannibal Corpse and Behemoth were deafening. People chanted and screamed without relenting, which warmed my heart, as much as I worry about the world growing more and more jaded as I age. This crowd that wasn’t jaded or callous. They weren’t worried about completely losing their minds for a few hours, seeing the bands they loved. These bands are like gods to them, and the audience has treated them like something special. Imagine that. 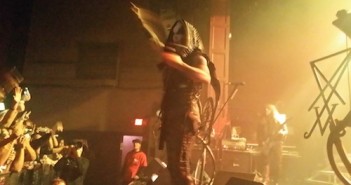 All photos credit to Dan Jackson.

Footnotes
1. A thurible is a religious object used for burning incense in Christian religious services, especially in Catholic and Eastern Orthodox churches. http://en.wikipedia.org/wiki/Thurible

Nearly fourteen years after their Dark Order EP launched them into the collective underground consciousness, Aeon continues to put out solid if unremarkable death metal albums. These days they seem to rely more on rhythmic and technical prowess rather than songwriting hooks and personality. Their latest is 2012’s Aeons Black.

Cannibal Corpse are death metal royalty and probably the closest thing to a household name the genre has ever produced. Last September they released their twelfth album A Skeletal Domain, and among several high points, it features what may be their most crowd-pleasing song in years: ‘Kill or Become’. They’ve maintained an impressive level of quality for the vast majority of their twenty-five-plus years as a band, and don’t appear to be losing any momentum.

Behemoth’s tenth album, The Satanist, was released in February 2014 after Nergal’s hellacious battle with, and eventual victory over leukemia. The album saw Behemoth partially return to their blackened roots, and in turn put out their best material in over a decade. The band is at a peak both creatively and in popularity.