The last couple of years have been incredibly favourable for Black Peaks. From playing in Bristol’s tiny Academy 2 as part of the Hit The Deck Festival in March 2015 to being main support for Deftones’ Wembley Arena show in June 2016 – and somehow managing to fit in the release of their debut record Statues as well – the band have gained unprecedented levels of success in an extremely short amount of time.

Moles, located in picturesque Bath, is the venue of choice for one of the final shows to bring the Statues touring cycle to its conclusion. First onto the stage are Bad Sign, a three piece from Croydon, London (a point they are proud of and make several references to during their set). While the rising crowd shuffled across the relatively small venue, the band played half an hour of ballsy riff-laden heavy metal combining the best characteristics of bands such as Mastodon, Clutch and Servers.

In a similar trajectory to Black Peaks [1], Bad Sign have continued to jump onto various tours to gain momentum and awareness culminating in the recent Hacktivist tour [report here] which further broadened their fan base. The band consistently wowed the crowd with head banging grooves, soulful vocals and intense crowd interaction – including playing guitar and bass in the middle of the crowd at various points. Ending on their best known track ‘The Recidivist’ from their latest EP Destroy, the band performed a slightly altered version of the song which ended in a thrilling combination of instrumental heaviness and flailing limbs. 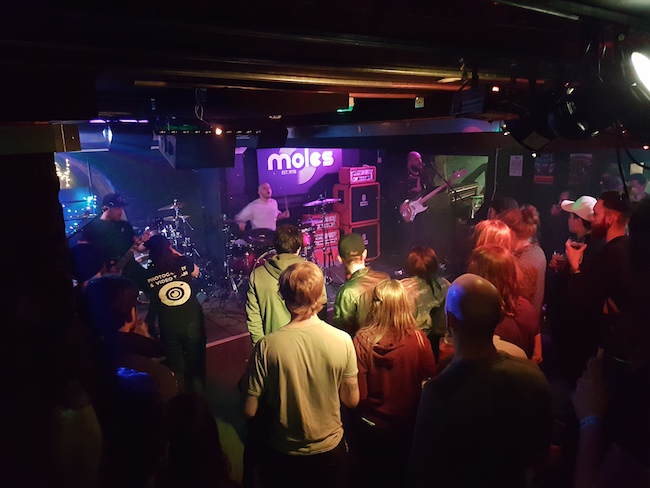 As you could imagine, main support and fellow Brighton-based crew Tigercub had a tough act to follow as they approached the stage. With the vocalist/guitarist disappearing behind a ceiling-mounted speaker (the guy must have been over six and a half feet tall), it was difficult to garner much vibrancy early on. However, the set soon picked up in pace and was matched with a fuller crowd head banging and interacting with the band in equal quantities.

With a sound that could be described as “Muse meets Royal Blood”, the consistency of the band’s material was solid if a little underwhelming. Momentum peaked at several key moments during tracks, to the point where the crowd were visibly revelling in the energy, only for the pace to drop due to an instrumental passage, or perhaps simply that the band are still relatively unknown, and as such the song structures were unexpected. Nevertheless, an interesting build up to the headline act.

This was my fourth time seeing Black Peaks in the last two years, and the growth of the band’s live performance during this timescale has been enormous. With vocalist Will Gardner smiling virtually throughout the whole set – and the rest of the band clearly enjoying themselves – Black Peaks are a band that are clearly living their dreams in the present. A nearly-75-minute set time meant the band could afford to play near enough the whole of Statues, as well as throwing in a new song to close after confirming that they are busily writing the follow-up album. The new song followed in the same vein as their current roster, with an impressive mixture of post-hardcore, emo and progressive metal thrown together in a seamless style. It was, needless to say, greeted by rapturous enthusiasm.

The audience elevated the show into one of the most thrilling live performances Moles has surely seen in quite some time. From the very first note of the opening track, an enormous swell of people in the middle of the venue started throwing themselves against each other in a combination of crowdsurfers, stage invaders and the rest of the venue screaming back the lyrics to the band. Several invasions into the crowd from both Gardner and guitarist Joe Gosney (including Gardner reaching the bar at the back of the venue, resulting in several people lifting the mic stand in the air!), created pandemonium and really added to the electric atmosphere already present.

From playing tiny 200-capacity venues in Somerset to being main support to one of the biggest metal bands in the world at Wembley Arena (and at the time of writing, they have just landed a support slot on Bury Tomorrow’s upcoming UK tour), Black Peaks have continued to show their adaptability and mainstream crossover in a way that not a lot of people could have foreseen. On this performance, you can rest assured that arguably their days of playing smaller venues has come to an end. 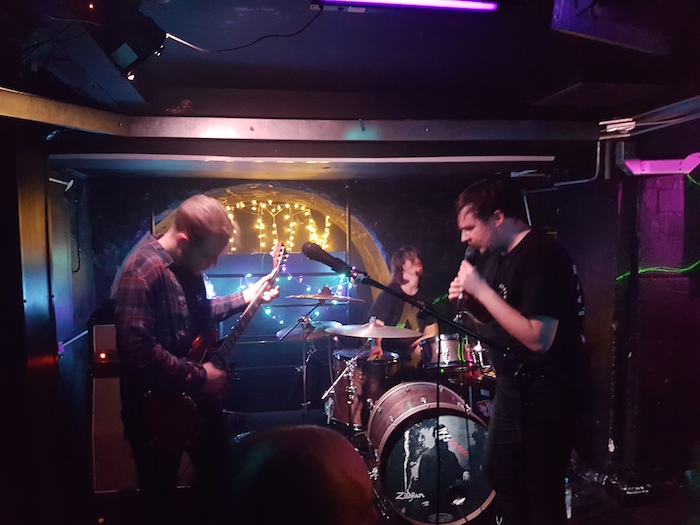 1. They also shared the same stage at the aforementioned 2015 Hit The Deck Festival.