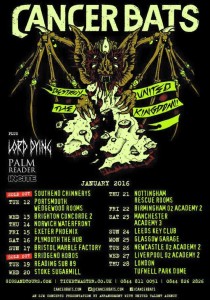 On a cold and wet Sunday evening, there was no surprise that the crowd for openers Incite was fairly sparse. Despite the small attendance, vocalist Richie Cavalera (son of Sepultura legend Max) gave an extremely energetic performance, galloping around the stage and banging his head with aplomb. As the crowd increased in numbers towards the end of their set, the Lamb Of God-esque groove metal that flowed out of the band eventually struck a chord, and by the end generated a decent amount of crowd participation.

One of the emerging jewels in the UK hardcore scene were up next. Probably the most out-of-place band on tonight’s bill, Palm Reader struggled to connect with the audience throughout their set. Their mix of progressive heaviness, discordant riffing and overall vocal dynamic sounded wonderfully technical and aggressive, however, the majority of the crowd preferred to try and compute what was going on rather than create movement in the pit. Top marks for the band’s effort levels though, from jumping around the stage to shouting at the crowd, doing their best to generate some momentum.

It was amazing to see this next band in the country, let alone perform onstage. Lord Dying, hailing from Portland, USA, specialise in a variant of sludge metal commonly associated with bands such as Mastodon, Anciients and High On Fire. What made it surprising to see them onstage was that a week before the tour commenced, guitarist Chris Evans’ sister had tragically passed away – the fact that he still made the trip overseas for this tour is evidence of the band’s dedication to continue in the face of adversity.

On top of this, bassist Dan Capuano had recently left the band, meaning that Lord Dying played as a three piece. What the band lacked in bass, they more than made up for in headbanging heaviness! Riffs by the bucket load, sumptuous guitar solos with both guitarists trading off against one another effortlessly, and a harsh vocal display from man-mountain Erik Olson shook the venue to its very core. Olson’s demeanour in between songs was that of a shy individual who may not quite comprehend the impact that his band’s music has on its audience, a sea of heads banging in tandem with the rhythmic onslaught throughout the whole set. This performance was perfectly made for a warehouse in the middle of a desolate Bristolian industrial estate, and completely stole the show.

Not many bands could have followed that scintillating set from Lord Dying, but then Cancer Bats aren’t just any band. It’s important to note at this point that vocalist Liam Cormier spent the majority of the night up to now in the merch booth, having pictures taken with fans, personally selling them shirts and generally socialising with the crowd. This sort of artist-fan relationship is rarely seen in shows of this size, and only strengthened the image of him as a top-notch person. Cormier also announced halfway through their set that he will be shaving his hair after the tour had ended for a cancer research charity, with a wellington boot on display at the merch desk for people to donate money into.

The band played a 70-minute set chock full of anthems from start to finish, displaying a wide range of material that encapsulated their history. A large proportion of the set came from, understandably, their last two records Searching For Zero and Dead Set On Living, while also touching on deeper cuts of their older material, including the gloriously anthemic staple ‘Hail Destroyer’. Their fusion of hardcore punk and sludgier moments sent a feel good wave of energy through the audience with countless crowd surfers, moshers, headbangers and singers combining to produce an atmosphere worthy of a grander scale.

Cormier was in fine form, prancing around the stage and bouncing up and down song after song, playing into the crowd’s hands and lapping up the attention. The staple cover (and crowd favourite) of Beastie Boys’ ‘Sabotage’ caused a mass riot, before they closed the set out with ‘Satellites’, the careering opening track from the new record. Despite a total of 19 tracks, the set seemed to be over before it started, which is tantamount to the spectacle that is Cancer Bats at their very best. After 12 years of rising through the underground, they can now truly state that they are at the peak of their creative and performing talents – may there be many more years to come!