Trending
You are at:Home»Reports»Live Review: Conan, The Bendal Interlude and Boss Keloid at The Star and Garter – April 11th 2016
By Tom Woodward-Massey on April 25, 2016 Reports 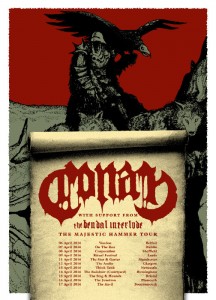 It’s a rare occurrence when bands of this caliber from the same region share the stage for the night, yet this was the case for headliners Conan, their fellow Liverpudlian friends at The Bendal Interlude and stones-throw-away Wiganers Boss Keloid tonight in Manchester. Granted, it wasn’t a conscious decision, it just so happened that a group of North West label mates were set to play the infamous Star and Garter. This first-rate selection of bands, each having ample likenesses in audience-appealing stoner metal yet possessing enough act-to-act variation to keep the spectators on their toes for the gig’s duration. The night proved an effective showcase for the province where the healthy metal scene is often overlooked by musical nostalgia.

The first slice of music tonight is from Boss Keloid, a group who have just stepped out of Conan’s very own Skyhammer Studios to record their amusingly titled sophomore album Herb Your Enthusiasm. Positive buzz for the record and reputation surrounding past shows across Manchester pre-destined them for a packed crowd, an impressive feat considering support groups are often skipped over. The group combine the distortion-inflicted groove of stoner metal with the technical aptitude of more progressive metal. This descriptor profile may catch the ears of Mastodon and Baroness fans, however their music is much more difficult to pinpoint than that; often sounding comparable to Tool with their evolving time signatures and diligent guitar riffs, evoking mathcore with dissonant, metallic instrumentation and even echoing Kyuss due to vocalist Alex Hurst’s paint stripping, John Garcia-like vocals. After a fantastic performance with comedic interludes from Hurst, the crowd hurried to the downstairs bar, only to return shortly after the clamours from the upstairs venue returned.

These clamours arose from The Bendal Interlude who, like the openers, are a staple of Conan founder Jon Davis’ Black Bow label. They display an incredible amount of energy, unsurprisingly considering half of the bands background is in the crossover thrash stylings of SSS, with vocalist Nat Gavin performing from the venue floor directly in front of the audience for the entirety of the set. The attendees at the back of the crowded venue may not have been able to see him, but they without a doubt heard his raspy shrieks. Notably differing from their peers tonight, The Bendal Interlude specialise in thrash-tainted stoner metal, offering bouncy Southern sludge-esque riffs, galloping percussion and a heap of bluesy, hard rock swagger. And to top it off, a gloom-dripping audio clip is played between the songs, creating a seamless and cinematic performance.

After viewing the support acts from the sidelines, it is then the turn of ‘caveman battle doom’ purveyors Conan to take to the stage. Their frontman/guitarist Jon Davis announces tonight is their twenty-fifth show at The Star and Garter and whilst this might seem exaggerative, Conan perform at a level of familiarity akin to playing on home turf. The sound is devastatingly loud, with the bass-heavy riffs creating rumbles that shake the whole venue. Many of the audience members have undoubtedly witnessed Conan live numerous times, however by using their set as a platform to showcase new material from latest album Revengeance [reviewed here], they adeptly offer new sounds in the form of the high tempo title track and the effect-laden psychedelia of ‘Earthenguard’ to their familiar template of slow-burning doom.

The high-pitched battle-cry yelps from Jon are matched in sheer velocity by bassist/backing vocalist Chris Fielding’s thunderous low-pitched roars. Between the slow-motion headbang-inducing guitar work, drummer Rich Lewis fills in the gaps with technical flair and clinical cymbal hits that slice through the crunching fuzz, a dynamic which prevents the stripped-back riffs from descending into monotony. Conan’s music is intensified and augmented in the live environment, owing to the intense and almost physically affecting quality of the volume and sub-bass emanations; it feels like an assault on the senses, albeit a gratifying one. Classic tracks such as ‘Hawk As Weapon’ are thrown into the mix, revealing the group are conscious of audience desires to hear a assortment of the new and old, a procedure which provides many high-points to their one-hour set.

The performance tonight shook every inch of The Star and Garter; it’s easy to see why Conan are one of the most discussed acts in British doom metal. Armed with support from their corner of the North of England, the show tonight was an excellent showcase of talent, and a lesson in keeping things exciting when falling on familiar (now extremely deaf) ears.

For further reading, check out our interview with Rich Lewis, or our review of similar riff-loving doom act Greenhorn.