Trending
You are at:Home»Reports»Live Review: Damnation Festival 2016
By Richard Lowe on November 25, 2016 Reports 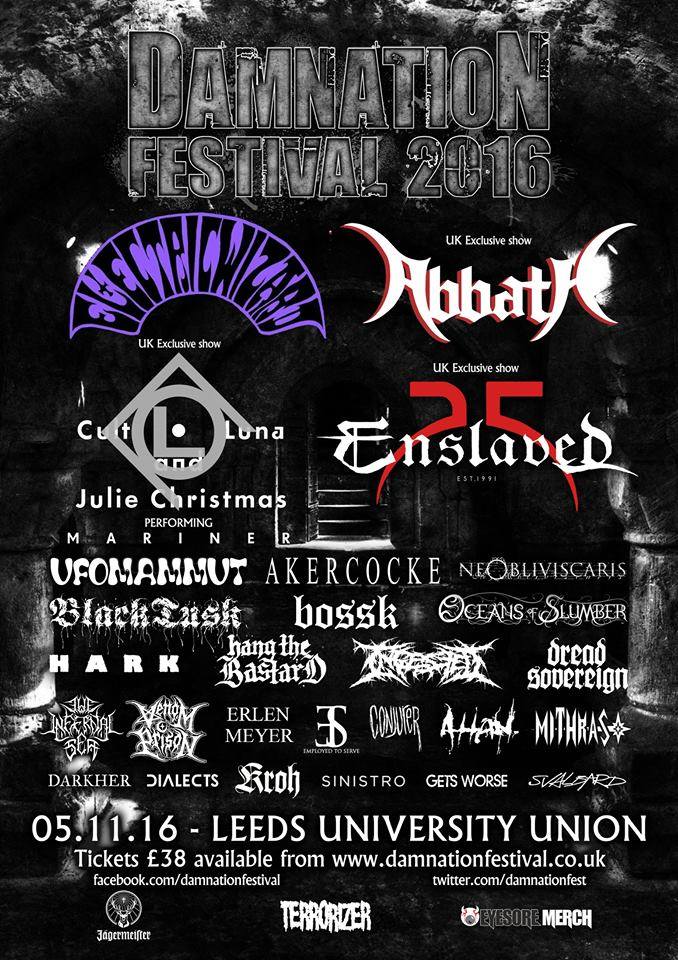 It’s a sunny, frosty morning in Leeds. Whilst stereotypically a storm of lightning might be a good portent for a day’s metal, the sun rising over Leeds’ city centre is a portent of the freshly energised UK metal scene we witnessed at this year’s Damnation. 2016’s lineup is formidable, incorporating everything from 2016’s spawn of Conjurer, Venom Prison and Bossk, to a list of greats from times past – with everyone from Cult of Luna, Abbath and Electric Wizard bringing their veteran riffery to the festival’s vaunted mainstages.

Whilst the Eyesore stage is packed out for Conjurer, it’s straight to the Terrorizer stage to catch Mithras. Despite a fair bit of awkwardness around the pre-recorded intro, Mithras step into an obviously finely-honed groove, but it’s their tightly wound thrashing that makes the biggest impact. It’s not all plain sailing however, as the band’s transitions from melodic setpieces into blasting intensity are awkward – the band’s vaguely blackened racket is great, but the format gets stale after a while. Whilst Mithras’ fans in the audience lap it up, the band’s clumsy juxtapositions haven’t won them any new fans today.

In sharp contrast to Mithras’ complexity, Hang The Bastard bring their Southern-drenched, no-frills groove to the Jägermeister stage. On the last leg of their final ever UK tour, the band display exactly why they’ve been invited to the mainstage; their tightly wound, veteran racket pummels through the audience with expertise. Whiile the band’s metal-oriented sound might disappoint the heads of the band’s hardcore heyday, their tightly rehearsed, veteran racket keeps everyone entertained.

Venom Prison are the first band to truly wow. The hardcore-inflected death metal wunderkinds – fresh from a tour with Dragged Into Sunlight (which also scored them a shining endorsement) – sound refreshing, reminiscent of a far more frantic early Swedish scene. From the get-go the band’s grinding racket is just as impactful; there are no self-indulgent leads or awkwardly rehearsed sets here, as the band effortlessly channel the experience they’ve gained over the past year. They tear through tracks from their finely-honed Animus [review here] at face-ripping tempos. The band’s no bullshit approach endears them to the crowd, leaving the room wanting more as the band’s tragically short thirty minute set winds to a close. 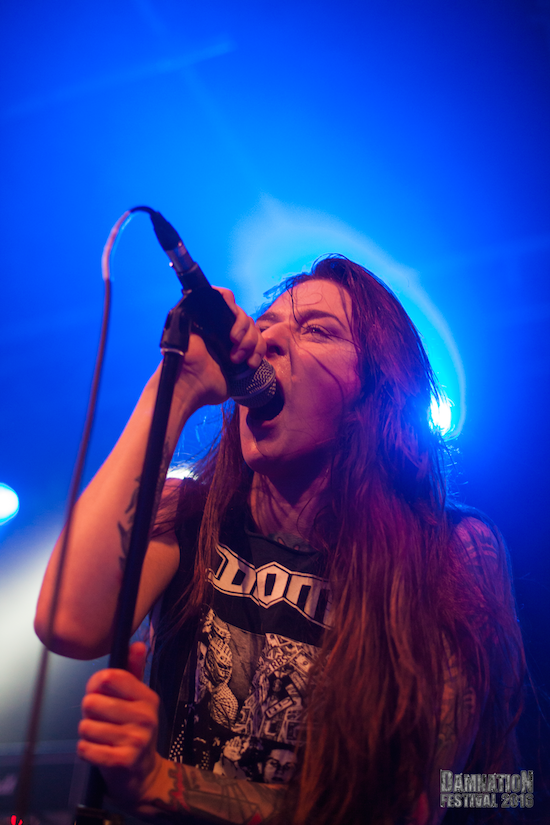 Later on – Employed to Serve’s hardcore racket has the 4th stage packed out. The band’s compressed, violent racket quickly wins the crowd over, and even in the light of technical difficulties the band get security all excited – inciting an already rabid crowd to a wall of death in the midst of their set. Vocalist Justine Jones continues this year’s trend of female vocalists massively outgunning their male counterparts with a roar perfectly complementing the band’s razor-sharp tech-grind assault. The band even keep the crowd enthralled during the nominal melodic sections channelling Chaos A.D.-era Sepultura, and the maddened fury of Infest where the bassist nearly kills his own bandmates with climactic smashing up of his instrument. 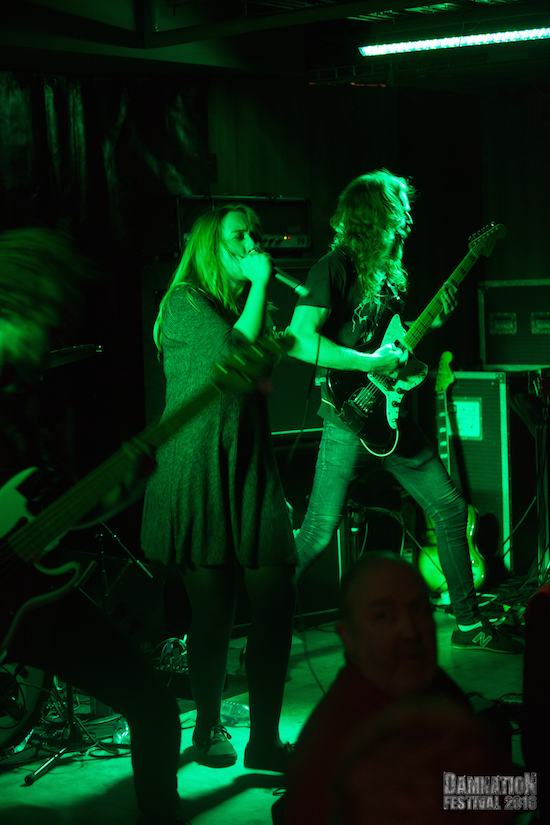 Despite some problems with the Eyesore stage’s capacity (on the bright side this has to mean this next band will be on a larger stage next year) Bossk‘s serenades flow between post metal atmospherics and balls-out doom. The band’s effortless flow eschews song titles, and their entire set functions almost as a singular piece of music, or an extended soundscape – from the strobe-guided guitar melodies to the wonderful surprise reading of William Burroughs’ Junkie. Even when the room fills out, the band’s impact isn’t softened one bit – the unspoken hymns speak for themselves – as the cosmic euphoria echoes around the room, touching any and all in its path.

Continuing in the storming post-metal vein, headliners Cult Of Luna return to Damnation with potentially their last ever UK performance of the world-beating Mariner [review here], featuring the vocal talents of Julie Christmas – the perfect contrast to the band’s crushing progressive sludge meanderings. The suspense created by the almost shoegazey approach is superseded by the atmospherics of the band’s softer sections, nestled alongside these are the parts that show the band are well-rounded – the crush in ‘The Wreck of S.S. Needle’, for instance. The vocal dynamics and musical contrasts on offer are a perfect example of the genius of Damnation’s varied lineup. 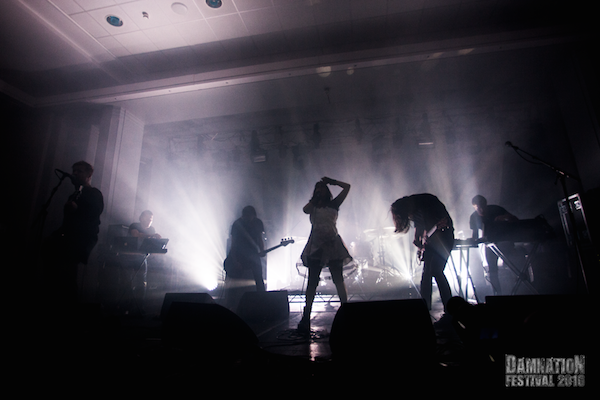 Arguably Abbath makes the appearance of the night, as one of two Norwegian black metal heritage acts on the stage today. Abbath absolutely slays, making the Jägermeister stage his own. At first the band’s performance is a bit strange – it’s a totally different vibe to Immortal, everything from the Marilyn Manson-lookalike backing band, to the synchronized handclaps to ‘Solarfall’ seems wrong – it’s a contrast to Immortal’s live show, but it doesn’t matter. 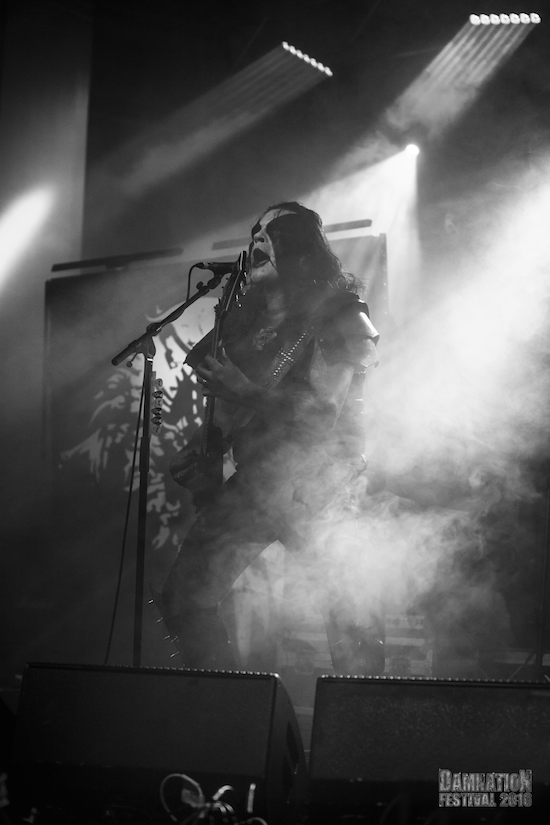 Despite being drunk as ever loving hell, Abbath and his backing band are tight as anything – providing a face melting wall of noise as they smash out classics of Immortal’s catalogue, and newer tracks courtesy of Abbath’s solo material with ferocious aplomb. The muddiness of the sound is irrelevant; despite his status as a heritage act, Abbath doesn’t keep things clean or tidy as he keeps to that old school black metal ethos. He eschews pristine sound in favour of a barrage of hypnotising sound. Abbath has the crowd eating out of his hand with his stage presence, showing that even without Immortal, he’s still the king of the frostbitten wastes.

Closing off the evening are Electric Wizard, a band that seemingly everyone at Damnation is here to see. This year’s Damnation has been one where convention has been turned on its head – from the get-go, Electric Wizard are on earth-shattering form, showing every single attendee at the Jägermeister stage how stoner metal mastery is done. Whilst the perfectly clean sound is at first jarring, it’s refreshing to hear ‘Funeralopolis’ and ‘Witchcult’ banged out in perfect clarity, and tightly rehearsed to boot. It’s almost as if you’re listening to the songs on record – performed in that perfect balance between precision and loosely-formed groove due to the rumblings of fresh drummer Simon Poole. Whilst the fuzzy aesthetic of their records may not be present, the band’s mastery of their own music is formidable and drives the crowd into rabid, headbanging frenzies from start to finish.

This year’s Damnation was one full of surprises – from the triumphant rebirths of Electric Wizard and Abbath to the solid steel performances from a plethora of newcomers (Bossk and Venom Prison in particular) demonstrated a second coming for the metal scene – rekindling at least one doubtful old metalhead’s love for the genre. Apart from a few problems with capacity – which in themselves were indicators of just how huge the festival has become – 2016 was an amazing year for Damnation. Bring on 2017!