Trending
You are at:Home»Reports»Live Review: Delain, The Gentle Storm & Kyshera at The Marble Factory – 22nd October 2015
By Megan McMillan on January 13, 2016 Reports 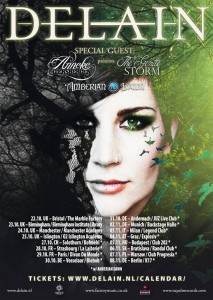 Dutch symphonic metal band Delain have built up quite a following on UK shores over the years. One of their biggest shows back in 2014 was supporting Within Temptation on the European leg of the latter’s world tour, before Delain headlined the Sophie Stage at Bloodstock earlier this year. Now they’ve embarked on their own headlining tour in the UK which kicked off at The Marble Factory, an intimately-sized venue on the edge of Bristol. It’s the perfect place to watch a band as you can get up and personal with them; even if you’re at the back you still get a perfect view of the stage.

That night there was a lot to be excited about. Not only were the audience getting to witness a band who put on an incredible live show, but Delain had chosen a top-notch support act in the form of Welsh rockers Kyshera, who gave a bold performance that matched their powerful sound. They were a mix of Enter Shikari’s electro-tinged enthusiasm and the groove of alt-rock acts such as Kids In Glass Houses, and it helped immensely that The Marble Factory has amazing sound, so each song hit with impact. The trio rocked the stage with confidence, bouncing up and down, and their energy drove the crowd to be very responsive to their electric set, dancing around in the small space.

Next up were a band who have developed a cult fanbase in the UK: The Gentle Storm, formed by two great Dutch musicians, Arjen Lucassen (who does not tour with the band) and Anneke van Giersbergen. Despite only releasing their début album in 2015, the band conjured up an incredible live show for Bristol that evening. Anneke’s voice has a real angelic quality; her beauty and flawless vocals dominated the stage. The Gentle Storm showcase an eclectic stream of styles under these vocals, from softer, ballad-esque tracks like ‘Endless Sea’ to more forceful, metallic numbers like, ‘The Heart of Amsterdam’ with a serious velocity that summarised the band’s name. Overall, The Gentle Storm displayed a great amount of musicianship and professionalism on stage, and left a very strong impression.

After these two incredible sets, it was finally Delain’s turn. Similar to van Giersbergen, Charlotte Wessels immediately came on stage and took charge of the place, her vocals crystal clear but were still utterly powerful. The band had a stripped down stage show, with a set devoted to their fans that was dotted with crowd pleasers like ‘April Rain,’ ‘Get the Devil Out of Me’ and ‘Not Enough’. You can feel and see the passion in their performance, the guitarists who are giving it their all, the drums which are on point and of course, Charlotte who belts every note out with such emotion.

When I spoke to Wessels, she mentioned they would be pulling out tracks they don’t often play live, such as ‘The Tragedy of the Commons,’ and even a brand new song called ‘Turn the Lights Out,’ which is based on Neil Gaiman’s The Sandman comics. This was something that really excited me and I wanted to hear the song, but unfortunately I had to leave the gig early. It’s a shame as Delain were spectacular, and I can wholeheartedly recommend them to symphonic metal fans who look for strong stage presence. The band are at the top of their game right now, and the new material cannot come soon enough.