Trending
You are at:Home»Reports»Live Review: Devin Townsend at the Roman Amphitheatre, Plovdiv – 22nd Sept 2017
By Marc Westhoeve on October 11, 2017 Reports 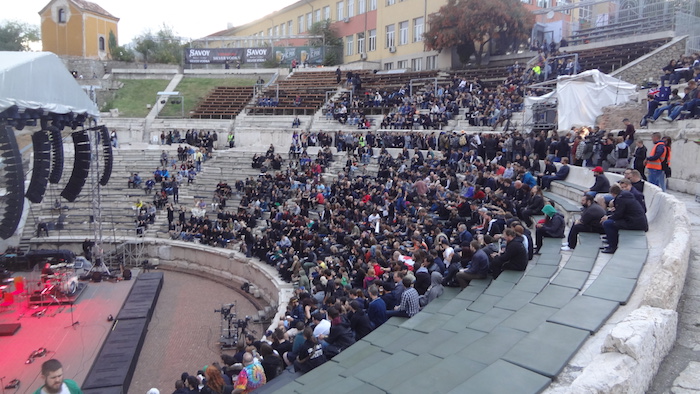 When the Romans built the amphitheatre in Plovdiv, Bulgaria in the early 2nd century, they probably didn’t expect metal and rock bands to perform on the very same stage 2000 years later.

In previous years, bands like Anathema, Opeth, Paradise Lost and Katatonia have performed together with the Orchestra of State Opera Plovdiv and Rodna Pesen Choir, conducted by Levon Manukyan, at this beautiful venue. This year the Devin Townsend Project takes to the stage of the ancient theatre to perform a ‘by request’ set with the orchestra and choir, followed by a full performance of Ocean Machine – which is celebrating its 20th anniversary – without the orchestral addition.

Once Devin Townsend takes the stage, he uses the first couple of minutes to thank everyone involved in making this happen; it’s a dream come true for him. After some typical self-deprecating humor (and also declaring he’s going to keep that humor to a minimum, because it’ll be a chore to watch all of it again during editing), the band and orchestra begin the first part of the evening with ‘Truth’, followed by ‘Stormbending’. Both songs, which are already bombastic by nature, benefit greatly from the presence of the orchestra. But it’s a shame the choir can’t be heard at all, a problem that persists throughout the entire set. The orchestra itself suffers from the same problem at multiple points throughout the set, but at least they have moments where they are coming through the mix quite clearly. Based on comments heard after the show and several live videos found online, the orchestra’s sound varied greatly based on people’s position in the theatre. It’s the only blemish on a great set.

With a discography as rich as Devin Townsend’s, you are always going to miss out on songs you really want to hear. Tonight, live staples are played together with songs that are barely played live, or in some cases never played before. After ‘Stormbending’, the band plays the full version of ‘OM’ found on the Christeen EP, a song that previously has only been played in a shortened version. ‘Failure’ and ‘Higher’ are the only other two songs played from Transcendence next to ‘Stormbending’.

Ziltoid comes to Plovdiv in the form of ‘By Your Command’, and by the time the band is working their way to the impressive climax of the song, the orchestra has stopped playing and are all slightly turned towards the band, silently watching them play. It’s a beautiful sign of respect, respect they get back from both the audience and the band. Devin thanks them multiple times and playfully messes with Levon, slowly creeping up to him from behind at several times, and at one point giving him a slight kiss on the shoulder.

Synchestra is represented by ‘Gaia’ and ‘A Simple Lullaby’ later on in the set, the latter ending with literal fireworks, which was “the entire budget for the next album”, according to Devin. After the always emotional ‘Deadhead’ gets a standing ovation, the audience sits back down to listen to the rarely played ‘Canada’ from Terria, one of the many highlights this night. This time the audience stay on their feet after another standing ovation: ‘Bad Devil’ unleashes a dance party on the steep steps and seats of the ancient theatre. It’s a dangerous, but phenomenal sight. It’s during this song that the orchestra is also coming through clearly, which greatly adds to the atmosphere of the song.

With the first part of this evening slowly reaching its end with ‘Higher’ and ‘A Simple Lullaby’, the mellow and emotional ‘Deep Peace’ has everyone dead silent. The venue slowly becomes illuminated by people using the flashlight on their phones. It’s an overwhelming ending to the ‘by request’ set and I find myself wiping away tears and silently staring down at my feet for a couple of minutes. 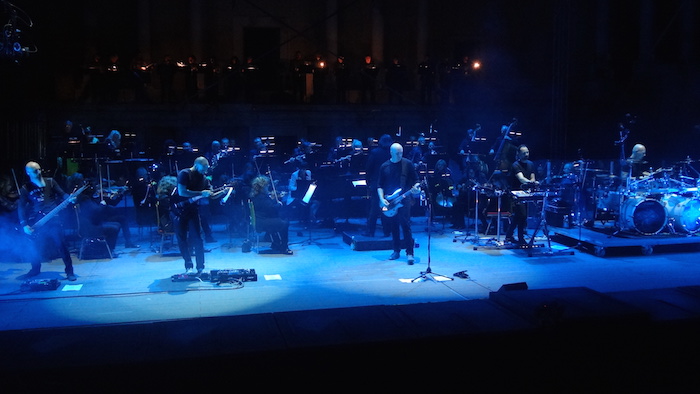 After a 20-minute break, Devin comes back on stage to introduce the band for the second part of the evening: a full play-through of Ocean Machine. While the full play-through itself will not be a first for the band, having done so twice earlier this year, it is the first time ever recording bassist John Randahl ‘Squid’ Harder will be playing live with Devin.

As soon as everyone has taken their place on stage and the speech from ‘Seventh Wave’ marks the beginning of the Ocean Machine set, a silence falls over the crowd, only interrupted by applause and people singing along with the band. True to his word, Devin has kept the joking to a minimum during the ‘by request’, though he would not be Devin if he did not make a couple of jokes. But for this part of the show the jokes are completely absent. And apart from the occasional introduction to a song – ‘Night’ is dedicated to the late Marty Chapman, the drummer on Ocean Machine – Devin keeps the audience interaction very limited, it’s the music that does the talking. From the pumping rhythms of songs like ‘Life’, ‘Hide Nowhere’ and ‘Regulator’ that had enthusiastic audience participation, to the more introspective and intimate pieces like the trilogy of ‘Sister, ‘3 A.M.’ and ‘Voices in the Fan’ – where the choral outro sounds right at home in the ancient theatre – which has the audience silent and captivated, Ocean Machine proves to have stood the test of time.

‘Funeral’ sends a collective chill down the spine of the audience with its slow progression towards an emotional climax. It’s a visibly hard song for Devin to get through, the lyrics dealing with the death of a schoolmate, who was killed in a robbery. The seamless transition into ‘Bastard’ sees more and more people in the audience rising to their feet, and by the time ‘The Death of Music’ is played, we are completely enraptured. This trilogy of songs is one of the greatest 30 minutes of music on record, and live it surpasses the quality of the studio versions with ease. The cold air of Plovdiv is starting to take its’ toll on Devin’s voice (and Ryan van Poederooyen’s drumming, who played through cramps for large parts of the evening), and there’s an audible struggle in getting the final screams of ‘The Death of Music’ out, but at the same time it adds to the raw of emotion of the entire song.

After this wave of emotion, the calm ‘Thing Beyond Things’ brings everyone back to earth, its simple structure offering a breath of air for those who had it taken away…only for it to be taken away again at the end of the song – and the evening itself – with that final gut-wrenching scream that goes on longer than you would expect, given the amount of strain on Devin’s voice from the entire evening. It’s a scream that must have woken everyone up in the centre of Plovdiv. 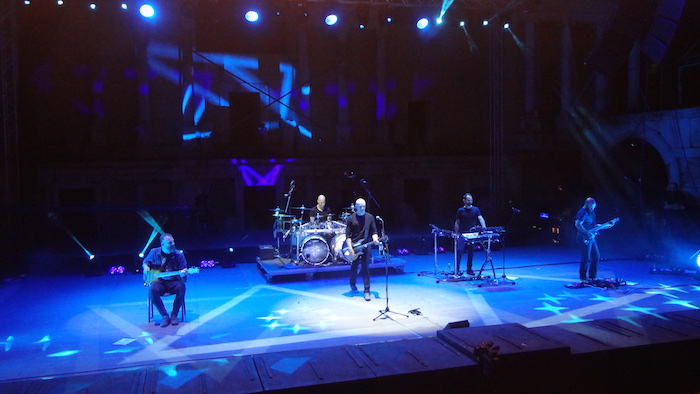