Trending
You are at:Home»Reports»Live Review: Ghostfest Festival 2015
By Joshua Hall on September 16, 2015 Reports

Hardcore is an odd genre of music. The suffix ‘core’ seems to be applied to many heavy areas of music nowadays, although is not necessarily a bad thing. The eclecticism and diversity of modern day heavy bands means there’s a fantastic range of bands to immerse yourself in, and Ghostfest, celebrating its 10th birthday, attempted to do that. With a good few bands I was excited to see [as highlighted in my preview], and the atmosphere -despite its monochrome dress code (the amount of teens and young adults dressed in similar outfits was outstanding) – was certainly energetic. I was expecting a fun day; with three stages and plenty of bands, there was a lot to look forward to.

The first band of the day was Baltimore-based hardcore punks Angel Du$t, one of the acts I was most looking forward to. Bringing in a decent crowd this early in proceedings, and playing tracks from both their debut 2013 EP and their latest 2014 LP A.D., they played a fast, cathartic set that leapt from song to song. Taking little moments to thank the crowd (“I don’t usually get up for another two hours,” claimed vocalist Justice Tripp), and even starting a little pit, Ghostfest couldn’t have asked for a better band to start the day off. With a drummer that bore resemblance to the late Beastie Boys’ MCA, and a vocalist who got the crowd singing along with ease, Angel Du$t were a fantastic, humble band whose expertise at their genre set a high bar for the later bands to meet. They also gave me a free copy of their CD, which was a lovely gesture.

However, once I stepped out of the Mine stage, and on towards the Pulse stage to see South Wales’ emo/post-hardcore outfit Casey, things were less hit and more miss. Due to their clash with local Leeds band Malevolence, only a small party of people were at their set. The vocalist vaulted over the barrier, creating a more intimate feel, and when the set started with atmospheric guitars and a soft, slow build-up, it was looking promising. From here on though, Casey’s set was ultimately disappointing. Blame mostly falls on the terrible sound (vocals inaudible, guitars mixed badly, and a poor bass sound), which ruined the listening experience. Moreover, they only played a 20-minute set, which dragged despite its brevity. However, those familiar with Casey’s music enjoyed their bigger tracks with much more gusto – ‘Fade’ went down extremely well, for instance. It wasn’t a bad set per se, just disappointing.

Next was Blood Youth, a band I interviewed that same day. The band, borrowing most its members from the now-defunct Climates, rocked up onstage masked in feedback and confident expressions, straight into playing several tracks off their EP, as well as dishing out some new songs. With a tight and focused sound, the Lincoln based post-hardcore rockers delivered a solid 25-minute set, ensuring the audience were just as entertained as themselves. An energetic performance, with plenty of people at the barrier screaming the words, Blood Youth’s set was an enjoyable, spirited parade of hardcore music. A use of backing tracks added a dynamic shift between the occasionally tedious breakdowns, and ‘Failure’ had everyone singing along, with vocalist Kaya Tarsus jumping over the barrier and the audience shouting every word. 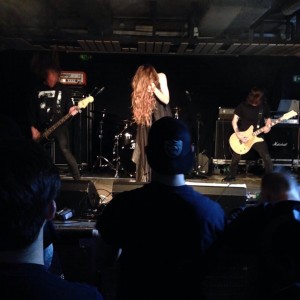 Oathbreaker were up next, and being one of the bands I was most looking forward to, I couldn’t wait to see what they would bring to the festival. Said to put on fantastical live performances, owning a profound and uniquely exciting stage presence, what the band delivered through their thirty minute set ticked all those boxes. Although suited to a much larger stage, where they could have done more with the ability to use more lights and create a more mesmeric atmosphere (the lights were static throughout their performance), the Church of Ra artist still offered an impactful, flawless set (on the smaller Mine stage) with only the occasional wordless break to muster the heaviness of their sound. With a stage presence of hair-covered faces, a frontwoman whose voice ranged from angelic whispers to shuddering screams, and a unique mixture of black metal, hardcore and doom, Oathbreaker proved themselves to be much bigger than the stage provided.

Then was the turn of hardcore favourites Turnstile. Bringing the late 80s/early 90s hardcore sound back, with tints to The Real Thing-era Faith No More crossed with the likes of Bad Brains, they offered an unforgettable performance. With fast, quintessential hardcore chaos, huge pits, plenty of crowd surfing, and massive party vibes, the 5-piece wowed a packed-out main-stage, as the vocalist ran from side-to-side, giving the crowd opportunities to scream down the mic, and generally just getting everyone dancing – Turnstile were simply a pleasure to watch.

After this, problems started to pursue. I was hungry, and wanted to get some air for a while. So I walked to the exit and saw a sign that explicitly said NO RE-ENTRY. No walking into town to grab a coffee, instead I had to remain in the student union until the final performance. And with all the moshed-out, sweaty hardcore fans piling up the walls of Leeds University’s Student Union, it was irritating to pay over-extortionate prices on food with no opportunity to take a break from the onslaught of musical heaviness. A poor move from the organisers, there were many complaints from the festival-goers, and as the day went on it became quieter and quieter, with a notable amount of people leaving early. 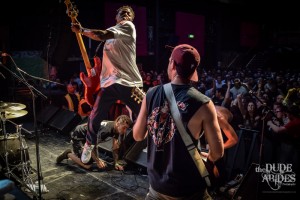 And after an uninspired set of subdrops from Continents, more disappointment came from progressive-metal/djent band Born of Osiris. They’re a band whose studio sounds have been amazing lovers of technical metal since 2009, so it was a shame their live set at Ghostfest flunked so badly. Despite an energetic performance, with vocalist Ronnie Canizaro showing plenty of drive in trying to push the audience to enjoy themselves, it was unfortunate that the majority of people were unmoved for their set. Perhaps it was due to their placement in the day (it was just before 5pm), or due to the intensity of Turnstile’s set making everyone fatigued. The songs that did get people moving only got people dancing for a short period, before everyone settled back into a state of comfort again. A confusing set, it was a shame to see such a talented band so neglected by their audience.

I then jumped between a few bands. Slaughter to Prevail stick out in memory: filled with the lowest growls I’ve ever heard, the Russian slam/deathcore band delivering a terrifying, distinctive performance, whose ability at being cathartic was second to none. The vocals themselves were incredible in a near-inhuman manner, but musically they left little of an impression. With repetition without pay-off, and a sound that was so chaotic and heavy it sounded cheesy, I personally found the band to be too niche to be enjoyable. I also saw Despised Icon later in the day, but a 30-minute delay due to kick-drum problems meant a restless crowd (and not necessarily in a good way) by the time they hit the stage.

And from here on in I just found it difficult to engage. I understand that Ghostfest is marketed towards the hardcore folk; and don’t get me wrong, there’s a lot of hardcore I really like. There was a nice variety of acts, but being barred from leaving the building, plus the fact that the latter bands were all lacking dynamics in volume, and that people were leaving early, it all seemed to equate to a festival that had lost most of the buzz it had in the first few hours. Case in point, later in the day I saw Crime In Stereo, a band marketed as being hardcore punk, but came off as being more pop-punk. When I saw them, however, there was a low turnout, people were leaving throughout the set, and one guy to the left of me was fast asleep. The band’s performance itself was also not particularly good, with the vocalist being flat and the sound generally terrible. It could have been excused for being in a small room, but Oathbreaker, who shared the same stage earlier in the day, sounded infinitely better. The inconsistency of the performances was definitely one of the main factors that made Ghostfest a disappointment. And even when headliners Hatebreed took the stage, people weren’t half as pumped as they could have been. Despite a top quality performance (which arguably went on for slightly too long), myself and many others were too fed up of the familiar surroundings, the sweaty atmosphere and the weak turnout.

All in all, Ghostfest could’ve been so much more. City festivals are good fun; I’ve been to Hit The Deck and Tramlines and had an absolute blast at both of them. I understand that I’m not a number one hardcore fanboy, and that Ghostfest may not be explicitly aimed at me, but for those who wanted to delve a bit deeper into the world of hardcore – or someone who likes diversity in music – I found it increasingly difficult throughout the day to truly enjoy myself. It’s a shame that a festival with such a varied line-up gave such a mixed outcome. I would say here’s to next year improving, but the Ghostfest team have said there will be no next year, and possibly no more ever.[1] It’s all rather disappointing really.

Footnote:
1. Facebook post: “This is the last Ghostfest for some time in the UK.. maybe the last one ever.” 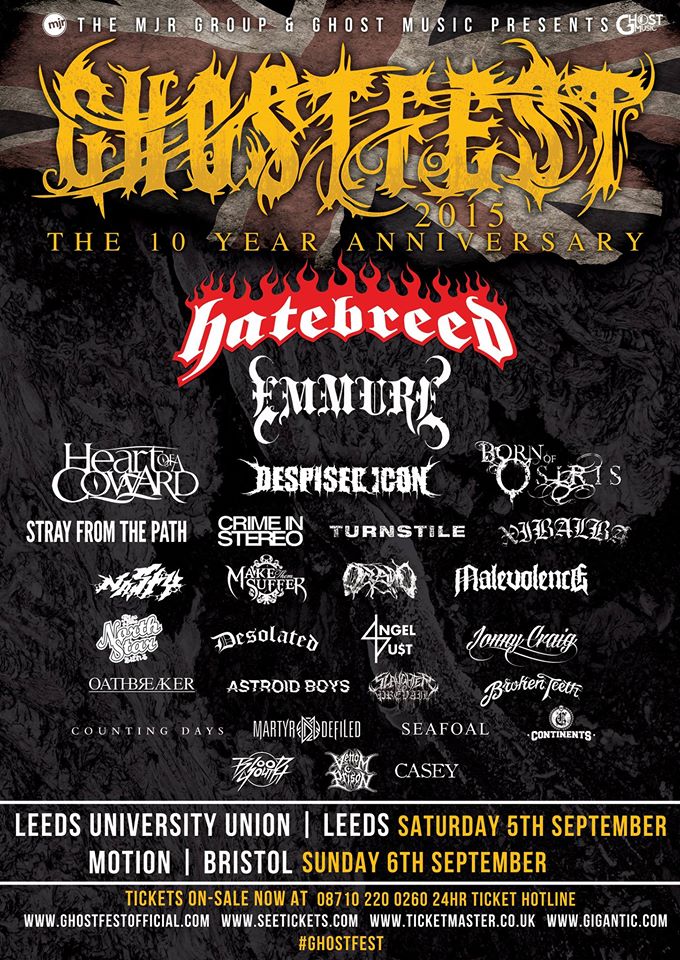 Note: Emmure did not play due to flight issues.