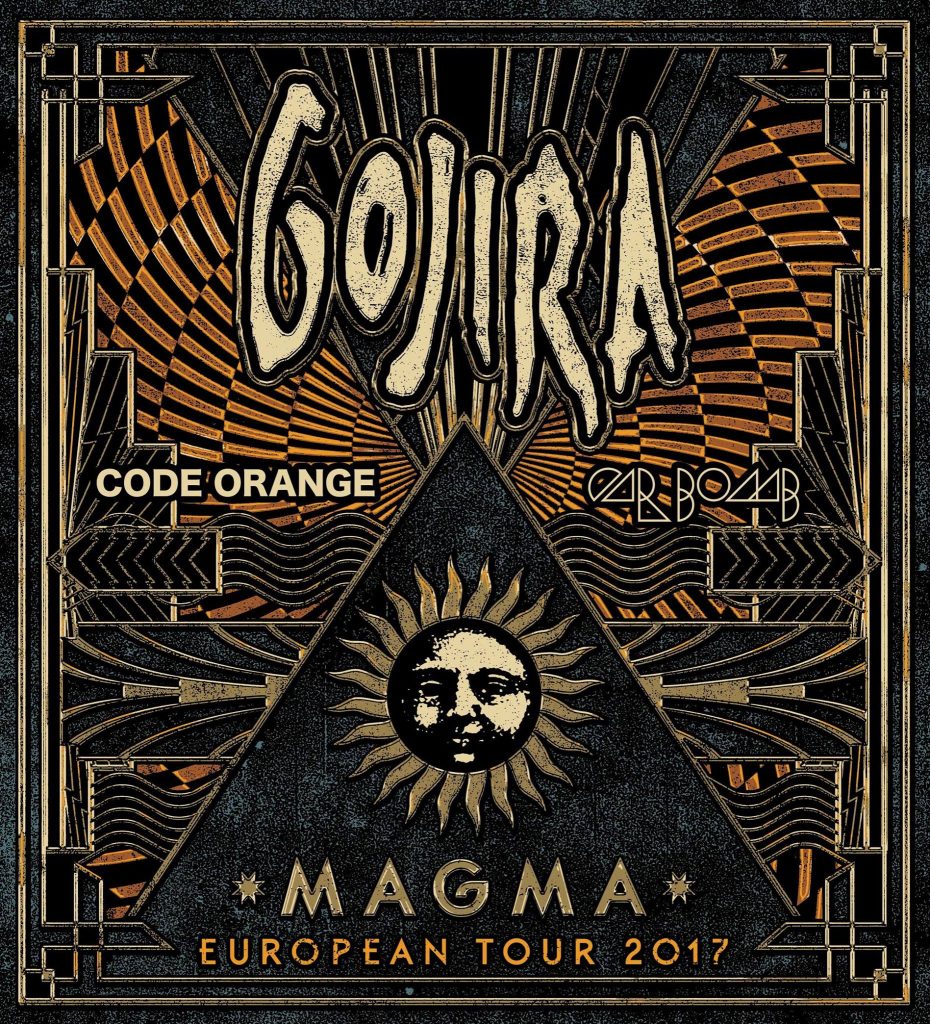 Gojira‘s headline UK & EU tour may have left the UK, but with Car Bomb and Code Orange in tow, fans should know that they will put on one hell of a show no matter where you see them. Each of the bands present a kind of thundering heaviness that you’d be hard pressed to find elsewhere, threading a weave of caustic and bombastic metal between them that makes for a unique, but highly entertaining night. 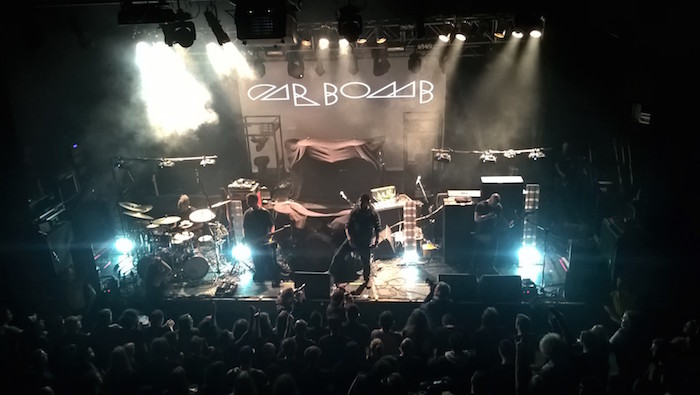 Car Bomb opened the night, and they left many people with headaches in the morning. If you haven’t heard Car Bomb before, their brand of metal is as intense as it is confusing. At times it sounds like Meshuggah’s slow cousin, with vastly heavy, slow, chunky riffs played to strange time signatures. Car Bomb is extreme, technical metal that incorporates elements of mathcore, but is much unlike anything you have ever heard. Speaking to Broken Amp, Greg Kubacki explained that Car Bomb are an intentionally experimental, disorienting band:

“I never really know how someone will perceive a song, so there’s always a sort of risk that I take with my writing. To me, that is the most exciting and the most important part of making art. If you’re not taking chances, you’re not doing it right.” Greg Kubacki, interviewed here.

What this experimentation brings is something mystifyingly heavy; Car Bomb are a brutal band, and their show was equally as destructive as their music. Disconcerting strobe lights flashed across the stage as they performed tracks from their 17-year career. Watching Car Bomb was a unique experience, their caustic approach to music and performance making for an foreboding, intense, but supremely awesome opening half hour. Michael Dafferner’s angry screamed vocals and clean singing were great live, coming across better than they do on CD. Indeed, Car Bomb comes across better live in all areas. You get a good appreciation of the band’s technical, complicated style live. Greg Kubacki’s riffs shook the floor, and from the looks of it, people’s minds. Car Bomb will leave this tour with more fans thanks to their unexpectedly brutal sound. The experimental, but brutally heavy sounds of Car Bomb supplemented the mighty Gojira, too, which is no surprise considering the two bands are close friends and have been touring together for years. 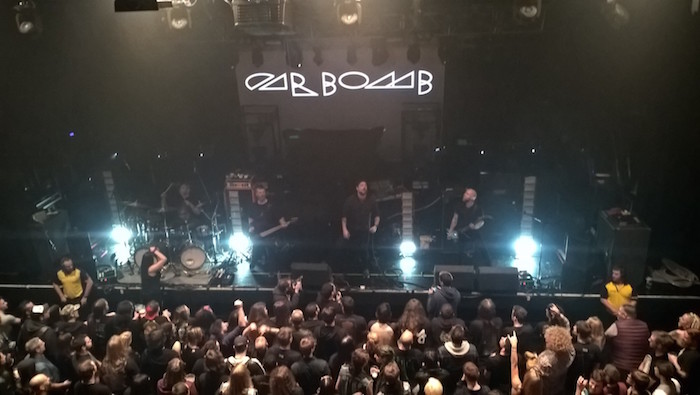 Following the powerful and surreal sounds of Car Bomb would have been difficult for anybody, but Code Orange rode the wave of intensity well. Code Orange are a little bonkers themselves, with a sound that takes the likes of All That Remains, Dillinger Escape Plan and Slayer and mushes them together. The disparity between styles worked against Code Orange unfortunately. It was impossible to pin the band down, with a couple of their softer tracks, with clean vocals performed by Reba Meyers going down like a lead balloon compared to their standard, heavier songs, and the crowd noticeably dropping in excitement and involvement. They were at their best when the music was heavy, hardcore stuff. The three vocalists performed admirably in the heavier tracks, but the main vocal duties for the night came from the duo of Jami Morgan on drums and Eric Balderose on guitar. When all three vocalists were involved, Code Orange were at their best.

Code Orange didn’t have much trouble getting the crowd ready for Gojira, and despite one or two weaker tracks, the audience was more than willing to start mosh pits and crowd surfing when the band turned proceedings up to eleven. Perhaps Code Orange should have opened the night instead of Car Bomb, whose sound can be more closely affiliated with Gojira’s. Although feeling like the weak link of the three bands on the night, Code Orange put on a decent show, with the energetic performances of all involved helping everyone to have a good time.

There was no question that Gojira put on the best show of the night. Playing a solid mixture of old and new – leaning towards their incredible 2016 record Magma, Gojira were brilliant from the first note played, right up until the last. They were in awe of the amount of people who turned up to watch them, claiming that the sell-out crowd was 1600-strong. This was a big deal for Gojira, who many moons ago, failed to play in Bristol after their show was cancelled due to pre-sales of only four tickets, something they were keen to point out to the eager crowd. Brothers Joe and Mario Duplantier and the gang were in a great, talkative mood throughout, and played with beaming smiles on their faces.

The band was great with the crowd, interacting far more than they did when they played Download Festival last year. For instance, after the first couple of songs, Mario Duplantier broke one of his bass pedals. This resulted in him addressing the crowd, telling us that he had “lost a friend”; he “had that bass pedal since 1999.” He didn’t get much sympathy from his brother, who swiftly told him to “get over it.” Luckily, they had a spare bass pedal, and considering the abuse that thing got, it’s amazing it lasted as long as it did. It was a funny exchange between the band and highlighted that they were all having as good a time as the crowd – a point they brought up upon the show’s conclusion. 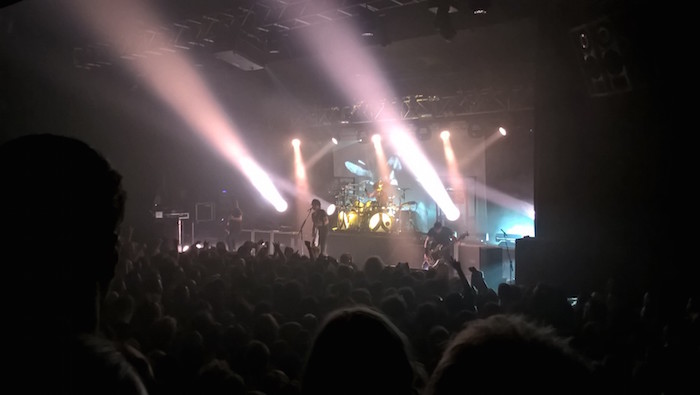 Fan favourites such as ‘Silvera’, ‘Flying Whales’ and ‘Oroborus’ really got the crowd going, with many singing along to the whole song. With Gojira you always get more than just a skilled, great musical performance. They put on a great visual show too. Their light show was mesmerising, for example, and it was backed up with a big screen behind the band that played videos throughout, akin to what Porcupine Tree used to do. On top of the great visual show, Gojira sounded excellent, each member played their part perfectly and with enthusiasm. The real stars of the show however had to be the Duplantier brothers, who both played an insane solo each. Watching Gojira live is a treat.

If you’re lucky enough to have got hold of a ticket for any of their upcoming shows in Europe or even in the USA (this show in Bristol was sold out), then you’re in for a great night of metal that covers a wide array of subgenres. Despite Code Orange feeling like something of a let-down compared to the brutally heavy and intense Car Bomb, you’re sure to have a good time, and Gojira are worth the price of admission alone. 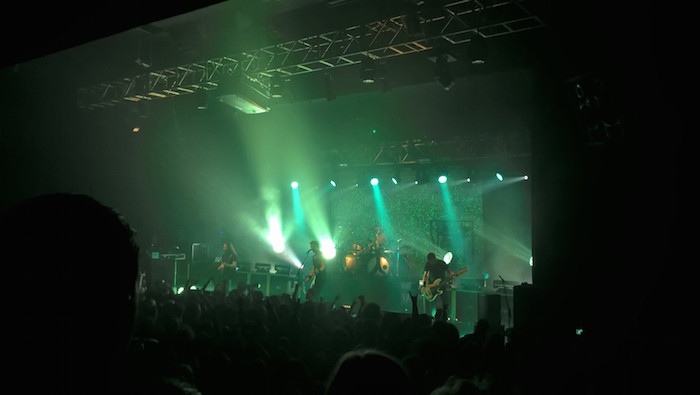 For further reading, check out our interview with Greg of Car Bomb, and our review of Code Orange’s Forever.