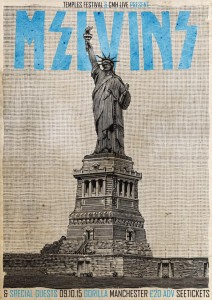 Everything in the Melvins charm is perfectly encapsulated at this sold out, intimate gig at Manchester’s Gorilla: their notorious slow-and-low riffs, loud dynamics and genre-bending experimentation are as present as their idiosyncratic, bizarre humour which has leaked into their music and stage personas for over thirty years. They are not only sludge metal pioneers, but often regarded as the predecessors of the grunge sound which exploded onto the alternative music scene in the early nineties. This is reflected in the array of diverse attendees, sporting their favourite heavy metal or alt-rock merchandise. Onstage, donning peculiar outfits, is a line-up consisting of two percussionists, a bassist and a frontman with the most dazzlingly shiny metallic guitar you’ve ever seen, the Melvins play ninety minutes of their unique genre-traversing metal to seven-hundred passionate fans.

Big Business are the only support band for this gig, a bass and drum duo who make up half of the rhythm section of the Melvins, who are playing with two drummers for this night and the entirety of their tour.[1] The Seattle group deliver a tremendous set to an already packed audience, mostly consisting of tracks from their 2013 album Battlefields Forever. The sole bass guitar meant riffs were body-shakingly heavy, darting about through tribal drum intricacies; it becomes easy to appreciate the initial Melvins comparisons they received, and why Buzz recruited them in the first place. The crowd react well, with many spectators singing along and pumping their fists to certain parts of the set. Judging by the crammed venue, everyone is here for both bands; the two names have become inseparable in recent years.

There is a sense of excitement as cheers and whistles erupt from all corners of the room when the Melvins take to the stage over a chopped-up PA version of Black Sabbath’s ‘Sweet Leaf’. Frontman and guitarist Buzz Osbourne is dressed hilariously, wearing a tunic with eyeball art plastered all over and his signature mushroom-cloud hair swaying to and fro. They launch into recent track ‘Onions Make the Milk Taste Bad’; King Buzzo’s distinctive fuzz-heavy guitar tone shines through with clarity to the captivated audience, who nod heavily in time with the dense riffs. The overall sound is extremely loud and bass-heavy, the drums tuned low and dense yet never turning into a muddy dirge, with four-part vocal harmonies ascending above the thick resonances of the deafening four-piece. 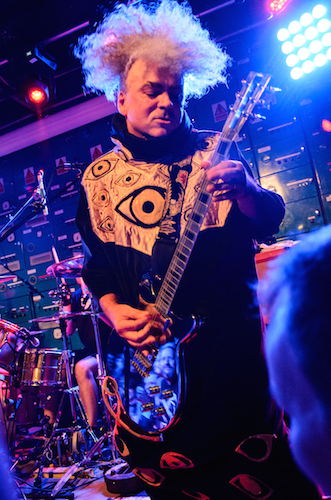 The dual drum attack of Dale Crover and Coady Willis combines seamlessly: always perfect rhythmically, every hit creating a mesmerising effect, they were the focal point of the show without being overly disruptive. When the pair diverge from parallel percussion theatrics, they provide drumming that play to their individual strengths: Crover serves up sparse, hard-hitting fills and Willis delivers the complexities. The sound becomes congruous, deviating only when deliberate discordance is applied, such as creating cacophonies of noise with arrhythmical drum solos to end songs. The two drummers’ tactic is exceptionally entertaining, well-executed and theatrical without pretension, descriptions that could also summarise the Melvins in general. They perform with no backdrop, minimal stage lighting and on a low, barrier-less stage, never conforming to the usual stage presences of the hardcore punk genre that spawned them (the band members even tell a crowd diver to “get off the stage” whilst they perform).

Halfway through the set, the crowd starts to get markedly more energetic thanks to reactions to a string of fan favourites. ‘It’s Shoved’ from the much-loved Bullhead prompts liveliness due to its easily distinguishable introduction, and the crowd hold up in vigour until the end of a pinnacle moment in the set; the high-tempo, stoner rock stomp of ‘Sweet Willy Rollbar’.

Well-known for their covers which often express their wide array of influences, [2] Melvins play a lively version of ‘Youth of America’ by cult post-punk group Wipers, prompting a second wave of audience participation after the crowd surfing/diving at the heart of their set. ‘Your Blessened’ follows, one of the sludgiest portions of the night and another certain highpoint. 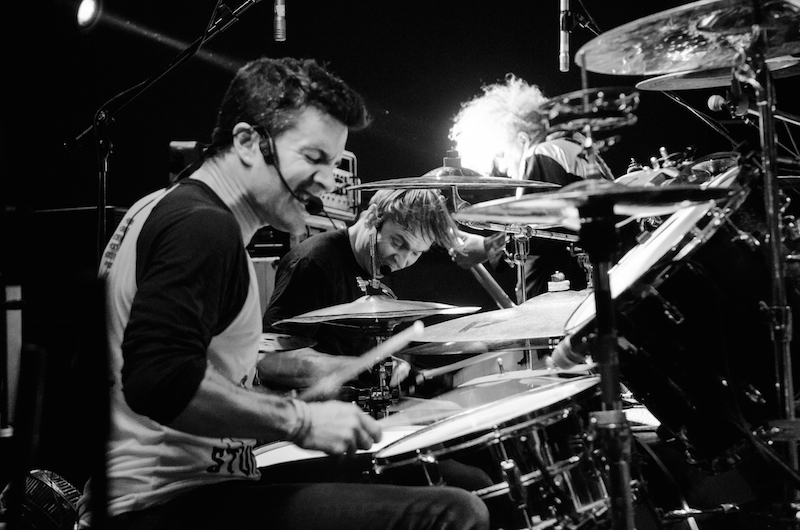 However, the climax of the evening has to be the track ‘A History of Bad Men’. Delivered as the end of the trilogy of masterworks to conclude the performance, it perfectly demonstrates the Melvins and Big Business’ ability to fluidly interlock as a band, especially in the soaring harmonies and percussive refrains; they are a whole collective and not just a sum of two parts. The band exit the stage to an onslaught of feedback, Osbourne’s guitar propped on his amp whilst Jarred Warren hands his bass to an audience member in order to perform a brief noise section, toying with effects pedals to form otherworldly blares, chanting illogical ramblings into the microphone.

Tonight is a hugely entertaining performance, which delivers the manifesto for everything the Melvins and Big Business embody. The audience leave extremely contented, excitedly discussing their favourite segments of the night. The solitary gripe which could be stated that evening was no material from Lysol or Houdini is played, but this is understandable from a band with 20 studio albums, who abstain from adhering to “greatest hit set” formulae.

Luckily, the Melvins and their partners in crime don’t seem to be going anywhere in the near future, but that doesn’t mean you should miss out on seeing them live next time they’re in town. 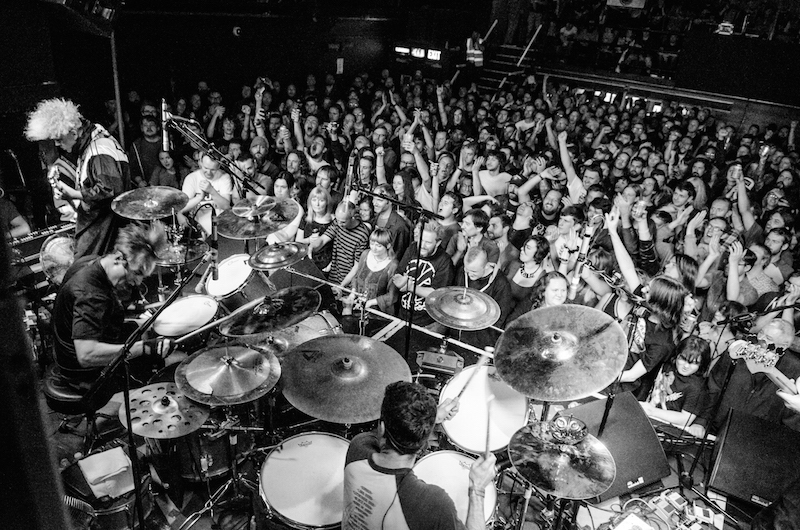 Footnotes:
1. The pairing initially occurred when the groups joined forces for 2006 album (A) Senile Animal. Big Business have featured as part of the Melvins on this world tour and many tours of the past. The Melvins required a bass player so looked into Jarred Warren but decided to recruit both members of Big Business and thus formed a four-piece with two drummers. Buzz Osbourne stated that it was “the best decision they ever made.” (Source: “Treasure Chest: An Intimate Portrait of a Life in Rock: King Buzzo”. Kerrang! Magazine (1214): 60. 14 June 2008.)

2. Think versions of Kiss and Alice Cooper and polar opposite artists such as The Germs and Black Flag. The Melvins have an extensive list of information on their website, including all the covers they’ve ever performed live or on record http://www.themelvins.net/covered.html