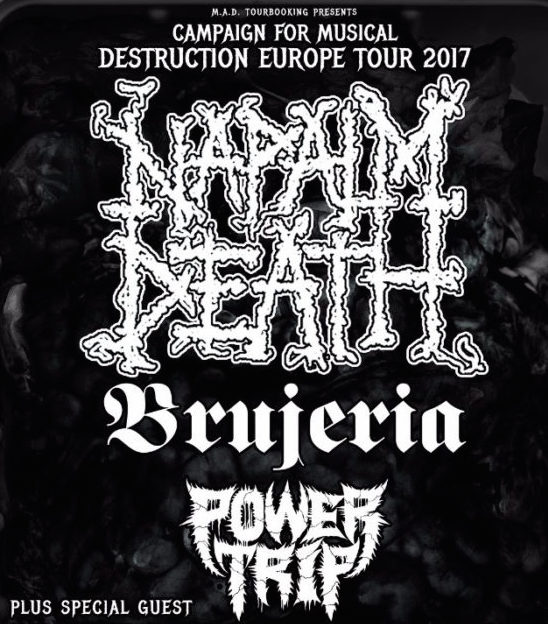 This absurdly strong line-up has been travelling Europe for the past month with their ‘Campaign For Musical Destruction’ tour, and Geneva was one of the last stops. Bassist Shane Embury is having a particularly gruelling tour, playing 3 out of 4 sets each night as the bassist for Napalm Death, Brujeria and Lock Up. But despite his huge responsibilities he is showing no signs of flagging on stage; in fact his appearances give a strong sense of cohesiveness to proceedings. And despite the atmosphere of convivial positivity tonight, anyone who ever thought metal was apolitical or escapist would have been soundly proven wrong. All four bands made political statements tonight, both musically and in their addresses to a young and motivated crowd.

Lock Up were on first, which seems crazy for a super-group, but the venue filled up quickly and they created a great atmosphere. Lock Up were formed in 1998 as a side project for Shane Embury, Nicholas Barker (Cradle of Filth, Dimmu Borgir) and Jesse Pintado (Napalm Death, Terrorizer). Members of bands such as At the Gates and Hypocrisy have also passed through Lock Up, but the current line-up is Shane, Nicholas, Anton Reisenegger (Chile’s Pentagram) on guitar and Kevin Sharp (Brutal Truth) as vocalist. Lock Up are known for high-order deathgrind and released their fourth album in March of this year, but have played few live shows, so this was a real treat.

They exuded musical competence, the pleasure of highly experienced musicians playing together, combined with innate brutality. Kevin Sharp had lots of interaction with the crowd, making everyone feel involved and sharing personal stories. “Grindcore is a lifestyle man, you gotta commit!” In fact Sharp was a visible presence at L’Usine throughout the night, manning the T-shirt stand most of the evening and making lots of friends. Lock Up gave us a short retrospective of their work, with plenty of tracks from their new album Demonization, and ending with one of their earliest – ‘After Life In Purgatory’. An excellent start to the evening.

The young Texan band Power Trip were up next, and it was fantastic to see a new group coming through playing such good quality thrash. Their riffs are extremely old-school thrash, technically excellent, with unrelenting sixteenths and the rhythm guitar very high in the mix. Their fast and chunky riffs are infectious and had the whole crowd dancing – it was impossible not to, especially with vocalist Riley Gale throwing himself around the stage.

But just in case this sounds like a party – Power Trip were angry. Riley Gale railed against Trump, he quoted Foucault (in ‘Conditioned To Death’), and had a murderous facial expression throughout. The set ended with the whole crowd chanting ‘Crossbreaker’; although I am slightly biased as a huge thrash fan, I was absolutely hooked by this group and can’t wait to see them perform again.

Behind their masks, Mexico’s Brujeria looked rather familiar; and that’s because they were exactly the same musicians as Lock Up. But despite the same musical line-up, the sound and vibe was very different – more groove less grind, and in any case Brujeria is all about the dual vocal performance of John Lepe and Pinche Peach. Nobody could accuse Brujeria of taking themselves seriously, with their cartoon-ish drug lord image, replete with props including masks, toy swords, banners and comedic gestures.

This was my least favourite set of the evening – and when Brujeria is the weakest band you know you’re in high quality company. I felt the vocals were a little messy and uncontrolled, which contrasted poorly with the musicianship around them. However, there’s no denying that the crowd loved it, and there was a huge amount of stage diving. Brujeria are all about audience participation- many of their songs have moves for us to copy, they held up signs for us to chant, and there was lots of banter although it was all in Spanish. Most of the set consisted of their old favourites, but from the most recent album they of course performed ‘Viva Presidente Trump’, exhorting the crowd to chant ‘Fuck President Trump’.

Brujeria ended with their own version of the ‘Macarena’ (‘Marijuana’), and I was dangerously close to the front when they called for ‘Girls to come and dance on the stage’. But fortunately I avoided eye contact and thus ending my metal career by being dragged up to do the Macarena on stage at a grindcore gig.

Appearing at this venue for “about the 20th fucking time” (according to vocalist Barney Greenway) Napalm Death have already received rave reviews for their performances on this tour, and there is perhaps little I can add to what has already been said – they were sublime as always.

Beginning with the ominous intro ‘Apex Predator’, they launched into a retrospective of their career, with plenty of tracks from their latest album interwoven. There was enough sonic variety to dispel any myths that grindcore is homogenous. L’Usine’s sound system allowed the riffs to ring out clearly, which is exactly what I wanted after last seeing Napalm Death at Download 2016 where the weather conditions completely drowned the sound. But although they were precise, it never felt workmanlike because of the extraordinary passion that Barney puts into his performances. It is an absolute joy to watch him cavorting about the stage – his energy is incredible and every single vocal is given with 100% commitment. Despite an overwhelmingly positive atmosphere, with lots of crowd banter, Napalm Death are as political as ever. Barney’s energy is completely undiluted and he gave us snippets of political commentary between songs, railing against modern slavery, urban poverty and women’s rights.

The short explosions of power were sometimes too short – I looked away for a moment and missed ‘You Suffer’- “Concentrate!” joked Barney to the crowd. By now the pit was in full flow, beer was flying, bodies were flying, people were launching themselves off the stage one after the other. As a small woman alone I decided to stay on the edge of proceedings, but I loved watching that cathartic tangle of energy which at no point feels threatening.

L’Usine is rapidly becoming my favourite metal venue, and all the names are passing through this year. There’s great sound quality, impeccable entry procedures and crowd control, and even when the pit is heaving you still feel safe and close to your favourite band. So many highlights tonight, but the night belonged to Shane Embury.