Trending
You are at:Home»Reports»Live Review: Oathbreaker & Svalbard at The Brudenell – January 26th 2017
By Tom Woodward-Massey on February 10, 2017 Reports

It isn’t often that a group is so difficult to pinpoint as Oathbreaker. The group from Ghent, Belgium alter their musical formula with each record, encompassing influences from every corner of the extreme music realm. A blend of black, sludge and post-metal with crust, hardcore punk and shoegaze – merely describing Oathbreaker to friends can be a bit tricky. Following a set of blistering post-hardcore from the exceptionally selected support group Svalbard, Oathbreaker deliver a seamless performance which mainly consists of material from their most recent critically acclaimed album Rheia to a crowd of excited spectators at Leeds’ Brudenell Social Club Games Room.

With the Games Room already brimming with fans and curious onlookers, the sole support act Svalbard take to the stage, playing an interesting take on post-hardcore with flourishes of black metal guitar work, post-rock atmospheres and metalcore belligerence. The crowd react with enthusiastic applause following each song, especially after set highlight ‘Disparity’ which features an immediately memorable melodic intro and irresistible riffs throughout. The band appear to be relishing the moment; they’re grinning from ear to ear and thanking the audience for coming out early to see them. Guitar and vocal duties are divided between Serena Cherry and Liam Phelan, which enables the audience to focus on each member as they display their respective virtuosity and indulge in stage theatrics (Serena’s windmills are nothing short of mesmerising). Svalbard play a first-rate set which is exceptionally well received by the Leeds audience; it would be no surprise if they expanded their fan base hugely following this UK tour.

It is then the turn of Oathbreaker, who captivate the entire Brudenell crowd as soon as the opening lines to ‘10:56’ are sung. Caro Tanghe sings the introductory track from Rheia in haunting isolation. Wrapped in jet-black clothing from head to toe and shimmying moodily as her spine-tingling vocals grace the silent audience, Caro’s stage presence enthrallingly gives the impression of a theatrical ritualistic act. [1] The band meet her with gradually rising volumes of feedback as they stand next to their huge amplifier stacks and burst into ‘The Second Son of R’, where screams and breakneck instrumentals erupt. The intensity increases even moreso as they weave effortlessly through verse and chorus, ultimately descending into the violently captivating shrieks of the outro.

The juxtaposition of melody, ambience and aggression of the first two tracks set the scene for Oathbreaker’s greatest strength; pairing punishing heaviness with clean vocals and melodic instrumentals, which intensify with each contrasting instance. They demonstrate this throughout their Rheia-centric set, exemplified in set highlights such as ‘Being Able to Feel Nothing’, and the sparse guitar strums, minimal drum reiterations and unnerving vocals in ‘Immortals’. The band do not require overtly elaborate drama to enchant the crowd; their music, stage exhibition and huge album art backdrop strewn with LED lights is more than sufficient tonight.

Oathbreaker’s choice of set list seems cleverly calculated for maximum impact. Arranging the set with Rheia material at the forefront (all but two tracks tonight), the songs run effortlessly into one and other. The first three tracks play out in the sequence featured on record and ‘Where I Live’ logically flows into its sequel, ‘Where I Leave’. Even ‘Needles In Your Skin’ sets the stage perfectly for ‘No Rest for the Weary’, a track from previous album Eros|Anteros due to sharing its black metal-indebted shrieks from Tanghe and intense drum work. Ending with the standout track from their début Maelstrøm, ‘Glimpse of the Unseen’ sends every head in the audience nodding thanks to its sludge metal-influenced groove. 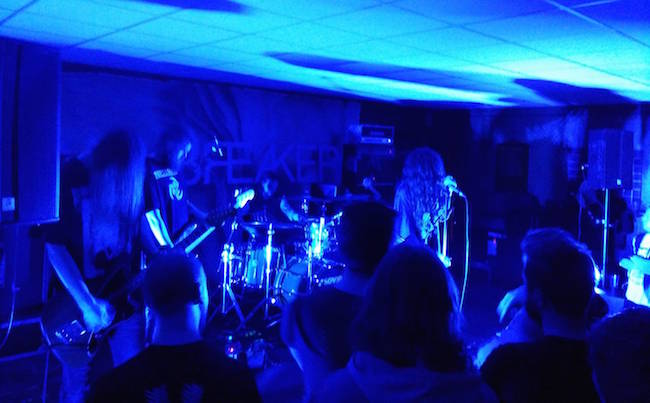 The purpose of an Oathbreaker live show is to invigorate. Heads nod, gazes are fixated on the inimitable Caro Tanghe, and hearts beat in anticipation of each atmospheric crescendo or pummelling dynamic change. New eye-witnesses to the live ritual will be the first to sing their praises. Oathbreaker continue to progress as both performers and musicians, and are simply unmissable in a live setting.

Footnotes:
1. The performances has echoes of the band’s powerful music video for these two songs.