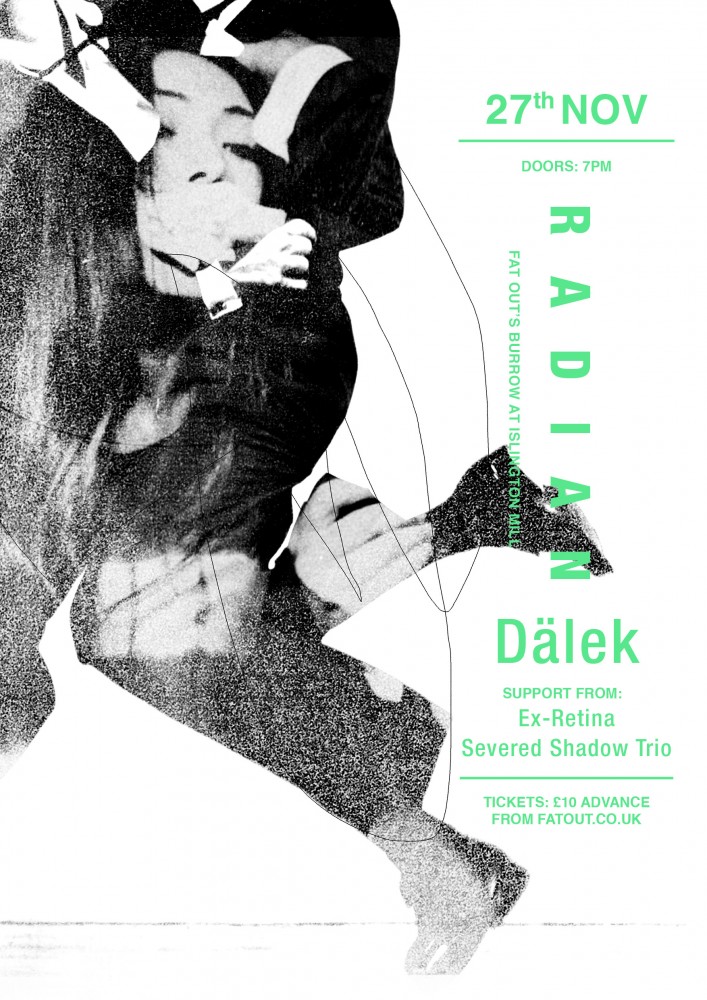 [Note, Severed Shadow Trio had to drop out for personal reasons.]

Just like many DIY venues, Salford’s Islington Mill carries its own individualistic and endearing charm. Its stone walls, dimmed lights, American-style bar and low-set stage provide a place that feels like a house show with class. It’s intimate and engaging, giving music-goers a place where they can drink, chat, and catch some of the best underground experimental outfits. It’s also a place which remains self-defined as a “work in progress; an ever-evolving creative space, arts hub and community.” [1] It’s an exceptionally relaxed and unintimidating atmosphere – anti-capitalist and pro-arts.

Walking into the venue just after doors, I was greeted to a short but sweet set from Hexagon Trail, an experimental concoction of IDM blast beats, noise influence, and dashes of chiptune. Blasting through a set of five interwoven, textured multi-faceted tracks, Hexagon Trail was a welcoming start to an eclectic evening of music.

Shortly after, hip-hop trio Dälek took centre-stage. We’re big fans of the New Jersey-based pioneers (read Tom Woodward-Massey’s piece here), and thankfully they didn’t disappoint with a forty-five minute set of confident, self-assured atmospheric industrial hip-hop. Although Sunday night audiences are a hard crowd to conquer, Dälek got people moving. With live-sampling and on-the-go beat creation, the three-piece shifted through a set of extensive material, from Absence’s ‘Ever Somber’, to Asphalt for Eden’s ‘Guaranteed Struggle’, all the way back to 16-year-old closer ‘Megaton’ – an altered take of Techno Animal’s noisy hip-hop track.

The moments that impressed most were those that shook; a surprising amount of noise was churned through the venue, and although MC Dälek’s vocals often felt buried, the groove and atmosphere more than made up for this, with some of the heaviest, slow-swung, hypnotising beats heard in the rap game. It was just a shame that the crowd was so small, as Dälek’s grasp on experimental – yet completely danceable – hip-hop is not only genre pushing, but wholly entertaining. However, after speaking to MC Dälek about the intimacy and the small spaces he wasn’t concerned, claiming to “love it”, and it being “a lot more fun”.

Honestly, I wasn’t familiar with Austria’s Radian before the show. All that was apparent was the guitarist had an extensive pedalboard collection, the drum set was equipped with tiny bells that masked the drum skins, and the bass was hooked up to an old school Roland. Riding on this somewhat stereotypical math-rock look alone, I was surprised at what greeted me next.

Radian are not an easy band to listen to. They don’t build up massive crescendos and get to a point of celebratory appeasement. There’s not much catchiness or dancing; instead, they soundscape. Using their instruments in the most peculiar ways, the three-piece manipulate their tools in a way that’s as pedantic as the strictest of teachers. Ensuring each slide of the guitar, each use of an effect pedal, and each clasped stroke of a cymbal covered snare drum [2] is used meticulously, Radian experiment with the rock setup in a way I haven’t heard before.

Eyes were kept firmly on Martin Brandlmayr, a drummer whose ability to quickly and unobtrusively stretch drum skins to shift tonalities, and use bells to articulate different percussive techniques, kept a solid groove that never lacked. Enigmatically anticipating what was to come next, the drummer’s unconventional ways brought unusual timbres. Guitarist Martin Siewer was also a force to behold, wielding a Fender Jazzmaster with tripping delay effects and fuzzed aggression. From tapping the whammy in a certain way to get chime-like effects, to slashing the tight strings over the guitar’s bridge and creating pronounced slides with acute attention to detail, it was amazing how such abrasive techniques were used delicately and with nuance. The foundation of all this was bassist John Norman, who although was atypical with his own use of non-standard techniques, grounded the rhythmically diverse duo with undeniable flair.

Although there was a lack of accessibility, it was Radian’s craft of their art that was most impressive. Occasionally, the trio would push to that quintessential post-rock climax, but they rarely rode on these, and were quick to shift somewhere of a different nature. To some, the lack of a big groove could be a barrier; the band not utilizing generic songwriting techniques. But Radian proved themselves as masters of soundscaping, of ensuring ever little detail was not overlooked. It was hard to listen, but rewarding; they proved that experimentation is still alive and well in the rock setup.

Sunday night was an excellent showcase of music. The short-but-sweet selection of material played was gloriously eclectic and exciting. From Hexagon Trail’s blast beats, through Dälek’s industrial soundscapes, to Radian’s experimentation of the rock outfit, Islington Mill provided and served a night of first-rate music.

Footnotes:
1. About Us page for Islington Mill
2. The drummer Martin Brandlmayr put tiny bell-like cymbals on the snare drums to create a pinging – yet clasped – timbre.