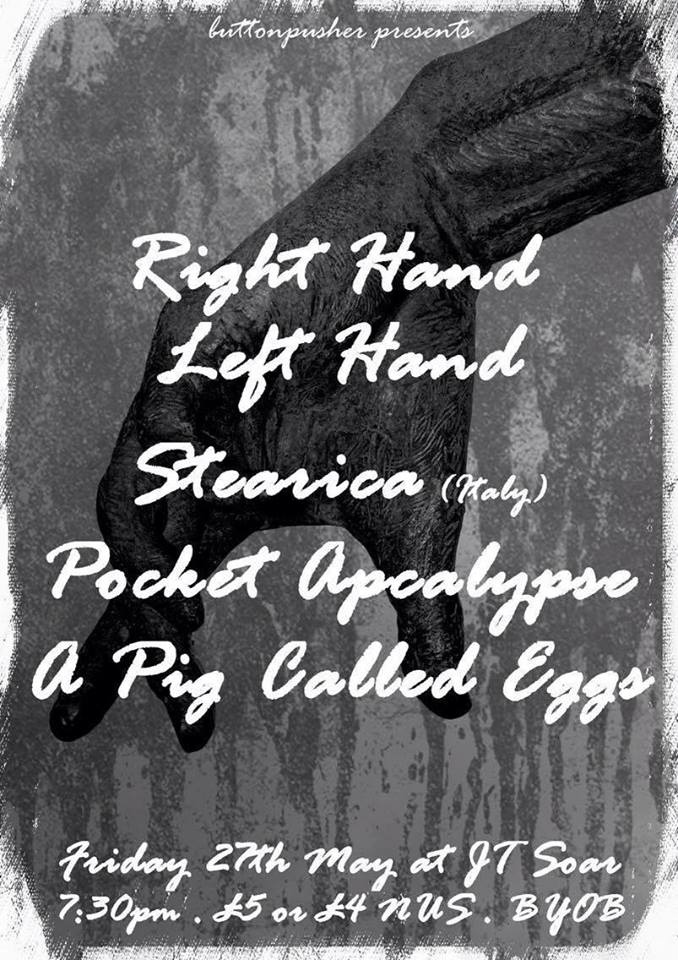 
Nottingham’s JT Soar is one of the UK’s most interesting venues. Formerly a fruit and vegetable house, the now-DIY gig venue and recording studio is a haven for unearthing some of the best new talent.

The gig itself, hosted by Marty Toner from Nottingham-based math-rock trio Alright The Captain, runs alongside the folk at ArcTanGent, helping to shine light upon some of the best left-field rock music. It’s a once-a-month ordeal, inhabiting the moniker Buttonpusher. Previous line-ups have involved such top-brand names Poly-Math, Cleft, Cheap Jazz, Irk and Bear Makes Ninja.

Next up were not-so-aptly named alternative rock quartet Pocket Apocalypse. Delivering a set of confidently written songs, the band never hit the moody dystopia their name implied. Despite standout moments that came specifically from the rhythm section, frontman Nick Jones’ vocals often left a lot to be desired, with some of the falsetto and passionate wails coming across overpowering and unsustainable. The instrumental tracks also tended to lack solidified structure, with climaxes coming too late and crescendos accumulating weakly. Although the band still had a way to go with finding their winning formula, the tight musical chemistry and well-implemented pop tendencies that the four-piece showcased was enough to impress many.

Italy’s instrumental art-rock veterans Stearica were next to play within the old potato factory’s walls. Delivering their texturally complex, dark and sullen take on rock, the trio’s set was anthemic and powerful. Layered and off-kilter guitar parts and driving bass accompanied grounded drums that presented a set was that too short to do their music justice. A complete tour-de-force of showmanship and dynamics, the unfortunately small crowd was left in awe.

Loop-rock duo Right Hand Left Hand were last to perform, bringing with them three pedalboards, two guitars, a drum set and a couple of Welsh accents. Kraut in parts, the simplistic looped riffs were concentrated with angular leads and harmonised melodies. Although a lack of variety meant that some songs became repetitive, the duo were never too far from an interesting riff to mix things up. Right Hand Left Hand weren’t anything ground-breaking or fresh, but also weren’t a band trying to be anything of that calibre. It was honest rock music thriving in a post-rock scene that is arguably one of the most welcoming musical cultures in the UK. It was purely entertaining and fun, without any of the unnecessariness that comes along with math-rock’s somewhat overly gratuitous ways.

Once again, Nottingham proves itself as a city that promotes DIY musical culture like no other. Despite the gig’s low turnout, the friendliness and good vibes of a Buttonpusher gig are unmatched, as everyone chatted, drank and bobbed their heads in a manner that sang the highest of praise for the bands on show. A Pig Called Eggs humoured, Pocket Apocalypse entertained, Stearica unnerved and Right Hand Left Hand finished the night’s proceedings in good taste. As another success to celebrate the math-rock scene, it looks like it looks like next month’s show will be highly anticipated.