Trending
You are at:Home»Reports»Live Review: Rockstadt 2016
By Dayv Oblyvyon on September 12, 2016 Reports

Picture the scene: a 270-degree panorama of lush Transylvanian forests, with the final arc completed by a Carpathian mountain crowned with a 13th-century castle. This is the vista that surrounds the festival grounds of Rockstadt Extremefest, Romania’s intimate answer to European summer festivals like Wacken Open Air, Hellfest and Graspop Metal Meeting. Based on this, Rockstadt is already ahead on points when it comes to location, but what really matters at these events is the music – and the 2016 lineup was nothing to be sniffed at, especially considering that this festival only has a history of four years. With headliners from across the globe (including acts representing regions as far-flung as Finland, the USA, Australia and others) showcasing the best in almost every genre of extreme metal, supported by a strong base of local and less established bands, what could go wrong?

Well, the weather, for starters. Despite sunny forecasts, two days of rain greeted festivalgoers – but this did very little to lower the morale of 3000-odd metalheads, especially given the relatively low-priced drinks (noroc, Ciuc Beer! You’re a sponsor well worth having!).

But apart from the inclement weather and subsequent mud, Rockstadt turned out to be one of the best-organised festivals I’ve had the pleasure of attending: a well-stocked merch store, large variety of food and drink stalls, excellent music and punctual scheduling, all combined with a friendly audience that represented all walks of metal life. And then there was the music… with over 50 bands spread over four days, detailing the performance of each is an exercise in futility, but standout performances deserve individual mentions. 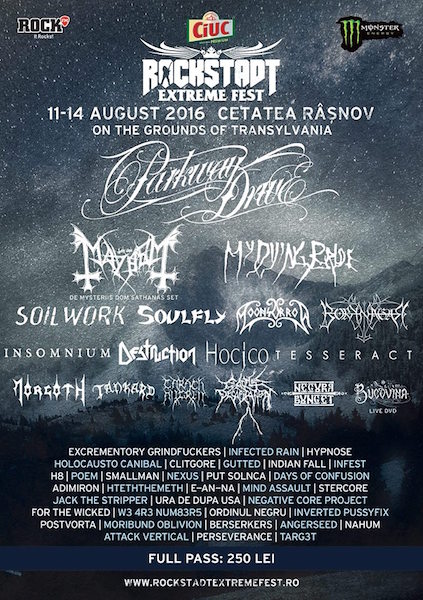 Footnotes
1. The main stage was named after a local hero who died saving others from the fire at the Club Colectiv in Bucharest on 30 October 2015 (BBC report here). His face also adorned the bass drum heads during Bucovina’s performance. As well as this, Adrian Rugina was posthumously awarded the National Order for Merit.
2. His new role as the festival organiser and promoter has left Stefan Zaharescu with little time for band activities, it seems.
3. Romanian/South African promoter Wrath Inc. (link here) is doing great work in developing a cross-continental ‘exchange program’ for local bands from both countries, with the Mind Assault show marking the first South African metal band to play in Romania. They have also recently put on a sell-out show with Thy Art is Murder and Fallujah (Facebook event here) in Bucharest and are constantly adding bands to their roster. Wrath Inc. also regularly has a hand in shows across South Africa.