“You might not understand what we are saying, but I think you do, if you catch my drift.” 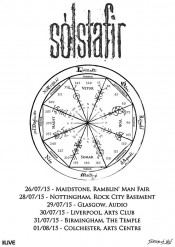 Thus spoke Sólstafir vocalist Aðalbjörn Tryggvason as the Nottingham crowd are treated to ninety minutes of raw emotion and intense, yearning melody. The Icelandic troupe have been delivering their unique sound throughout the metal world for the past twenty years, a career that has seen the band’s sound grow and shift through myriad sounds and experimentations, and despite recent internal friction, their masterful journey has led them to this moment – a continued tour of 2014’s masterpiece Ótta [reviewed here].

First up though comes a band who deliver captivating and emotional music from an entirely different perspective. For Scotland quartet Dialects, this tour offers up the prospect of a potentially new crowd demographic, and as they mentioned in their interview with Broken Amp recently [read here], they were very much looking forward to the experience.

Opening with a barrage of energy and raucous instrumental rock that perhaps not all were expecting, the band crank the amps up to ludicrous volumes and maintain these clamorous levels throughout; the audience receive respite only when the band’s blend of post- and math-rock shifts to a more subtle ebb and flow.

Playing tracks taken from this year’s début EP Let the Kids Light the Lanterns, the band churn through the likes of ‘Restless Earth’ and ‘Unknown Orbit’ with the same technical precision that created the songs in the first place, proving that they can more than handle their creations on stage. In fact, Dialects are a must-see in a live environment; the songs are lifted to even loftier heights; the already huge riffs accentuated; the more delicate moments glue the audience to their places with all eyes on the stage.

As the band exit to a warm and welcoming reception, the importance of an open mind within the metal community is achingly clear, and tonight is nothing short of a shining example. They are clearly humbled by the response from the crowd and truly grateful for the chance to be a part of this tour, which is not only an opportunity for a fantastic new band to showcase their talents, but judging by some of the comments overheard, they have also undoubtedly made a host of new fans in the process.

With a large crowd now gathered in anticipation of Sólstafir, the atmosphere thickens – and not only due to the over-zealous smoke machine operator. The band come on to the fantastic ‘Dagmál’ and the audience are transported to another place – a place where they remain for the next hour and a half. The majority of the performance is based around 2014’s superlative and unique release Ótta, and being arguably the band’s most fully realised moment thus far, it’s hard to be disappointed. Guitarist Sæþór Maríus Sæþórsson swaps his primary instrument for a banjo as they play through the album’s superbly catchy title track with precision and finesse, and ten minutes later they receive the rapturous applause they deserve.

Bass guitarist Svavar Austman looks like an extra from the Blues Brothers with his trilby hat and dark shades, his Rickenbacker cutting through the guitar noise with ease and complementing the band’s sound perfectly with its defining low-end. Aðalbjörn informs the crowd that the band played on this exact stage three years ago for their inaugural Nottingham show (“feels like last week,” he continues, only half-jokingly). The sparse show of hands that are raised when he asks how many of us were here in 2012 is the perfect indication of what Ótta has done to raise the profile of this inimitable band. He then asks for twenty seconds of pure silence for the purposes of introducing ‘Rismál’ a capella, and the crowd are more than happy to respect his wishes. When this moment appears again half way through the song – you could hear a pin drop.

With Svartir Sandar‘s closing song ‘Djákninn’ and Ótta opener ‘Lágnætti’ played to perfection, Aðalbjörn explains to the crowd that, “you might not understand what we are saying, but I think you do, if you catch my drift” – a statement that defines the band so perfectly. The raw emotion that can be heard throughout their back catalogue is not only magnified in a live environment, but it becomes the defining aspect of the Sólstafir live experience.

With a couple more from each the last two albums played, Aðalbjörn jokes that there’s not much to Iceland bar a black desert (“you don’t need to go to Iceland, you have castles here!”), but it is surely the austere and stunningly beautiful landscapes of their native country that has helped create and shape this unique band. Ending with ‘Goddess of the Ages’ from the equally stunning album Köld, the audience are woken from their trance and left standing in awe of a hugely emotive performance, from a band that defy genres, dissolve musical boundaries and language barriers. There is heartache; there is loss; there is wonder; there is longing; there is beauty. There is Sólstafir.