Trending
You are at:Home»Reports»Live Review: Tesseract, The Contortionist & Nordic Giants at Thekla – 3rd February 2016
By Neil Criddle on March 9, 2016 Reports 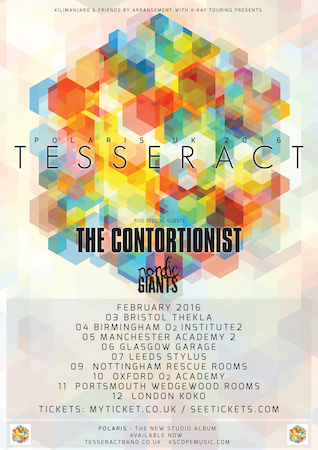 
What a way to commence the UK leg of Tesseract‘s European tour for their new record Polaris, than to sell out a boat in the middle of Bristol’s docks! Recently refurbished, the venue appears from the outside to be nothing special. It’s only when you venture into the dark caverns of its underbelly that you truly appreciate how apt this venue is for the show tonight.

A dark, moody silence precedes Nordic Giants as they strut onstage to assume their positions. Sitting on opposite sides of the stage but facing each other, they carry with them a curious atmosphere highlighted by their long-haired almost tribal-style masks with tremendously detailed makeup. Throughout their set, a large video monitor is displayed on the wall depicting various stories to accompany the music. Layers upon layers of relentless drumming coupled with atmospheric melodies emanating from the keyboardist drags the majority of the audience into an eerie ritual.

There appears to be little in the way of movement throughout Nordic Giants’ set. What you see is a range of gentle heads nodding in time with the music, but mostly just sheer appreciation of a tremendous showing of musicianship. Although the band are quite likely to polarise opinion amongst the heavier music fans, there is an undeniable sense of wonder about them, and one can only assume their fan base will dramatically increase if they continue to perform like this for the rest of the tour.

Fresh from his stand-in duties on Volumes‘ recent run with Northlane, Michael Lessard assumes his regular responsibilities as vocalist for The Contortionist. Most certainly not for the faint-hearted, the band are an odd concoction of various progressive styles of heavy music incorporating ambient metal combined with flashes of deathcore resulting in a beast of somewhat untameable qualities. At points throughout their performance, the audience start to relate to a superbly technical guitar riff complete with groove and heaviness, before the band break into sporadic melodic interludes filled with atmosphere and suspense.

This pretty much happens the whole way through their set, songs merging into each other, with spasmodic audience participation and breaks of ethereal ambience. What does stay constant during the 40 minutes is Lessard’s dominance of the stage. A commanding figure at the front of the stage, he demonstrates eccentric characteristics as the band pummel their way through the instrumentation – one minute he’s crooning through a clean-vocalled passage while gently rocking to the beat of the drums and the melody of the guitars, the next he’s delivering harsh-vocalled screams in heavy sections that veer into the crushing. A mesmerising, wondrous and captivating performance, he completely steals the show from the rest of the band members.

And then it’s time for the headliners. Polaris signalled Daniel Tompkins’ first recorded output with Tesseract since One débuted in 2011. The frontman has always had a tremendous voice but tonight it seems completely off the scale, with no real difference between what the audience hear tonight and what they heard previously on record. Despite the revolving door policy of the vocalist’s role, Tesseract look like a steady, consistent ship tonight. The lighting and sound throughout the evening have been pretty impressive, but are raised another couple of levels as Tesseract take to the stage. Tompkins’ otherworldly voice connects with the ferocious riffing from James Monteith and the intricate drumming from Jamie Postones, the mood appears to change with every light change adding further atmosphere to the music.

With the band covering equal slices from each of their three records, the crowd lap up the contrasts between the songs on tonight’s setlist. The harsher rawness of One segues into the glorious melodies of Polaris before straying into proggier territory with Altered State, the setlist encapsulated everything that makes Tesseract one of the UK’s greatest treasures in the progressive metal scene. With mosh pits turning into gentle nods of appreciation before rearing into heaviness again, there was literally no guessing how the band was going to lead the crowd next.

The highlight of the set was hearing the band open with Polaris‘ ‘Phoenix’. To see and hear Tompkins deliver that melodic vocal part midway through the track so faultlessly [2] was an incredible sight that will stay with me for a very long time. Everything that followed was confirmation tonight was a very special moment in Tesseract’s history to date. Providing Tompkins can continue to produce this quality of music with the band, and they have certainly hinted that this line-up is there for the long haul, then there is absolutely no reason not to see Tesseract playing much larger venues and stages in the very near future.

Footnotes
1. Tesseract had a number of vocalists before releasing One with Tompkins. The band then released an intermediary album Altered State with vocalist Ashe O’Hara, who subsequently departed and now fronts Voices From The Fuselage. Tompkins rejoined in 2015 to release Polaris.
2. Link to the part in the song mentioned.