Trending
You are at:Home»Reports»Live Review: The Body, Full of Hell and Caïna at The Ruby Lounge – April 12th 2016
By Tom Woodward-Massey on April 30, 2016 Reports 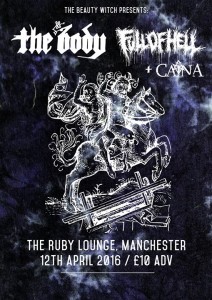 Tonight’s show saw co-headlining acts from the opposite ends of the extreme music spectrum perform at Manchester’s The Ruby Lounge. On one hand, there’s Maryland quintet Full Of Hell, who play a visceral blend of powerviolence pace with grindcore and death metal influences, culminating in a performance which stretches the fringes of hardcore. On the other, the Rhode Island-cum-Portland duo The Body rely on a sound based on unhurried sludge metal with an aptitude for the harsh clamours of industrial. Despite seeming entirely unalike, they share a huge deal in common: each dabble in volume excess, extreme musical tendencies and harsh noise feedback. Both parties have a rich history of being receptive to working with other artists [1], thus instigating a joint-force collaborative album titled One Day You Will Ache Like I Ache. Oddly, the platform for showcasing this material isn’t exercised, instead the groups take to the stage sporting a minimal backdrop of wine-red curtains and perform individual sets which poise as a deeply enjoyable expression of their extreme music.

First up, however, are Caïna, whose performance is nothing short of astonishing. The Manchester based band play a set of beat-driven “cinematic black noise” [2] which recalls the work of Coil, Bermuda Drain-era Prurient and Merzbow at his most rhythmical [3]. Vocalist Laurence Taylor lurches onto the venue floor and orders the audience to “move in”. The crowd gathers around ritualistically whilst Andrew Curtis-Brignell positions himself on stage with two tables worth of effects pedals and a laptop, getting the ball rolling with the first instances of dark ambient sounds which creep through the PA. Instantly, the aura is intriguing and mysterious, with dark red lights shining onto the stage through thick layers of white smoke. It becomes impossible to avert attention away from Taylor, whose black metal shrieks resonate through the room as he weaves in and out of the small gaps between audience members. It’s almost confrontational as he screams in the faces of the crowd without a microphone (which is wrapped around his neck), falling to the floor on all fours. The enactment was captivating and absorbing, signalling a range of responses from bemusement to beating hearts. Caïna serve as an excellent example of the disconsolate sounds which stem from Manchester’s COF label [4] and as a superb start to the night.

Full Of Hell follow, presenting themselves as more of metal group than their hardcore roots suggest, wearing Carcass and Obituary shirts and brandishing guitars so metal they’d make Kerry King blush. They juxtapose the immediacy of powerviolence material such as ‘Burst Synapse’ and set highlight ‘Endless Drone’ with the sluggish breakdowns of ‘Vessel Deserted’ and the atmospheric noise [5] of ‘Pile of Dead Horses’, only to blend the dark ambience with a return to the driving pace of ‘Kopf’.

Frontman Dylan Walker remains on-stage yet performs with immense energy, his vocals battling through the clamour, sounding more guttural than ever before. Drummer David Bland becomes almost mesmerising to watch, performing with extreme intensity and prowess, often playing with two sticks in each hand. Crowd movement is kept to a minimal yet ecstatic applause is given at the conclusion of each brief period where feedback isn’t creating minor tremors through the venue. ‘Gordian Knot’ signals the end of the short but incredibly sweet performance (understandably considering the nature of their music) which mostly consists of the first half of their collaboration with Merzbow and their latest EP, Amber Mote in the Black Vault. 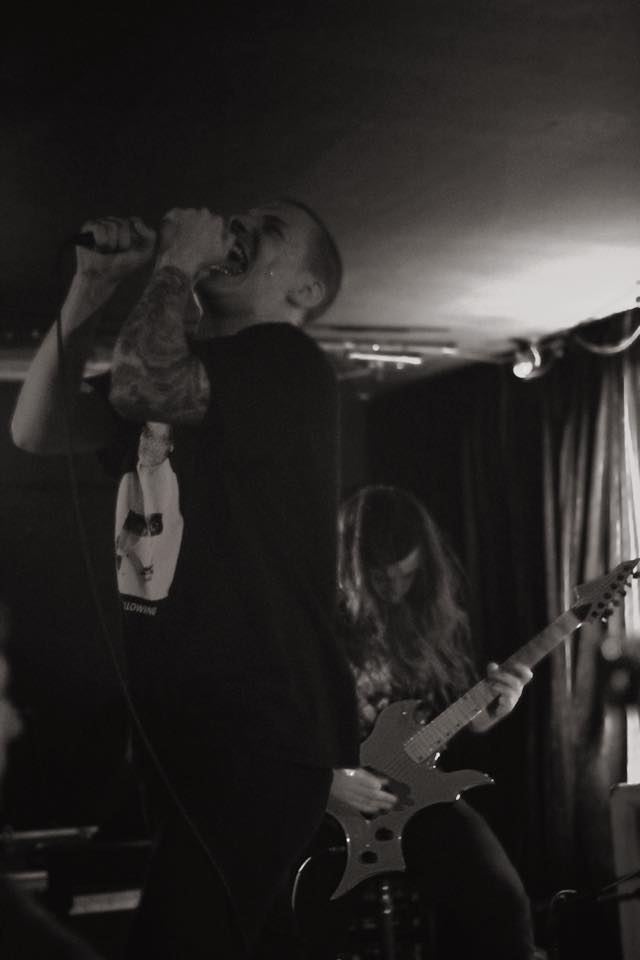 The volume and harsh wall-of-noise sound from the opening chords provided by The Body’s Chip King prove they are one of the most sonically punishing acts out there. The two-piece manoeuvre through droning atmospheres, neck-bending sludge and pounding industrial rhythms, exploring a range of tracks from their discography. The extreme qualities become fully realised and amplified in this live setting, multiplying sentiments of their notorious misanthropy two-fold. The bass-heavy instrumentation isn’t the only aspect on show; percussionist Lee Buford utilises electronic thud-inducing drum pads whilst King wails with banshee-like shrieks, sounds which cut through the hypnotic, fuzz-heavy sludge. A minor downfall of the set is The Body don’t showcase their enticing studio experimentation; lacking the art-pop vocal stylings present in their latest album No One Deserves Happiness and choral experimentations featured in All the Waters of the Earth Turn to Blood. Sadly, their live set felt absent in the theatrical aptitudes that give The Body’s music a flair of originality and excitement. However, despite these negligible qualms, the duo perform a harsh yet incredibly absorbing set to an audience where every head nodded in sync; they could have played for hours without the crowd growing tired of the punishing assault on their senses.

By the two headlining acts deciding not to delve into their collaborative material, the audience received the best of both worlds; groups at the boundary-pushing forefront of their respective genres. With a truly excellent support act and two captivating performances from artists at the height of their finesse, all parties involved in tonight’s show are not to be slept on.

Footnotes:
[1] The Body have worked with Krieg, Thou and The Haxan Cloak to name but a few, whilst Full Of Hell joined forces for a double album with musician Merzbow in 2014.
[2] Caïna list this as their genre on their Facebook page.
[3] The band announced they were set to perform “a synthetic-beat driven noise set” with influences from Bermuda Drain and Merzbeat on the Facebook event page prior to the show. Usually the band performs as a four-piece black metal group.
[4] COF (Bandcamp link) (formerly known as Church of Fuck) are a Manchester based independent label who specialise in crust, hardcore punk and black metal. Caïna released their 2015 album Setter Of Unseen Snares and a split with Esoteric Youth on this label.
[5] Full Of Hell are renowned for their love and experimentation with noise music, having collaborated with Merzbow and released noise EPs under the signature of FOH, in a similar sporadic manner to powerviolence pioneers Man Is The Bastard did with their Bastard Noise project.