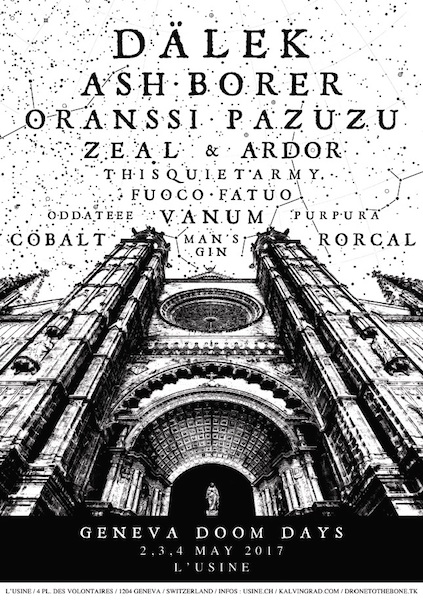 L’Usine is the home of underground culture in Geneva; this dilapidated, labyrinthine former factory on the banks of the Rhône has been nurturing local bands and artists of all genres for decades, and has a mythical status in Switzerland. L’Usine still has the feel of a commune, but is a professionally-run operation these days, and plays host to some of the biggest names in metal as they pass through Europe.

This week its main stage, Kalvingrad, presented Geneva Doom Days, a 3-day event with an incredible line-up including Ash Borer, Vanum, Dälek, and ThisQuietArmy, most of whom have just been together at Roadburn. I was most excited about the final evening, headlined by Oranssi Pazuzu, because it also featured Zeal and Ardor, possibly the most hyped new act in metal this year. Could Manuel Gagneux’s one-man blend of chain-gang spirituals and black metal possibly live up to such huge expectations? And how would he translate a short and experimental album which relies heavily on special effects into a live band performance? 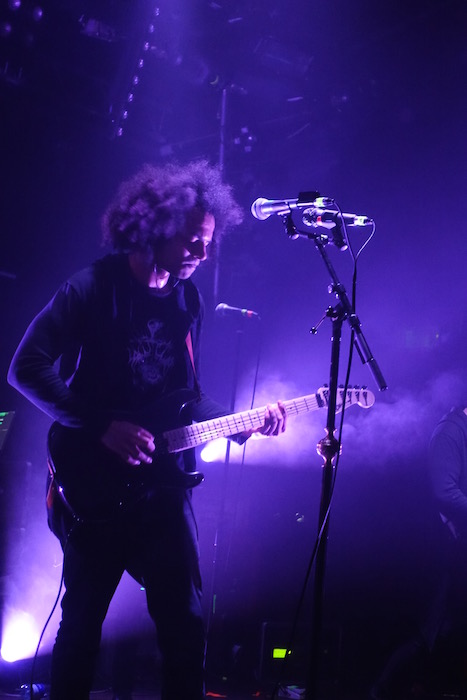 Zeal and Ardor were on stage first, which may seem surprising, but the fact is they are the new kids on the metal block, completely unheard of last year, whereas the other two bands have been around for 10 years and 15 years respectively. We all know the back story of Zeal and Ardor by now; inspired by some racist comments on 4Chan’s music section, Swiss musician Manuel Gagneux came up with the notion of slaves turning to Satan instead of accepting the Christianity that was imposed upon them. He did his research, recorded all the vocals and instruments himself on Devil Is Fine, and it was a musical triumph, utterly unique and universally lauded. He is currently the darling of the music press, and has had to cobble together a live band very quickly.

And they were wonderful. Haunting, chilling, intense. They appeared wearing matching black hoods and stood still, ominously facing the crowd, before launching into first track ‘In Ashes’. Zeal and Ardor sound far more ‘metal’ live – perhaps necessarily so since they are more reliant on the guitars, but it may also be a sign that they might head in this direction rather than towards the more electronic music which features on the album. 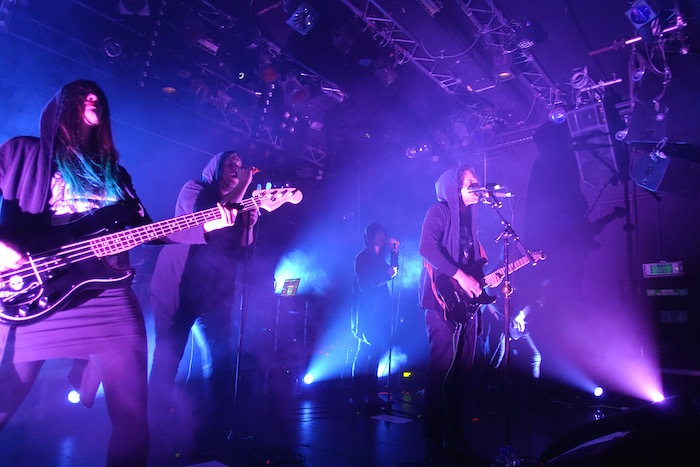 The death metal breakdowns were brilliant, aided by Manuel’s excellent screaming and some great lighting effects. Manuel has a powerful and highly versatile voice, and although he comes across as shy – there were a few awkward silences in between songs, which he endearingly acknowledged – he has incredible stage presence. At times his eyes were utterly demonic. His young guitarist and bassist were technically accomplished and had great energy. Two male backing singers provided the slave chants and were an integral part of proceedings, whilst drummer Marco also managed the effects. Stand-out tracks were the anthemic ‘Row Row’, the poignant ‘Come On Down’, and the terrifying ‘Children’s Summon’. And the stand-out moments were those powerful breakdowns. They finished with the album title track ‘Devil Is Fine’, which as a crowd we somehow felt we had always known. It was over all too quickly, and the crowd were blown away.

My only concern with Zeal and Ardor is that they are being rushed into over-marketing themselves and turning their uniqueness into a gimmick. They had set up an elaborate ‘shop’ area to sell merchandise inside the venue, decorated with candles and slave-trade artefacts including a huge working guillotine (used to stamp souvenir necklaces) and a wooden restraint stand with shackles. While there’s nothing wrong with metal bands capitalising on their image, slavery is a highly politicised and controversial subject. They handled it so deftly in their music that these gimmicks were unnecessary. After their set, the band congregated gleefully around the shop while their roadies shackled and branded a fan using a blowtorch. It was studenty and uncomfortable, not least as I wondered how on earth their insurance would cover that going wrong. These misjudgements can be forgiven as inexperience though, and Zeal and Ardor were essentially a triumph tonight. I cannot wait to see what Manuel Gagneux comes up with next. 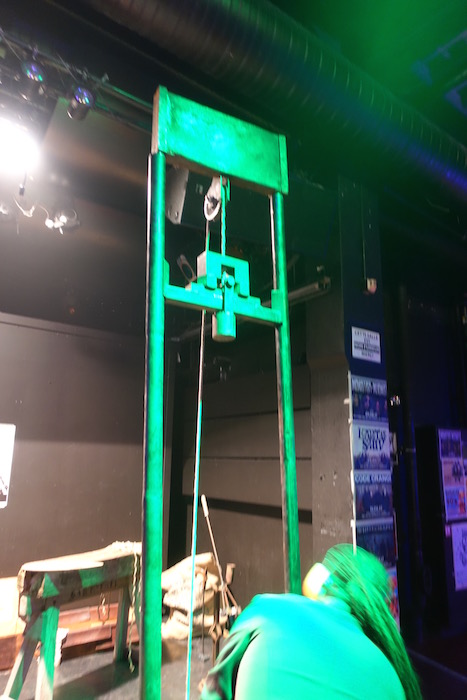 Next up were Cobalt are an American black metal band from Colorado, with a cult following and a chequered past. A two-man project, founder member and vocalist Phil McSorley was ejected from the band in 2013 in unpleasant circumstances1, leaving Erik Wunder (composer and multi-instrumentalist) to continue without him. McSorley was replaced in 2016 by Charlie Fell (ex-Lord Mantis), and soon after Cobalt released their first album in seven years, Slow Forever, to critical acclaim.

Beginning with ‘Hunt The Buffalo’, most of the songs in their set were from the new album and despite the fundamental line-up change, the band’s signature sound (huge, desolate riffs) and themes (animal instinct, the human savage, nihilism) were still present.

Wunder was behind the drums, with Fell leaping about in contorted dance moves and demonic shapes. His raspy screeches appeared to come from a far-off place, entirely in keeping with the sonic landscape of Cobalt but which didn’t help him to connect to the crowd. He was seemingly agitated about something and disappeared off stage for a couple of long periods. However, this did give us time to admire the bass and guitar work of Jerome Marshall and Shane McCarthy.

The droning guitar riffs provide the real beauty of Cobalt and there were hypnotising moments. The riffs are so, so heavy, occasionally approaching a thrashy feel but usually trudging magnificently. ‘Slow Forever’ was a pounding end to the set, its neverending-ness driving the message home. Tonight was not a perfect performance, and there were a few chaotic moments, but the day after the show, I have been listening non-stop to Slow Forever – something about this band has got me hooked. 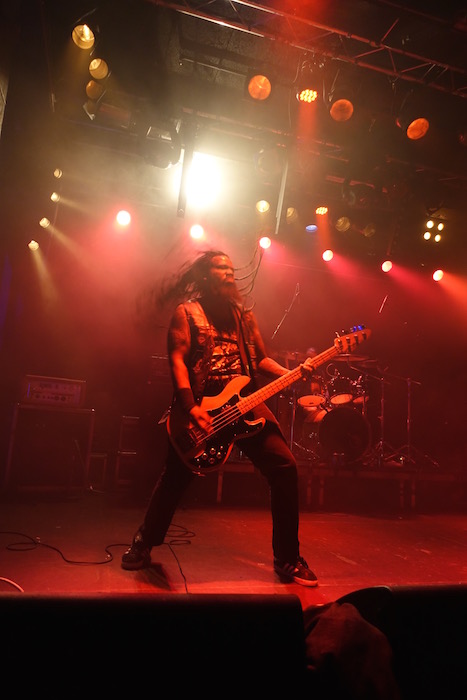 There’s a real Western feel to Cobalt’s songs, which somehow conjure up images of murderous rednecks, deserted small towns, rifle-hunting. Although Cobalt state that they are inspired by Ernest Hemingway and Hunter Thompson, [2] I kept on thinking about Cormac McCarthy throughout the set. So it was very interesting to read today an interview with Charlie Fell, in which he states that he and Erik had been watching The Road during the writing process of Slow Forever. Just goes to show how powerfully music can illustrate literature.

A different crowd gathered for psychedelic metallers Oranssi Pazuzu, and a new energy. Oranssi Pazuzu (‘orange demon’) are a Finnish band who have a huge following and have been described as black metal, radical metal, and space rock.

They created a different sort of bleakness than Cobalt. Using a huge variety of effects (from space noises to an old-school Stratocaster), they built layers upon layers of saturation, taking us up and down in waves. In fact, one of their songs is called ‘Saturaatio’. Theirs is less a wall of sound than an infinite series of revolving prisms, and they had the crowd gripped. Their sound was so complex that you could really take from it whatever you wanted, and everyone in the audience was in their own cocoon of emotion. 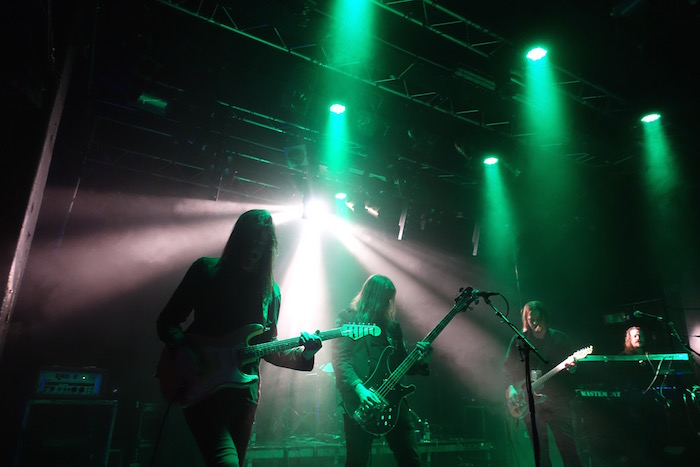 A fascinating evening of metal, but for me the show went to Manuel Gagneux and his pals. See Zeal and Ardor now while you can – I got lucky last night and soon they won’t be opening for anyone.

Footnotes:
1.  He allegedly posted racist and homophobic content on social media, as highlighted in this article by Bandmine.
2. An interview Wunder did with Invisible Oranges