The internet has effectively put an end to city-based music scenes. There was a time when you could identify a band’s hometown by the music they played, whether it was the melodic death metal of Gothenburg or New York hardcore. As the years have passed, such divisions have blurred. Social media and Spotify have given bands easy access to music far from their front door. Which is how you end up with Lord; Virginia-bred but New Orleans-inspired. For while their stoner metal can be said to have taken influence from Virginian forefathers of doom, Pentagram, it’s actually been drinking the Kool-Aid of Neurosis and Crowbar. Their third album, Blacklisted, is packed with rumbling blues-inspired riffs that will have you desperately trying to figure out whether you want to bang your head or down your beer. That they’ve put it through the fuzzy guitar tone of the Melvins only makes it all the better. 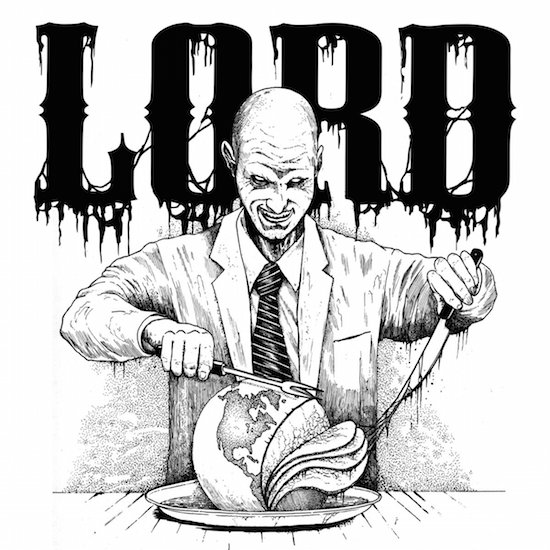 Opener ‘Mile After Mile’ is the undeniable highlight. It may sound like it was recorded in someone’s garage, but that DIY feel only add to its stoner joy. It’s packed with groove, and Steve Kerchner’s clean vocals have a maniacal edge to them that works perfectly with this evil sounding music. In fact, it works so well that the band would be better off ditching the stereotypical unclean growls which add little to the overall song.

Lord’s problem then comes with following such a commanding opener, something which they struggle to do. ‘They Lied’ shuffles out, flailing its elbows as it blends hardcore into that Southern drawl. It’s a cumbersome track, never managing to settle into a groove and feeling more like a mish mash of parts than a cohesive song; its over-reliance on unimaginative roars also sets it back.

Thankfully, it’s a stumble rather than a fall. The title track is just as big a sounding beast but rather than ramshackle, it’s spiky and judgemental of a metal scene that claims to be for acceptance but too often delves into the ugly. It’s a dark and toxic song, and is all the better for it as Lord set out a desire to follow their own path.

There’s one more surprise on Blacklisted in the shape of ‘The Heart of a Hero’, which sees Lord opening up a seam of hard rock melody. It’s still a slow, distorted piece of stoner metal, but the guitars have an edge of rock and roll flair to them, and a touch of excess as they delve into solos. Shove this track through a clean production job, and it would sound at home next to the mainstream side of latter-day Gojira and Mastodon.

Blacklisted is packed with the kind of riffs you feel in the pit of your stomach, and is fuelled by an anger which drives Lord to the next level. It doesn’t always work, and at times the homemade feel lets it down. However, when it’s firing on all cylinders, this is a release that will have you banging your head and begging for more.