Trending
You are at:Home»Interviews»Low Flying Hawks: “Our idea is to make music a sacred thing again.”
By Angel on November 24, 2017 Interviews

Fuzzed out doom easily lends itself to psychedelic experiences, even without resorting to using recreational substances. Very often that kind of music can be overwhelming to listen to – oppressive density which results more in bad trips than good, or in other words “harshes the mellow, man.” One particular enigmatic band who strike the balance perfectly are Low Flying Hawks, an international group containing two musicians from Mexico (pseudonyms AAL and EHA), and Dale Crover/Trevor Dunn from the Melvins. We spoke with EHA about their second album, Genkaku, and the influences (musical or otherwise) that were poured into the mix.

While Low Flying Hawks’ first album Kōfuku only came out in June 2016, the music on the record has a far earlier genesis. EHA notes that the band “is a project we’ve been working on for quite some time now, and these records have been the result of many years of playing, listening, etc.” Not necessarily listening to their local surroundings though – while Mexico certainly has a metal scene (especially where they are based in Mexico City), EHA admits they don’t follow such goings-on nowadays. “We’ve never been part of any scene and definitely never been interested in the local scene as we don’t relate a lot to the styles and sounds from Mexico.” There are some bands they like – they namecheck Esquivel and Dug Dug’s [1] for specific examples, “but those are long gone. There’s some cool bands from the 60s that disappeared into obscurity and rarely get repressed. It’s a shame cause some are really good!”

There is a secondary purpose to avoiding the community aspect – as mentioned earlier, the Mexican half are quite enigmatic with their identities, and there is minimal information online about them. “We’re not hiding, we just don’t want to take the listener’s attention off the music.” He likens this to the world of visual art: “When you look at a painting they’re often not signed, and if they’re signed it’s hard to understand sometimes who signed it. That idea we love, who cares who painted it!” 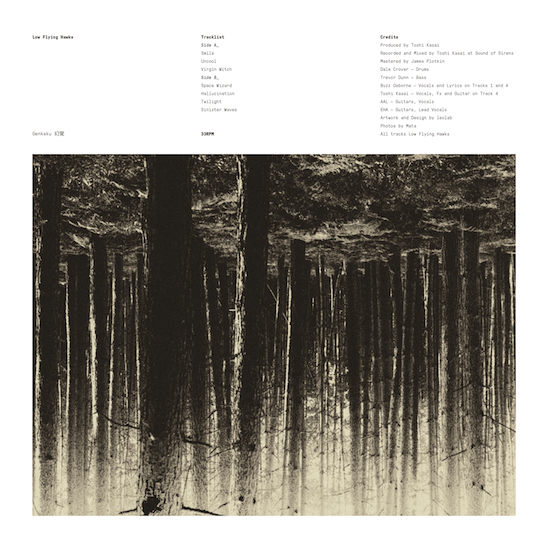 One can see his point – listening to Genkaku doesn’t instantly evoke a particular emulation of any style. “We’ve always been more into the European, American, Japanese scenes.” There are apparently a ton of influences thrown into the mix, some of which make more sense than others. Among the names mentioned are modernist classical composers Schönberg and Gorecki, through to psychedelic elements in Tangerine Dream and The Beatles, the experimental jazz of Miles Davis, to familiar metal faces in Celtic Frost and Black Sabbath. His seemingly indiscriminate choices are borne of decades of listening, and as he wisely points out, “everyone influences everyone. It’s what you see hear and read that makes you who you are. So we’ve been doing this for almost 40 years, we’ve got a little piece of everything we’ve liked.”

Genkaku comes as the second part of a trilogy “that circles around a sort of Sisyphus-themed idea. The first one Kofuku was a more dreamy drone based record, Genkaku is a more psychedelic hallucinatory straight-forward record, and the third part (which we’ll hopefully record next year) brings it all back home, back to pushing the stone again.” To this end, the Japanese album titles reflect their contents perfectly. ‘Kofuku’ means ‘bliss’, while ‘Genkaku’ means ‘hallucination’ or ‘illusion’. “We love the Japanese language and how it can say so many things and be so precise.” The language itself helps to summarize the concept that Low Flying Hawks are going for, and apparently when the third part of the trilogy emerges, “it’s going to be pretty clear why and how they match.”

Many people have made mention of experiencing trances and out-of-body experiences while listening to Lowflyinghawks. How they do it is deceptively simple. “We try to make our records very layered and we hide a lot of things between the layers. So it’s kind of a hallucinatory experience as you hear different things every time and repetition is meant to take you in a state of trance.” This also hides a potent message, one absolutely worth considering: “Our idea is to make music a sacred thing again, art instead of entertainment. Sadly the world has turned everything into money and fast turnarounds and that truly kills everything because you really have 15 minutes to like a record because they’re throwing the next thing at you. That makes things lose their intention, some things take time to sink in, and it seems the world does not have the time. We live in such a hurry, sometimes it feels we’re being chased and that only makes people more fearful and desperate, which I guess is the whole objective of the current governments and markets: fear, obey, consume.”

As for the immediate future, Low Flying Hawks are not slowing down with their musical output – “We’ve got the new EP ready for mixing hopefully coming out next year, we’re planning to record the third part of the trilogy next year and hopefully do some very special shows in the near future!” One may assume that these shows will involve Messrs. Dunn and Crover, though maybe Buzz Osbourne can also reprise his role on ‘Smile’ and ‘Space Wizard’. One can dream.

You can follow Low Flying Hawks on Facebook, and pick up Genkaku on their Bandcamp page here or via Magnetic Eye Records. Thanks to EHA for his time, and Andy Turner for the opportunity.

This article was a collaborative effort, with questions from Stephen Fallows.