Trending
You are at:Home»Reviews»Metal»MAKE – The Golden Veil
By Tom Woodward-Massey on August 27, 2015 Metal, Reviews
Band: MAKE
Album: The Golden Veil
Record label: Black Iron Records
Release date: July 17th, 2015
Website & Facebook
Purchase/Download
Tracklisting:
1. I Was Sitting Quietly, Peeling Back My Skin
2. Breathe
3. The Immortal
4. We Are Coiled
5. The Absurdist
6. The Architect
7. In The Final Moments, Uncoiling

MAKE are a three-piece from North Carolina who utilise an eclectic array of inspirations. In their sophomore record The Golden Veil, the incorporation of influences from artists as far afield as Glenn Branca, Can, The Velvet Underground and Godflesh [1] contribute to MAKE’s creative take on a variety of metal crafted by spear-headers Neurosis and Isis. MAKE’s music does not operate on an over-reliance of crescendos and drawn-out build-ups to create a sense of atmosphere as many post-rock/metal bands do; the atmosphere in The Golden Veil instead lies in the band’s ability to create fierce and morose sections sporadically without pandering to tried and tested formulae. The album is at times expressly dense and extreme, yet the group are more than proficient at providing space to breathe room with dreamy intricacies and cleanly sung vocal measures, enriching the mood evoking music that MAKE intend.

The opening track ‘I Was Sitting Quietly, Peeling Back My Skin’ is just as mysterious in sound as the song title suggests: noisy synths are accompanied by an ambient, wall-of-sound drone which begin to navigate over Eastern-sounding acoustic melodies. The song perfectly sets out a foreboding atmosphere and suggests pre-emptive bouts of intensity.

Hints of a sudden burst of heaviness are quickly dismissed as the succeeding track – simply titled ‘Breathe’ – begins. A solo drum pattern starts, followed by a vigorous, reiterated riff supplemented by crash cymbals which creates a repetitive refrain, a technique their Krautrock influencers Can were so highly regarded for. It is halfway through the track that the heaviness surfaces as coarse, growling vocals appear for the first time. The album is not limited to this type of vocal; they range from violent howls to tuneful chants and country-esque musings which adds a twist of diversity to the overall sound.

Following on, ‘The Immortal’ starts with flourishing and wistful guitar passages and intricate rolling drums that lead into chanting, melodic vocals which rise and fall gracefully. The song begins to slow, respire and quieten as if it were about to end, until a sudden, impulsive intensity returns accompanied by almost black metal-sounding shrieks. The startling track ends with off-kilter sloping drums, elegantly melding into ‘We Are Coiled’, as if it were part of the same song. The luminous, swirling bass is presented low in the mix and seems as part of the background, but it develops into the forefront and paramount of the piece. The guitar reverberates and meanders into an ambient drone soundscape as the ride cymbal falls onto your ears like raindrops. 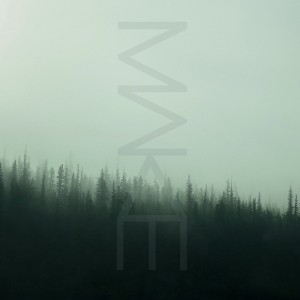 ‘The Absurdist’ pursues this line of thought, beginning with staccato guitars and a rippling bass that demands attention. The echoing vocals featured here are interesting; they’re reminiscent of the slurred country rock of Neil Young and Kurt Vile, a style not usually associated with post-metal. They mutate to overlapping, sinister barks from the combined vocals of Scott Endres and Spencer Lee. The fear-provoking vocal delivery featured at the track’s close is exceptionally commanding, conveying the significance of their lyrics with fervent anger and then suddenly, without warning, the song abruptly cuts out.

The longest track on the album then commences; ‘The Architect’ is an ambitious space rock-influenced piece which begins with post-punk-alluding basslines that digress into whirling guitars steeped in phaser effects. This portion of the album effectively showcases the psychedelic side that is hinted at in numerous parts of the record, and successfully allows for an expansive sound to be achieved.

‘In The Final Moments, Uncoiling’ could perfectly soundtrack one of the more unnerving scenes from Twin Peaks [2] with its ominous, droning synthesizers, off-beat rhythmical clicks and background resonances that resemble heavy breathing. Like the title suggests, this is the album’s conclusion and the song envelopes various musical traits featured throughout The Golden Veil; the atmospheric, the fierce, the morose and the dark. The song adjusts lucidly into industrial sounding guitar riffs that recall the work of Justin K. Broadrick, [3] accompanied by sludgey, sparse bass chords. The album is ended in a style parallel to post-rock and atmospheric black metal: tremolo picked guitars, subdued echoes and ambient synths feature.

To conclude, The Golden Veil features temperaments of the wintery and atmospheric, channelling between dreamy instrumentals and strategically positioned heavy vocal parts, confirming MAKE’s capacity to create an inspired take on post-metal. The album is best listened to as a whole piece to fully appreciate it; the first track sets the album off in the right fashion, the main body feels like a suite due to its cohesiveness, and the culminating track provides a fitting finale. It’s ideal for those who favour their sludge and doom metal with an ethereal touch, perfect for those longing for another Isis release or craving some post-metal with an aptitude for difference.