Trending
You are at:Home»Interviews»Mallika Sundaramurthy: “Working as a recording artist and record label helped me see both sides of the music industry.”
By Michael Pementel on April 10, 2017 Interviews

The name Mallika Sundaramurthy might ring a few bells for fans of technical death metal. If you need a hint, look no further than Massachusetts’ very own Abnormality. Those vocals that you absolutely love with their relentless growls and screams… that’s her. Since 2005 she has helped the band rise from the underground, kicking things off with their first studio release Contaminating the Hive Mind. Come 2015, the band signed with the legendary Metal Blade Records, and in the following year released their sophomore effort, Mechanisms of Omniscience. Beyond her brutal vocals, there is more than meets the eye to this artist’s resume. For example, a lot of folks may not know about her career in freelance art. Some may not notice her voice in the first-person-shooter BioShock Infinite. And a lot of folks may be unaware of her kickass extreme metal label Ultimate Massacre Productions.

Originally founded by her husband Serge Rhino in 2012, Ultimate Massacre first started off as a licensed merch supplier for metal bands. Serge (who is also part of slam death metal outfit Epicardiectomy), took on Mexico’s Human Decomposition as the first band he would sign. It was a combination of successfully releasing Human Decomposition’s new record, along with Mallika’s arrival, that would propel the project into a new direction. In the couple’s beginning, Mallika shares, “We thought it would be great to build the label together, combining our collective experience and passion for music to grow Ultimate Massacre.” She continues; “Our main goal is to spread great music that we ourselves love, and to help the bands on our roster to reach new levels.”

That passion certainly worked out for the both of them. In 2015 alone, their label roster went from one band to nine, along with releasing five albums! With Ultimate Massacre headquarters located in Prague, the label line-up contains some of the most brutal and devastating metal from all around the world, including New York’s Hypoxia, Italy’s Natrium, and Germany’s Chordotomy. “Serge and I sign the type of music that we like and that we enjoy playing ourselves: Death Metal!”, Mallika says when discussing the label’s sound. “The majority of our bands are technical, brutal death metal … We aim to release records that we would buy ourselves as fans.” It’s a true sense of teamwork as the couple work together to find the right acts that embody their love for the art form.

It is at once wild and inspirational to hear of two people who dedicate and grind themselves into their passions – talk about a power couple. But with the dedication it takes to run a label and play in bands, how exactly does she manage her time? The real kicker here is that both wife and husband do even more than perform and run a label. Serge is a co-owner of a bar in Prague called Nightmare Horror Bar, and is an owner of another small retail business. Outside of her roles in a band and at the label, Mallika works as a freelance artist. Before taking on Ultimate Massacre or Abnormality, Mallika worked as a full-time artist within the video game industry. In her time working with Harmonix (MTV Games), she found some opportunities to take on PR roles, giving her more exposure to the business side of art. “Working as both a recording artist and a record label has helped me to see both sides of the whole music industry more clearly.” The benefit of these two mindsets has aided her growth in knowing how to embrace creativity and success. “It has helped me to lose some naive notions about the music industry, and to replace that with some cold hard wisdom and knowledge.” 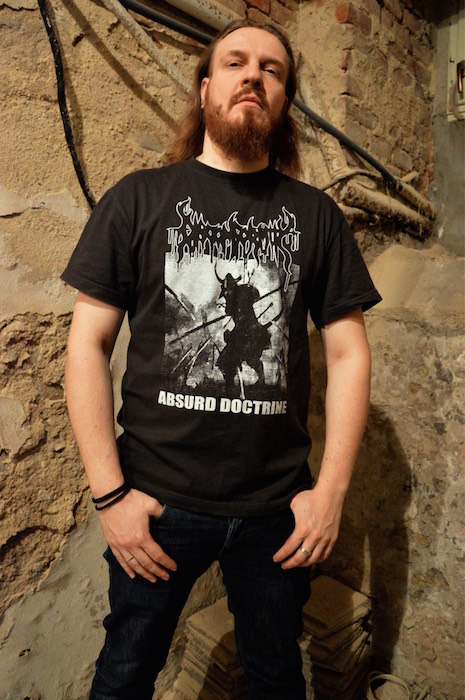 Through her experience in running Ultimate Massacre, she has found a gift in giving back to an art form she loves. “When I became a part of the metal scene, I truly felt that I had found my people.” Further expressing her love for the music, “Metalheads are a tribe of outcasts, where it’s ok to be different, and we all share the love of the music.” She continues with the fact that Ultimate Massacre has allowed her more ways to give back to the bands she enjoys and respects. The label acts as a means for her to connect fans of underground death metal with those talented bands. Mallika and Serge continue working hard in building Ultimate Massacre, recently taking on their friend Ondřej, who works the label’s promotions and PR. By the end of 2017, Mallika hopes to get the Ultimate Massacre Productions name even further out there into the masses. “We have some exciting releases slated for the year from Incontinence, Natrium, Human Decomposition, among others,” she says in sharing some of the label’s goals. “We’d like to see them in some top 10 lists at the end of the year.”

Ultimate Massacre Productions is the embodiment of what makes a label special: it acts as a home for passion and art. Together, Mallika and Serge work endlessly for the joys that art brings with it. This constant pursuit of passion and determination demonstrates admirable qualities that all artists seek to find within themselves. Mallika proves to be an artist dedicated to the hustle, and one that understands the emotional impact of art, while knowing how to get it out there. For artists who have been grinding away for years, or those brand new to the hustle, she believes that a life lived is that of following one’s passions no matter what. For those seeking guidance in their goals, Mallika states: “Life is short and nothing is guaranteed, so you should take chances and spend your energy on what makes you happy.”

Thanks to Mallika for her time in this interview. You can check out Ultimate Massacre Productions on the following links: