First of all, let’s address the elephant in the room: Mammoth Weed Wizard Bastard is a brilliantly awful name for a band. It’s as likely to put people off giving the four-piece a chance as it is to get people interested, but it certainly is memorable. For anyone able to look past the band name, a treasure of down-tuned psychedelic cosmic doom awaits. Y Proffwyd Dwyll (Welsh, loosely translated into English as ‘False Prophet’) is the kind of album that demands a strong reaction; its mix of absolute heaviness and the soaring, ethereal vocals of Jessica Ball are a devastating combination. Whilst musical comparisons to the likes of YOB, Windhand or Sleep are warranted, Mammoth Weed Wizard Bastard are possessed of a distinctive spirit that gives them rare appeal. Put another way, if you’re looking for your new favourite doom band – that moves beyond tired Black Sabbath worship and has more in its arsenal than slow speeds and down-tuned riffs – Mammoth Weed Wizard Bastard are just what you’ve been searching for.

There are a lot of different elements at play on Y Proffwyd Dwyll. As well as the heavy riffs and slow tempos that form the cornerstone of the genre, there’s a strong cosmic vibe throughout. The beautiful vocals might be the most obvious aspect of this, but there are more subtle details that help too, such as the swirling Moog synthesiser movements that pop up, as evidenced towards the end of the title track and during the opening stomp of ‘Gallego’. Many of the riffs and songs are structured in ways that give them the feeling of reaching up for something, both physically and mentally, grasping for wonders both real and imagined that are just out of reach. And it must be noted just how impressive many of these riffs are – after its opening three minutes of sci-fi ambiance and tension building, the riff that crashes in when ‘Testudo’ gets going is an absolute beast, the musical equivalent of a lumbering monster, devouring cities and toppling mountains with utter abandon. As with any doom album worthy of the name though, there’s an abundance of strong riffs, and as such, picking out highlights is kind of pointless – there are just so many of them. 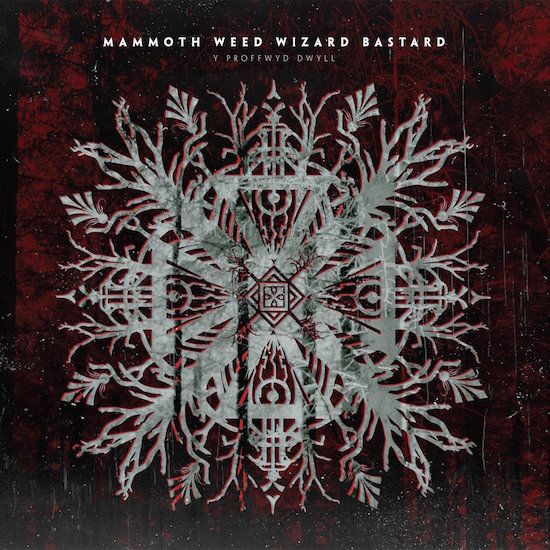 What really makes Y Proffwyd Dwyll such a strong album though, raising it above the competition, are the non-doom aspects to Mammoth Weed Wizard Bastard’s sound. A psychedelic haze permeates the whole album, giving even the most straightforward sections a sense of the otherworldly. Whilst stargazing in doom metal is not unusual, the adventurous feel at points is. Closing track ‘Cithuula’ is the best example of this, with the vocals dropping down from their lofty heights to a touch more earthly and solid, and the song structure feels as if it’s drawing influence from the likes of Cocteau Twins as much as from doom metal.

Though a lot of doom albums are enjoyable enough, they are rarely creations of bands who are truly pushing at the boundaries of what the genre can do musically and emotionally. Cathartic, cosmic doom may not be a wholly new proposition, but with Y Proffwyd Dwyll, Mammoth Weed Wizard Bastard have enough personality, conviction, and talent to make this sub-style of metal their own. Even if their band name might come across like a joke, the music of Mammoth Weed Wizard Bastard is anything but.