Trending
You are at:Home»Interviews»Marko Palmén (Evocation): “We came as close to the perfect guitar tone as one can get.”
By Catherine Fearns on April 5, 2017 Interviews

A worldwide contract signed with Metal Blade records, and new album The Shadow Archetype garnering rave reviews; these are exciting times for Swedish death metallers Evocation. We caught up with guitarist/songwriter/founder member Marko Palmén to find out what we can expect from the group in 2017.

Evocation have been around on-and-off for twenty-five years, but have had major line-up problems in the past; they split in 1993 on the cusp of success due to creative differences, then in 2013 they lost both their drummer and guitarist. But thankfully they persevered, and Marko says the new line-up is the strongest it has ever been. He credits the success of the album’s sound with this unity. “There is definitely some pure magic in the line-up as it is, that’s for sure. I mean, when there are problems in the line-up you can hear it in the output the band makes. And for us the new album is perhaps the strongest we have made to date.”

Marko is a trained psychologist and the Jungian concept for this album came from him, but all the band members contributed to its creation. He and Simon (new guitarist) co-wrote the entire album while Thomas (vocals) wrote all the lyrics and lyrical arrangements. Gustaf (bass) came up with his own basslines while Per Møller Jensen (session drums, ex-The Haunted) did lots of his own arrangements of the demo-drums that were sent to him. “Evocation as a unit has never been before this involved in the creation of an album, and we’re extremely happy and proud of that. The creative process was really smooth and easy. Simon and I shared the same vision and thoughts, and although it took almost two years to write the music, it was never boring or hard work with each other.”

The Shadow Archetype is undoubtedly a classic death metal album, and Evocation have always been loyal to the Swedish death genre, successfully straddling both the Gothenburg and Stockholm camps. However they don’t feel in any way constrained by the conventions of the genre; in fact their stated aim is to stay within those conventions. Says Marko: “We didn’t have any creative restraints as long as we just kept ourselves within the boundaries of death metal. I think that was a huge part of the success behind its amazing outcome. Therefore, I don’t think we will have any restraints on influences in the future either, but I’m sure we will keep our core Death Metal sound and also try and explore areas we haven’t visited before.” There are certainly hints of other influences in the new album – thrash and groove elements – but it is likely that they will remain hints going forward. Evocation are not opposed to exploring other areas – “I think we will make some really noisy grindcore track on the next release, I actually wanted to make one already for this album but we agreed to make one for the next release instead – we always try and make something new with each album.” But they are essentially staying loyal to their true love of pure Swedish death metal.

I ask Marko whether he listens to anything other than metal to inspire him: “I listen to a lot of other types of music, but mostly I like melancholic stuff. Happy music and love songs are examples of music that makes me want to say Shut The Fuck Up!! I guess I’m quite an open-minded person when it comes to music as long as it’s not so happy.” Marko does mention that he’s currently listening to one of Sweden’s most famous musicians: “Sven-Erik Magnusson, who recently passed away aged seventy-four, played in a band called Sven Ingvars that had many hits and just about every Swede knows them. There is something quite melancholic about some of his melodies that really strikes a nerve with me.”

Swedish death metal is epitomised by the chainsaw buzz of the Boss HM-2 pedal, and for Marko “that’s still the foundation, the single most important feature for the Evocation sound. The Boss HM-2 gives a very fat yet fuzzy tone which I love, but the tone is so fat and fuzzy that intricate guitar picking becomes impossible to hear. Therefore you need something else to tighten up the sound. We use the Boss MT-2 (Metal Zone) pedal to do the trick, and as a matter of fact this is the exact same setting as At The Gates use on their legendary Slaughter of the Soul album. Those two pedals are the key ingredient in the guitar tone. I worked many years to make the guitar tone perfect and on The Shadow Archetype I think we came as close to the perfect guitar tone as one can get.” Marko’s passion about achieving the perfect guitar tone is typical of the attention to detail that comes across in the new album, and that has kept Evocation going through the years.

Evocation have announced a release party show on 8th April in their hometown of Boras, but surprisingly there’s nothing else in the official diary at the moment. “We are working on getting festival shows and also perhaps a tour in the autumn if all works out. The band is quite hungry to get out on the road as it is. We haven’t done a single show since 2014 so we are really eager to get out there and show the crowd our new album and our new line up!” 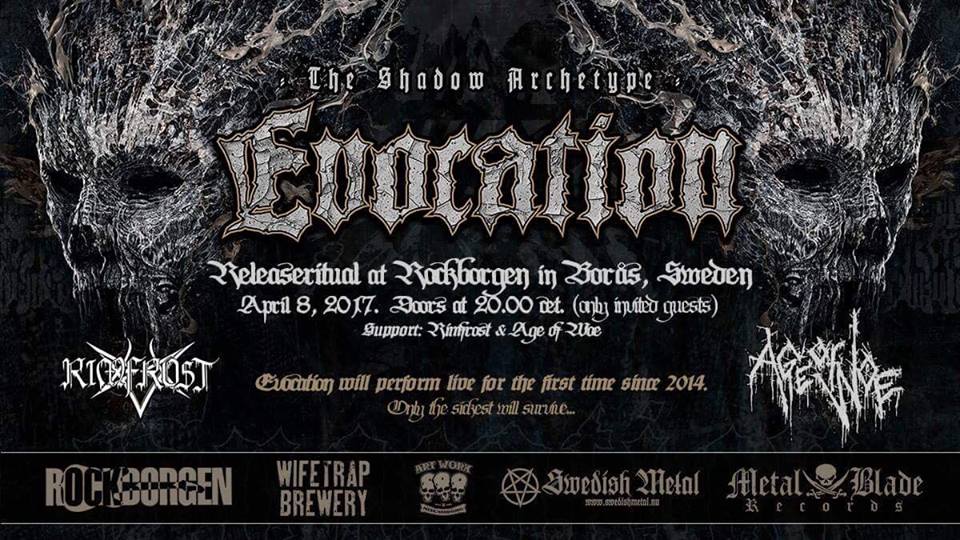 Speaking of new line-ups, Evocation are on the brink of announcing their new drummer, and the rumours circulating on the internet have all been pointing to Fredrik Andersson (ex-Amon Amarth). Marko clears this up for us: “The rumours about Fredrik Andersson are exaggerated, that’s one thing for sure! Fredrik and Evocation are friends since we toured Europe in 2011 together with Amon Amarth. We hang out every now and then and we also jammed together with Fredrik but he won’t be joining Evocation. He is a busy man with a lot of projects so I don’t think it would be even possible for him to join another band. The new drummer for Evocation is still a mystery shrouded in misty fog… all I can say is that it is an extremely competent man that will raise the live appearance for Evocation to a whole new level! We are extremely satisfied with the rehearsals so far and also I might add that he fits perfectly into the Evocation collective!” So no exclusive there – we’ll just have to wait and see…

Marko follows the death metal scene as much as he can, and he feels that it is basically thriving, although there are worrying signs as well. “The growth of new bands is great and there are some really interesting new bands that have emerged the last few years – for instance Firespawn, Vallenfyre, Memoriam and The Lurking Fear. However we also lost a real giant when Bolt Thrower called it quits last year and just recently At The Gates lost one of their main songwriters Anders Björler. So for me there are also worrying signals that make me think about how the future will be for the death metal scene. Perhaps I’m just being alarmist since the regrowth of new bands is so good. But on the other hand will any of these new bands become as big as the giants who are retiring? As the music scene is struggling with revenues and the bands are struggling even more just to make a living, I’m having a real hard time seeing any of these new death metal bands making it to the level that they will ever have music as their income. And it makes me a bit sad to realise that as the old giants retire we will probably never see new bands making it to that level.”

Marko may have concerns about the future of the death metal scene, but with Evocation on their current form, I would say that it’s in safe hands.

Thanks to Marko Palmén for the interview, and Andy Turner for the opportunity. You can check out Evocation on their website, Facebook, and Twitter. For further reading, check out Catherine’s review of The Shadow Archetype here.