Trending
You are at:Home»Features»#MetalBandcampGiftClub: How One Trend Is Set To Rock The Industry
By Angel on January 19, 2016 Features

The power of social media will never cease to amaze, for better or for worse. The speed with which information spreads is unparalleled, especially on a rapid-fire platform as Twitter. A cause can end up growing from a few supporters to – seemingly – the entire Twitterverse. And while many of these causes can result in witch hunts, slander and abuse, there are also many wonderful, uplifting stories on the power of Twitter and how it helps spread worthy causes. This is one of them.

One night in early January, Jeremiah Nelson [Twitter/Bandcamp] sits down and decides to indulge in a remarkably selfless act: he logs onto Bandcamp, browses the wishlists of a couple friends, and sends them each a gift. Call it a belated Christmas gift, if you will. An email pops up in their respective inboxes, and thank yous are sent to him on Twitter, some appending the #NiceMetalTwitter hashtag that is occasionally employed by this loosely-affiliated group of music enthusiasts. An exchange passes between Jeremiah, Manny-O-War [Twitter/Bandcamp], Lindsay Turnbullet [Twitter/Bandcamp] and Seth Werkheiser [Twitter/Bandcamp] which, roughly paraphrasing, asked if this was to become a regular occurrence.

“I put my Bandcamp profile up and said, “Follow me [on Bandcamp], and if you follow me, I’ll follow you, and I’ll retweet that. Then other people will follow you, and we’ll start gifting albums.” And then it was just an avalanche for 48–72 hours. Just insanity.” – Manny-O-War [1]

The snappy hashtag #MetalBandcampGiftClub took off in a way that nobody could have expected. People started receiving albums from acquaintances or even strangers. Some were found and tagged on Twitter, others were thanked into the endless void. I personally received several utterly fantastic releases, and like many others was utterly floored by the kindness shown by these people who in many cases barely knew me. Others were similarly shocked, with some “power-MBGCers” such as Frank Santorelli [Twitter/Bandcamp] receiving special commendation. We all took great delight in promoting this trend as much as possible, and when it hit Twitter’s trending, well that’s when things got crazy. 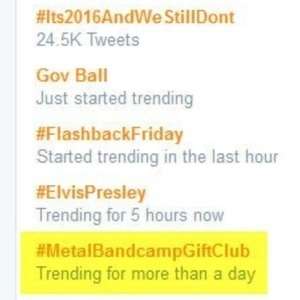 Eventually, of course, Bandcamp themselves caught onto the trend. Megan Osztrosits, vocalist of Couch Slut [Twitter/Bandcamp], contacted them to ask for sales numbers, and was informed that there were over 250 albums gifted via MBGC as of last week. All that from one hashtag.

Needless to say, this is A Very Good Thing. People are willing to commit to buying an album for someone else, a gift that is already wanted (hence the existence of wishlists). Or alternatively recommending something they think the person will like. This gives the recipient new music and a sense of appreciation, and the sender a warm sense of satisfaction. But it goes far beyond this. This trend impacts Bandcamp, metal and the music industry in general.

Case in point: the aforementioned Couch Slut [Bandcamp, NSFW]. The band hit a spike in sales that shot them to Bandcamp’s weekly list of most purchased records. In an interview with Bandcamp, Manny-O-War only semi-jokingly relates a story: “Handshake Inc., a really small label, tweeted out about one of their bands: “Did anything happen to a member of Couch Slut in the last 48 hours?” They legitimately thought that, because of the spike in sales, a member of the band had died.”

This band are not the only ones to experience a spike; Slaves BC [Bandcamp] reported they made more sales in two days of MBGC than in the previous year. Several others doubtlessly doubled their gas money for seemingly inexplicable reasons. [2] Due to Bandcamp’s payment method, this is a fairly high percentage of the sales money going to the bands, not the trickle that iTunes and similar offer on digital sales.

To delve into some simple economics for a second, this has an impact on the wider scale. The more money circulating within the metal “industry”, the less squeaks in the cogs turning. The more fans invest in their bands, the more these bands can plow money into merch, into tours, into creating new music. If a band goes on tour, they can team up with other bands, which spreads the money further. It brings money to venues who book these bands and see a return on concert tickets, because more people know the bands coming through town. It brings money to labels who actually need it (many of the albums sold through MBGC are of smaller artists and labels). In short, this is what keeps music afloat. And while the focus of this hashtag has been on metal-and-related thus far, I cannot see why this won’t expand to a general #BandcampGiftClub.

For the immediate future, there has been a website set up at metalbandcampgiftclub.com and a Twitter page at @metalBCgiftclub. I understand there are plans to set up a calendar where someone can receive gifts on their birthday, which is a wonderful gesture that already occurred to Kevin Hall, the bassist of Couch Slut, and Bruce Fraser [Twitter/Bandcamp].

So, if you value sharing music in a way which makes a tangible difference to those involved in its creation and distribution, this is one incredible cause to put your money into. My heartfelt gratitude to Manny-O-War, Seth, Jeremiah, Lindsay and the others who have been the driving force behind this, as well as those who sent me gifts, and Bandcamp for facilitating this heartwarming revolution. Long may it continue.

FOOTNOTES & FURTHER READING
[1] An interview with the founders of MBGC over at Bandcamp’s blog.

[2] Bands and labels do not see explicitly see sales as part of MBGC unless someone mentions it in the note to the recipient.

Original article by Lindsay on MBGC.

An interview on As The Story Grows with Jeremiah and Manny-O-War.