Trending
You are at:Home»Interviews»Michael Schindl (Impure Wilhelmina): “If my music makes people cry, it is because it is something very sincere.”
By Catherine Fearns on October 13, 2017 Interviews

I never used to be one for subtlety in music. An impatient listener, I always sought out superficial extremes; a quick dose of thrash or grindcore and I was good to go. Mention words like ‘doom’, ‘drone’, ‘post-rock’ – in fact post-anything – and my instinctive reaction would be “Snooze. Let’s put on some Slayer.” But that all changed this summer, when I heard Impure Wilhelmina for the first time. Standing in a rainy tent on a mountaintop at Rock Altitude festival [review here], waves of sound rolled over each other like clouds and I found myself desperately in need of a hug, tears in my eyes for no apparent reason. Never has music evoked such pure sadness in me; but rather than being depressing, it was somehow incredibly comforting and cathartic.

I’m not the only one who feels like this about Impure Wilhelmina, a band which has been described as ‘Switzerland’s best kept secret’. Named after the heroine of Bram Stoker’s Dracula, Impure Wilhelmina is the long-term musical project of Geneva’s Michael Schindl (vocals, guitar, composer). Over the past twenty years there have been several line-up changes, six albums and a gradual sonic evolution from post-hardcore to something more melodic and complex. To call it ‘grown-up metal’ would be doing Impure Wilhelmina a disservice, since that would imply a blandness entirely absent from this driving and forceful melancholia. Newly signed with Season of Mist and with new album Radiation making, ahem, waves in the music press, it may be time for a new era of prominence in Impure Wilhelmina’s journey.

I first met Michael Schindl after his performance at Rock Altitude, where we chatted in the impossibly noisy performers’ tent while Zeal & Ardor shook the mountain to its core in the background. We met again this week at an artists’ café in the shadow of L’Usine, the ancestral home of Geneva’s underground music scene and the venue for the release party of Wilhelmina’s new album. I wanted to know if Michael could pinpoint the essence of his music that makes it so desperately moving? “It comes naturally – I don’t have pre-established plans, I compose riffs as I feel them, and then if it particularly touches you that makes me very happy! If it makes people cry, it is because it is something very sincere; it touches people because it’s not artificial, it’s something that I genuinely feel and want to express.”

Impure Wilhelmina started on the Geneva scene at the same time as a raft of other local bands playing more extreme forms of metal, so they were given the label ‘post-hardcore’ even though it doesn’t adequately describe their music, particularly as it has evolved over the years. “Regarding post-hardcore, I don’t know why we were labelled as post-hardcore, except that ten, fifteen years ago, there were lots of groups coming out of this area, who were qualified as hardcore, and we formed part of this tribe of groups – Nostromo, Knut – we knew them because we were all from Geneva – but it is very different music I find… And we have certainly evolved, we have become more melodic.”

I have read Impure Wilhelmina’s music described as doom, post-rock, alternative rock, drone, sludge, even indie, but in reality it both refers to and transcends all these subgenres. Possibly the closest comparison in terms of similar bands would be Katatonia. Music journalists and fans do have an annoying need to categorise though, so while it is probably a question that most musicians hate: which subgenre would Michael prefer to be in? “It would be very difficult to say… it was certainly lots of indie groups twenty years ago that inspired me to make music, and particularly the doom scene – Paradise Lost, My Dying Bride – that influenced me. So I would say that I came from that side – doom, UK doom.”

There is undoubtedly an indie element to Michael’s voice, which has a certain naivety and detachment reminiscent of Morrissey and Joy Division, giving an honesty to the music. Growled vocals were most prominent in Impure Wilhelmina’s early albums, but clean singing dominates now, and Michael sings in an English accent with very clear diction. I suggest that singing clean requires more confidence and courage, particularly when the lyrics are so personal. “It’s true that since I have been singing clean, I have thought much more carefully about the words… but I find that’s a good thing. It’s not something I exclude, going back to growls, I don’t know, maybe in the future I will want to do more growls and I leave myself free to do that.”

I wonder if singing, and indeed writing, in a foreign language (Michael is francophone) possibly gives him more freedom, in that it detaches him slightly from the nuances of language that might otherwise hold him back. “Yes, I think it makes it more poignant. I think the naivety, the detachment, it’s partly because my English is not so good, and if I was singing in French I would be much more pointed with the vocabulary. So in this sense I have more freedom.”

Radiation, Impure Wilhelmina’s sixth album, was released in July this year to widespread acclaim. As always it was produced by Serge Morattel, Michael’s longterm collaborator at REC Studio, but it represents a significant development in the band’s sound which is best described as a deepened emotional intensity. The album’s title does not refer directly to any of the songs, but rather is designed to capture the spirit of the album. And the notion of waves could not be more appropriate. “With the title Radiation – the music is very charged with emotion. The word has a dark side, and we wanted to hint at something evil, something dangerous… but it’s also something natural. Of course the sun radiates, and we wanted to get that warmth across as well. Lots of people say that to understand our albums, you have to return to them several times, like a book. You discover something new each time.”

Backstage at Rock Altitude this summer I noticed an unmistakeable reverence for Michael Schindl; all the Swiss bands I spoke to cited him as someone whose commitment and independent vision have inspired them. However Impure Wilhelmina have been relatively unknown internationally. This is due partly to the nature of the music industry in Switzerland; despite high levels of music tuition for young people, few are encouraged to consider music as a career in itself. Michael is a maths and science teacher in a high school, and the rest of the band also work full-time, meaning that Impure Wilhelmina has to come second. Touring is particularly complicated, and indeed their forthcoming European tour has been scheduled to coincide with the school half-term. But by their own admission Impure Wilhelmina have also been reticent about publicity; they are a modest band, this modesty in itself a very Swiss characteristic. ‘We are very bad at publicity!’ says Michael with a nod. “It’s true, we always worked with very small labels, with friends.. in fact it was Season of Mist who came to us and signed us, because they heard Black Honey [the band’s previous album]. And we are very happy they did!” 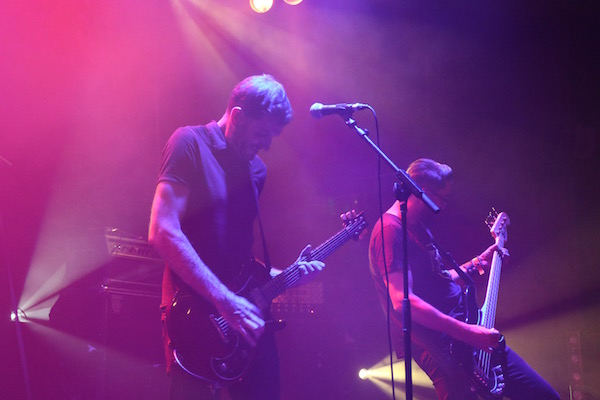 Fast forward two days, and I am at L’Usine, the former factory on the banks of the Rhone that continues to attract the most exciting names in music. This month alone will see Paradise Lost, Pallbearer, Grand Magus and The Botanist perform there; but tonight is all about local heroes. The venue is full, unusual for Geneva on a Wednesday night, and the atmosphere is one of great affection. After the first track someone shouts “J’ai pleuré, c’est normal?” (transl: “I was crying, is that normal?”) Clearly I’m not the only one. “Ah, tu es trop sensible,” replies Michael (“Ah, you’re too sensitive.”). The concert is a showcase for the new album, and the set begins with the first track from Radiation, ‘Great Falls of Death’, followed by other stand-out tracks including ‘Meaningless Memories’ and ‘Torn’. Impure Wilhelmina are a charismatic band to watch onstage, with an ominous driving force behind their melancholic restraint. Guitar tones, whether clean or distorted, are set to retain a fuzzy naturalness, and bassist Sebastien Dutruel brings a lot of metal energy to proceedings. The climax of the set is the heartbreaking ‘Murderers’. I’m obsessed with this powerful track, and when those growled vocals kick in I start to well up again. Must be something in my eye.

With Season of Mist behind them, these Swiss underdogs may be about to have their day. A string of European tour dates will follow for Impure Wilhelmina this October, including a night at London’s Underworld, and I would urge metal fans of all persuasions to check them out. Whatever your subgenre of choice, Impure Wilhelmina will open your mind to previously untapped levels of musical affect.

Our thanks to Michael for his time. You can check out Impure Wilhelmina via their website or Facebook, and buy their music at Season of Mist’s webshop or the band’s Bandcamp page.