With New Zealand’s sparse population and geographical remoteness, its relative lack of musical productivity is more than compensated by the sheer quality of its artists. The world of instrumental rock is no exception, and with the likes of Jakob [1], Kerretta [2] and The Shocking and Stunning [3] having become beacons of excellence and hope within what many claim is a decaying genre, they serve as a constant reminder that post-rock is far from dead.

Auckland’s Mothra are a more immediate prospect than the aforementioned, challenging the conventional hallmarks of the genre in a similar way to Russian Circles and their metal-tinged persona, yet they possess a sound that just as regularly conjures Lateralus-era Tool and the modern progressive leanings of Porcupine Tree, all the while managing to pull all of those sounds into a personally crafted creative force that comfortably bears its own identity.

The key to the success of debut album Decision Process is, whilst radiating delightfully wistful and explorative nuances in places, it excels at maintaining an edge-of-your-seat, perpetually energetic and dynamic approach throughout, and while rhythmically complex, the band’s infectious songwriting makes the record a consistently gratifying listening experience.

Constructing the songs around hulking guitar riffs, sprawling soundscapes and off-kilter time signatures, Mothra waste no time in getting down to business, and this in itself is a welcome trait in a genre often littered with pretentiousness and procrastination. Opening trio ‘Awake the Machine’, ‘The Beginning’ and ‘Splinters’ are all instant attention-grabbers, the warm production values accentuating the vastness within the controlled chaos, and the relentless vigour that radiates. 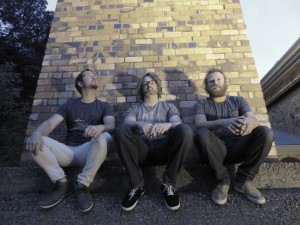 With Decision Process clocking in at an eye-watering seventy minutes [4], the natural expectation might be for the album to simmer down, find its feet and become lost within itself; mercifully, this does not occur. Songs like ‘The Window’ and the wonderfully enthusiastic ‘Cataclysm’ appear much later on, yet they stand up to anything else on the album for engaging, riff-oriented songwriting that reinforces just how good Mothra are at writing and performing with levels of conviction and confidence that see those seventy minutes pass in a heartbeat.

Investing time in Decision Process may well be a daunting prospect (or not – the overwhelming success of Lateralus [5] is well documented). Yet even its length cannot detract from the album’s hypnotic allure, and the combination of exceptional percussion, forward-thinking riffing and technical groove grabs hold and refuses to let go for well over an hour.

To simultaneously craft music that is both technically astute and accessible is a significant part of what makes bands such as Tool so widely adored, and with Decision Process it certainly feels like Mothra have pointed themselves in the right direction. Their immediacy becomes their strength; their rhythmic fortitude their trademark. In a year when whispers of a new Tool album have been silenced yet again, fans of superbly constructed, progressive heavy rock are looking for a serious fix, and Mothra could well be the saviours we’ve been waiting for. Go out and listen to Decision Process, go out and buy it; go out and make this band huge.