Noise, industrial, experimental, post-grindcore, post-punk: there are a plethora of metal subgenres that could be applied to Dark Black, the third offering from Ginger Wildheart’s Mutation project. But none of these categories really does justice to what is the one of the most exhilarating pieces of sonic architecture to be released this year. Who knew noisy extreme metal could have such hooks and melodies? Who knew grindcore could have cinematic synths? And who knew a nice school-mum could have the damned catchy chorus “fuck off you cunt, you are an irritant” stuck in her head?

Best known for his Britrock band The Wildhearts, Ginger has formed multiple side projects over the years, and Mutation is his extreme metal incarnation, created and released via pledge funding. Mutation is something of a supergroup: Dark Black was co-written with Scott Lee Andrews (Exit International/Jaw of Death), and features Devin Townsend (Strapping Young Lad, Devin Townsend Band/Project), Phil Campbell (Motörhead), Givvi Flynn (The Dowling Poole, The Wildhearts) and Jon Poole (Cardiacs). Ginger’s extraordinary versatility is exemplified by the fact that he also has a country album out at the moment; [1] however Dark Black is about as far from country music as you can get. 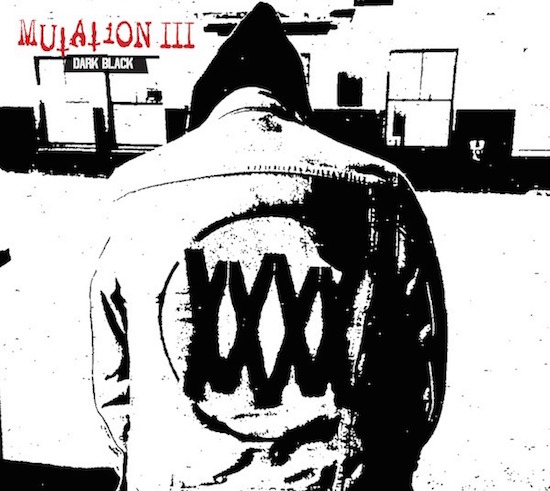 Dark Black is really one single unit of work, and demands to be listened to in one go. The album begins with a one-sentence spoken word introduction, establishing the album’s overarching theme of depression: ‘It is the grey cloud that comes over you and obscures all positive thought.’ It then launches into three tracks which have absolutely no breaks between them. The words ‘relentless’ and ‘assault’ are very clichéd descriptions for extreme metal, but it’s hard not to fall back on them as this album pummels its way through. It’s an exhausting, challenging listen in the best way possible; its frantic pace and pace-changes are eye-popping and leave you feeling almost breathless.

First track ‘Authenticity’ combines complex, disorienting time signatures with industrial effects and frenetic riffs. ‘Toxins’ keeps a regular time signature but is an equally shocking ride for the senses; raw production somehow combined with space-age effects, and just when you think the riffs can’t get any faster or dirtier, they do. There’s no pause for breath before ‘Devolution’, but this track suddenly brings a different feel to the album. Featuring Devin Townsend, it successfully combines brutal rawness with beautifully cinematic synths. ‘Devolution’ is definitely my favourite piece and would be perfect on a movie soundtrack.

There’s a strong element of punk to the album, exemplified by ‘Skint’, ‘HATE’, and most of all by ‘Irritant’, which is the closest Dark Black has to a sing-a-long. Released as a video back in January, its delightfully expletive-laden chorus is an absolute earworm.

Some may find Dark Black even less accessible than the previous Mutation albums – it’s heavier, noisier and more industrial, and some sections are almost unlistenable – with vocals mixed to sound distant. But there’s also an unmistakeable bounce and sense of fun. Despite the dark subject matter and lyrics, Ginger et al just can’t resist a groovy riff and a catchy hook. They throw in choral passages, poignant wall-of-sound bridges, computer noises; a hugely varied soundscape within this short album, and all underscored by supremely confident musicianship. It’s the inherent playfulness which makes this album a success. It feels as if they are experimenting with how far they can push the listener, how much craziness can they get away with – except that there is an underlying structure. Final track ‘Deterioration‘ hurtles towards an extended cloud of white noise that is almost unbearable, yet somehow necessary.

On his website, Ginger says of Dark Black that he tried to “wrestle mental health issues into sonic form,” and this is an excellent description of the album. If you struggle with this on first listen, try again – it’s infectious, and you’ll find it the perfect soundtrack to the madness of 2017.

Footnotes:
1. http://www.pledgemusic.com/projects/ghost-in-the-tanglewood. Some of the proceeds will go to the Samaritans.