Supergroups can often be hit-and-miss; the hype of a convergence (pun intended) of musical mastery can often lead to either an underwhelming band whose chemistry is non-existent, or can alternatively be mind-exploding examples of musicianship and skill. So when drummer Ben Koller (Converge) and vocalist/guitarist Steve Brodsky (Cave In) unexpectedly formed Mutoid Man as a two-piece back in 2013, releasing an EP entitled Helium Head that – despite its lack of bass-grounding – sounded as huge as the duo’s respective bands, the addition of low-ender Nick Cageo from Brooklyn-based power thrash group Brohammer to work on new album Bleeder certainly appealed to many.

The result? Bleeder is loud, it’s heavy and it’s got absolutely huge riffs. The three-piece pull out a pristine example of complex rhythmical changes, melodic and tasty solos, whilst rounding this all off with great songwriting. Steve Brodsky’s vocals (and guitar work) offer a different tint to the slightly more chaotic delivery on Helium Head. Bleeder‘s first track ‘Bridgeburner’ sets the tone of what we are to expect: the introduction of the bass straight off the bat showcases a fuzzy low-end, before a strong riff kicks off in a Led Zeppelin-styled, 70s-influenced psych-groove. With catchy lyrics of “bridges will burn, we’re best friends forever/Someday I’ll learn, AKA, never!,” ‘Bridgeburner’ not only succeeds as a fantastic opener, but also as a display of what to expect from the rest of the half-hour runtime. There’s even a half-time, harmonised middle-section which points more influence to Van Halen than the more psychedelic, stoner influences that the album brings to the table.

This is definitely one of the most interesting aspects to the LP – its eclecticism. Yet despite its dexterity and genre-jumping, the 10 songs are unfailingly consistent, as some hold more to the likes of Truckfighters or Kyuss, whilst others display the properties of Black Sabbath and Iron Maiden. Heaviness is still at the root of their sound, with ‘Dead Dreams’ and ‘Beast’ showing the brutal, speed-defying riffs, whilst opener ‘Bridgeburner’ and ‘Soft Spot in my Skull’ bring an addition of dynamically infused tempo-changing rock ‘n’ roll. Meanwhile, the vocals on tracks like ‘Reptilian Soul’ enable Brodsky to show his prowess; from the powerful verse to the soaring segues (and even the ability to use falsetto and whispering), he crafts melodies that are as sing-able and it is danceable. 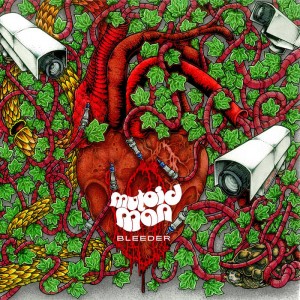 As cliché as it sounds, every track contains a distinctive flow and reaches a different destination. Whether in ‘Sweet Ivy”s mysterious opening diminished chord, or the crescendo closer ‘Bleeder’, the album weaves its way through many different styles, textures and soundscapes to create something that, although clearly inspired by some of the great metal giants, is not contrived and feels fresh and original. An addition of mathcore, with hints to the likes of The Dillinger Escape Plan and even The Fall of Troy, with a considerably more groove-based, desert-rock feel, make Bleeder feel both familiar and unfamiliar all at the same time. This is most evident on “Surveillance”, which frequently unhinges itself with stabs, screams and tempo changes galore – Mutoid Man’s ability to be pleasantly unpredictable is bar none. As far as songwriting goes, this is some of the best groove, math, stoner (whatever prefix you want to add) metal you’ll hear this year.

Intriguingly, the production of Kurt Ballou on the LP still makes even the gentler parts sound hefty. Now, this isn’t in the way that Metallica’s producer abused their songs to sonic madness [1]; the intensity within Bleeder is loud in the best way possible. And it’s not so over-the-top that you get tired – everything is crystal-clear, with the drums booming, the guitars sitting tightly, the bass pushing its way straight into your face and the vocals never sounding too strained or too forced. With a strong focus on rhythm and melody, the mix brings out the musicianship in the best way possible.

Overall, it’s very difficult to critique Bleeder in anything but a positive light. Its mix of psychedelic, stoner rock, thrash and mathcore, allow for an album that ticks all the right boxes for metalheads who don’t want another classic-rock throwback or another pseudo-metal hardcore album, but can draw influences from these quarters. Its dexterity may confuse a few, but the band’s ability to explore a wide-range of influences whilst remaining cohesive in theme is Mutoid Man’s definitive trope. So, if you’re looking for something heavy, groove-based and good fun, with plenty of musicality and brilliant song-writing, look no further than Bleeder.