Iceland’s scene has seen some of the strongest releases of black metal for the past few years. The cold, secluded island harbours some truly dark sounds, with an air of mystique comparable to that of the Norwegian second wave. While acts like Svartidauði and Wormlust have already been releasing material for around 10 years, a more recent crop of acts has brought with it a musical and aesthetic style which evokes the dark theatrics the genre became known for, though notably still unique. Themes of Satanism, occultism and murder are substituted for a more nihilistic worldview; the futility of life and its inevitable end. Further differentiating itself from the notoriously self-antagonistic Norwegian scene is the Icelanders’ sense of community in its tight-knit group of musicians; it is not uncommon to see musicians sharing their talents across numerous projects [1]. Naðra stand at the centre of this circle, a culmination of individuals from Carpe Noctem, Misþyrming and doom metal group O. On Allir Vegir Til Glötunar, such talent is not wasted. Not only does the album aptly capture the pessimistic despair and immensity present in so many Icelandic acts with its dark melody and cavernous atmosphere, but the group executes their style in such a vigorous manner.

This album pulls no punches. Opening track ‘Fjallið’ launches immediately into a wave of ferocious blast beat drumming, pained screams and woeful guitar leads. It’s clear that Naðra are influenced by the old Norwegian formula – as this record is haunted by subtle homages to the discordant sounds of its traditional roots – while also finding its own unique misery and viscerality in its brutish delivery and powerful melody. ‘Sál’ in particular takes a slower mid-tempo approach allowing for truly miserable melody, rather than an overly nostalgic attempt to sound ‘cold’ or ‘evil’, Naðra convey a more emotionally charged and frustrated tone above anything else.

Aside from this, of note is the band’s usage of dynamics, possibly best exhibited by the centrepiece, the 14-minute epic ‘Falið’, riding through tempo changes in each passage with an unstoppable momentum. This too is evident on the closing track ‘Fallið’, offering a rare moment of silence in a short acoustic guitar interlude in the midst of the most intense song on the album. As the album draws to an extraordinary conclusion, an unmistakable Ulver influence becomes apparent, utilising these quickly arpeggiated acoustic guitar chords to accentuate the intensity of the main body of the song. 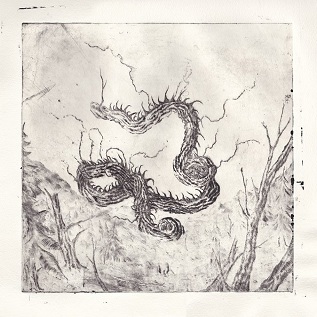 Naðra and the rest of the Icelandic scene have already formed an identifiable sound, slowly but surely establishing the country’s place in the global metal scene. Though it is not unlike other regional scenes with its members’ usage of pseudonyms and stage theatrics [1], the authenticity of it all is expressed through its prolific use of their native Icelandic language. One doesn’t have to be particularly observant to notice that the song titles feature subtle alterations of words, though in doing so their meanings are changed entirely (‘Fjallið’ for instance translates as ‘Mountain’, while ‘Falið’ translates as ‘Hidden’). Though the lyrical content of these songs remains to be deduced by non-natives, this cryptic usage of the band’s mother tongue only raises more questions about their intentions.

Ultimately, this new project’s release not only captures the raw and primitive aggression so typical of black metal, but does so in a unique fashion. This, on top of the intriguing aura surrounding this group of musicians, makes Allir Vegir Til Glötunar a highly compelling release.