Despite their punishing musical tendencies, Californian group Nails have generated widespread acclaim and appeal from all corners of the extreme music realm. With a sound which can simply be described as falling on the cusp of punk and metal, with influences ranging from grindcore and powerviolence, to European death metal, crust and hardcore, Nails have reaped the rewards of generating crossover appeal, resulting in a varied fanbase from mosh loving hardcore kids to metalheads and grind enthusiasts. With their third album You Will Never Be One Of Us, Nails resume revelling in their extremity, yet add crucial elements of change to their formula including throwbacks to early thrash metal, clever production elements, and adding more fury to their infamous caustic vocals. It’s an album that constantly mutates amongst its chaos, warping fluidly from one brief section to the next: ridiculously fast tempos distort into double-kick breakdowns which weave into groovy, chugging fragments. You Will Never Be One Of Us is Nails’ most frenzied outing yet, featuring the most in-track variation comparatively to the straight-up noisy powerviolence of Unsilent Death and the earworm-inducing grooves of Abandon All Life.

The title of You Will Never Be One Of Us suggests a perceived exclusivity, but it’s an inclusive affirmation for those who devote their life to making music and the fans that allow for its existence [1]. It’s hammered into the essence of the album, opening with a repeating mantra (featuring famous fans such as Converge’s Jacob Bannon and Baroness’ John Baizley) of the title track, leading into the first dose of blistering belligerence. Nails’ principal variation in You Will Never Be One Of Us is the unmistakable 80s thrash metal influence. The double kick drums mirror early Sepultura whilst the wild, atonal guitar solos in ‘Made To Make You Fall’ are an obvious nod to Slayer, realised in ‘Violence Is Forever’ where all other instrumentation fades out, leaving only a chaotic guitar freak out. Rhythmic barks of repeated rhetoric add a bizarre sense of catchiness to ‘Life Is A Death Sentence’ and despite the breakneck powerviolence pace, Nails have the ability to create tension with suspenseful pauses in instrumentation, which often lead to superbly executed breakdowns (notably heard in ‘Into Quietus’). Kurt Ballou returns for production duties [2] and once again, he brings out the best in Nails; having the scope to gauge the perfect tone (which in Nails’ case, draws from the bass-heavy lows of crust punk), capture the emotion and provide studio trickery such as fade-outs which juxtapose the propelling energy of Nails’ work. 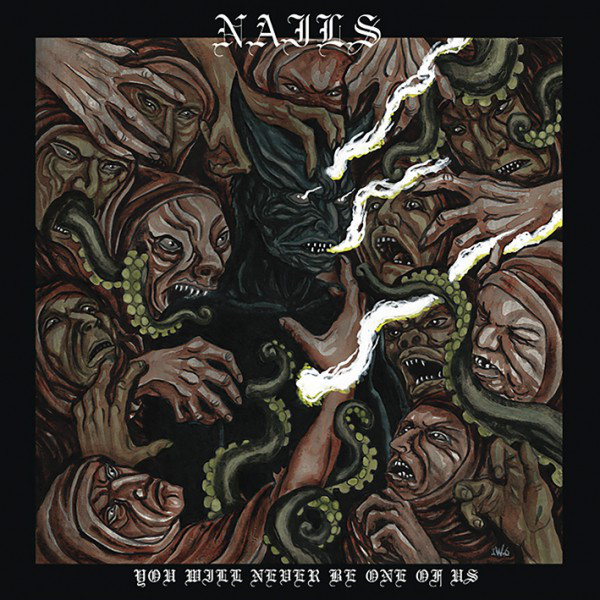 Although just shy of 22 minutes in length, You Will Never Be One Of Us is Nails’ longest record to date. The band are notorious for their immediacy, culminating in an impactful and precise short-sharp-shock (their debut was under 14 minutes long and the follow up was just 3 minutes longer). Nails execute this trait again on You Will Never Be One Of Us with most tracks clocking in at under two minutes or less but close on the ambitious 8-minute opus, ‘They Come Crawling Back’. Although it may garner comparisons to Abandon All Life’s finale ‘Suum Cique’ due to its length and sludge influence, ‘They Come Crawling Back’ turns it up a notch by increasing the chaos and discordance, allowing for expansion to their shapeshifting prowess [3].

You Will Never Be One Of Us cements Nails as one of the greatest bands in contemporary extreme music. In the melting pot of genres it embraces, paired with its theme and lyrical content, the album serves a testament to the fans and musicians alike that allow the scenes it encompasses to thrive. Nails continue to celebrate their fury and stick to the immediacy yet add enough variation to allow for a retrospective sense of diversity in their already impressive discography. If you’re looking for a record that borders on sadistic in its heaviness, then look no further; you’ve just found your album of the year!

[1] Nails delve into the implication of title of the album and song in the making of documentary for the album, available on YouTube here.
[2] The Converge guitarist is a renowned producer for similar purveyors in fast paced intensity such as Oathbreaker, Trap Them and Magrudergrind, in addition to High on Fire and Mutoid Man.
[3] The final three minutes of ‘They Come Crawling Back’ is a cover of Dead Black’s ‘Outro’ which was chosen for their curation of the Sonic Cathedrals mixtape for CVLT Nation, available here.