Despite making no claims to any kind of patriotism, it does my heart good to see and hear local South African metal bands writing and recording quality music. Perhaps it is a ‘triumph against all odds’ thing, given the censorship and close-mindedness of the country’s past, but when bands like Wildernessking, Boargazm and Vulvodynia are mentioned in international press [1] or announce tours in foreign countries, I feel proud to belong to the same subculture as these fine examples. Their successes pave the way for a lot of up-and-comers and Nephilim, from Durban, are one of these. Their 2015 album, Beg For Your God, succeeds a 2012 untitled demo EP [2], and follows a trend begun back then of brutal death metal with an industrial edge.

What does set Beg For Your God aside from most brutal death and slam acts is (ahem) a softer side. Hard as this may be to believe, given song titles like ‘Scalpal (sic) to a Skin Canvas’, there is a yin to the yang made manifest in the grinding music and lyrics that border more on depressive black metal – especially where said scalpel is aimed at one’s own flesh – than brutal death. Taking their cue from any number of ‘core acts, Nephilim employ melodic leads and clean vocals to soften the blow of downtuned riffs, in much the same fashion as another industrial death metal act, The Project Hate MCMXCIX. The introduction of unexpected tempo changes (‘Suicide Awaits’ delivers some interludes that border on breakdown territory) and some surprisingly sensitive string arrangements (see ‘Eradication ov Human Filth’ particularly) add dynamism and allow the listener to catch their breath. ‘Interlude’, the last proper track [3] of the album also breaks the brutal death mould and delivers an ambient instrumental close built around a tapped lead melody. Sadly, this last is marred by less attention to the drum programming than employed on the remainder of the album. It is also a strange choice for an album closer, using what could work more effectively as an introduction than as a summation. 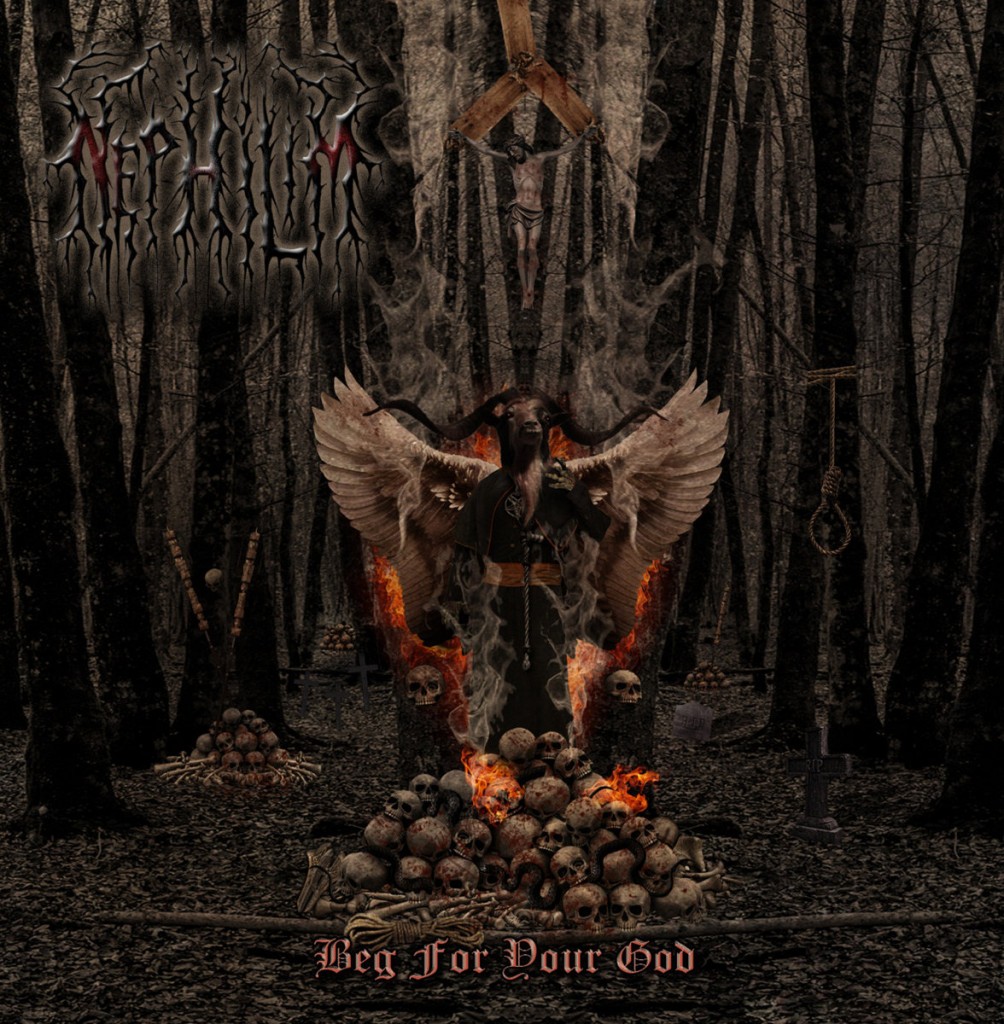 There are two very important things to keep in mind when listening to this album: firstly, despite the ‘softness’ mentioned above, it is not friendly. In fact, it’s heavier than a lead sandwich and just as unforgiving. Secondly, it’s entirely self-produced by the two musicians responsible for all the instruments, composition and arrangement, Nihil and Pravus. So a relatively primitive sound in terms of production quality can be forgiven. Another side effect (although not necessarily a negative one as it adds dimension) is a quasi-industrial overtone: while the drums are punishing and carry pinpoint accuracy, they do come across as unmistakeably electronic, especially on ‘Wasteland for the Worthless’. Ambient sound effects, employed to best effect on the opening and closing tracks ‘Only the Dead Find Peace’ and ‘Interlude’, reinforce this impression. As a result, favourable comparisons can easily be drawn to a number of other established industrial extreme metal artists like Mysticum or even early Fear Factory.

Apart from the pedestrian mastering, the only real downside to Nephilim’s music is the arrangement: guitar leads jump out of nowhere and disappear almost as quickly as they arrive. As my tastes come from a raw black metal background, I appreciate that less attention is given across the whole album to thrash-esque leads, but they could have been left off entirely on tracks like ‘Only the Dead Find Peace’.

In summation, Nephilim might not be doing what they love as much as what they need to be doing to exorcise their personal demons (given the vitriolic lyrical content), but they are not afraid to try new things and ignore genre boundaries in the process. What they could really benefit from, however, is a live drummer and, consequently, live shows. There is enough raw emotion being vented across this album to make for an intense live experience. This will, in turn, generate funds to get more studio time and better mastering on their next album. The authenticity of this venomous misanthropy is what ultimately saves Beg For Your God and (fairly ironically, given the lyrical themes of confusion, hate and pain) gives the band hope for the future.

FOOTNOTES
1. Wildernessking are favourites of Kim Kelly, as this article for Vice confirms, and their latest album, Mystical Future was very well received by Metal Injection, as can be read here. Vulvodynia too have had their fair share of praise, such as this MetalInjection article. Boargazm, while not receiving as much international press have toured Central America in 2013 and Russia with Enthroned in 2015. They also supported Brazil’s Nervo Chaos on the African leg of their 2016 international tour.
2. This EP is available for free legal download on MediaFire – the highlight being the Six Feet Under cover, ‘Silent Violence’.
3. A bonus cover track, ‘Spheres of Madness’ (originally by Decapitated) is the twelfth track on the album, but feels separate to the rest of the tracklist. Despite sharing the same tuning and drum sounds, the Polish tech-death outfit’s song displays a better sense of arrangement than Nephilim manage.